'good-bye to the scorpion'

This is my first poem for NaPoWriMo - which is basically a challenge to write a poem a day throughout April. I intend to use ReadWritePoem for support and encouragement.

And I've found over on Joanne Preston's blog, 'A Dark Feathered Art', some more ideas with a New Zealand twist.

We are going away for most of Easter, so I won't post the poems I write then until after we get back.
This first poem to launch NaNoWriMo for me, I've written for our son who for the past three months has been living and working in the desert somewhere in Mexico. He is due any day now to leave there with plans to make a beeline for the sea - in fact, any body of water will do, he said. 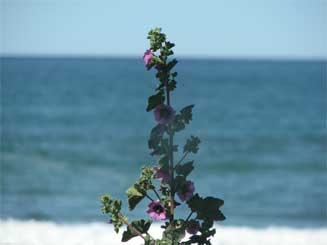 'good-bye to the scorpion'
for Chris
He longs for the coast again,
to taste that accidental brush
with salt on skin, that sound
of the world tipping itself out.
He's ready to say good-bye
to the scorpion, the starving foal,
the starry map of night, thorny cactus
with milk for blood,
and head down any road that leads
to where the land eventually
slips into blue liquid.
He knows now the fire
of the sun is no cheaper
wherever you find yourself.
He's ready now to trade,
heat for squall, dust for sand.
Kay McKenzie Cooke
***
- April 01, 2010

I love this poem. I wen for a walk along our coast, on a rough day last week. The sound of the sea has always drawn me.

Catherine - Thank you for that. Just the fact that an image has stuck for you, makes me feel good about what I wrote.

Carole - Yes i just love the sound of the sea.

Sorry people - the Cartoon Moon is my son's blog and I didn't realise he hadn't signed out and so I inadvertently commented under his blog ... It was me! not Mike.