How I Made My Mother Walk In The Heat 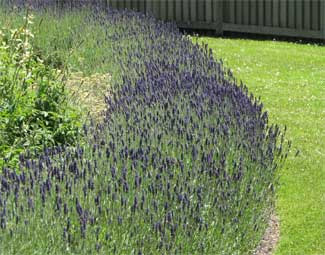 Let's make the most of the sunshine while it's here and go out for lunch, I suggest to my mother. We head for the Gardens, following a lavender trail, to reach the rose garden 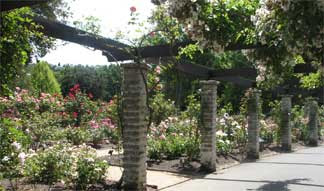 where we spend a dreamy few minutes admiring the colours, scents and varieties. 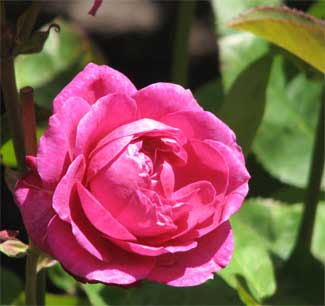 My mother comments that she'd heard that roses are so popular because they remind men of women's breasts. Okay. Didn't know that Mum. And cabbages too, Mum said. Okay ... didn't know that either. 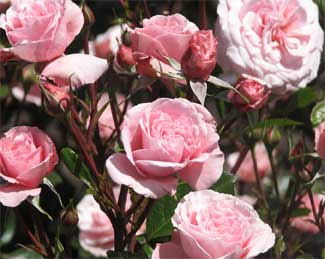 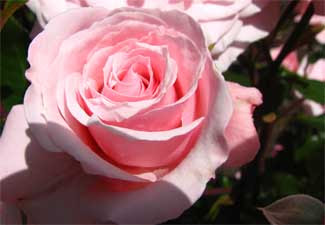 Mum is very patient while I take my shots. You and your sister are both the same she said, always taking photos of the roses. 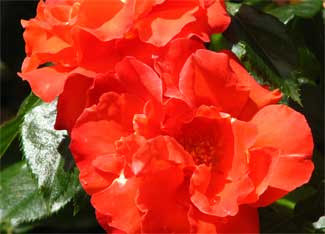 This one was called Disco Dancer. The sun was very warm. Luckily we both had our hats on.
A young mother who is trying to persuade her small, squirming son to wear his sun-hat, points us out.
"Look! Those two ladies have their hats on." (She didn't say 'two old ladies' did she?)
We head towards where we believe we can get a cup of tea and a sit down. 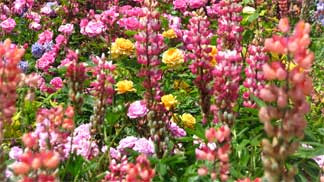 Now that is the kind of garden I would love, I say. A wild, English country garden ... 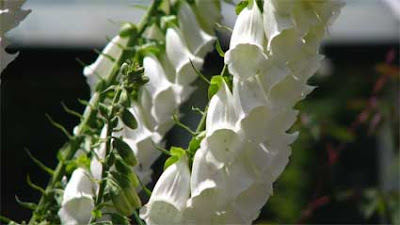 Look at those foxgloves! 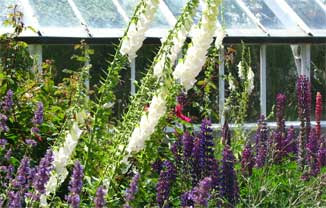 And lupins!
Dammit, the cafe is closed.
Mum needs a sit down. She wants to sit under the tree by the frisbee throwers, but I say No let's push on to another seat over under the oaks. I don't trust those frisbee throwers.
When we finally get there, we find the seat nearby occupied by a sixty-something year old man in a schoolboy's hat, shorts, long school socks and a scarf. He's eating sandwiches and drinking tea from a thermos. "Happy New Year!" he says cheerfully. Maybe we should have sat by the frisbee throwers after all. (At least it's not like in Japan where some eccentric middle-aged men dress up as schoolgirls!)
Still nothing to eat or drink. I head for the world's steepest street and a cafe out that way that might be open or might not. 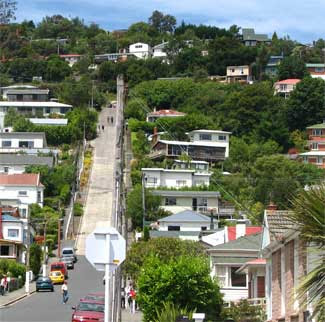 It wasn't. Mum had never seen the steepest street in the world.
It is pretty steep, she says. Then she says that she's feeling a little dizzy. 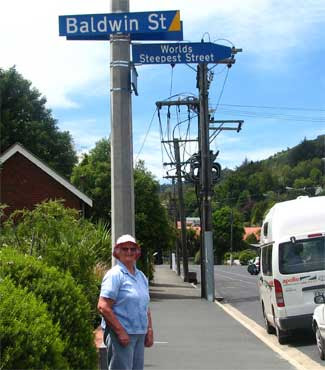 "Must be the heat, " she says.
I never thought I'd hear my mother admit that Dunedin was hot. We head for McDonalds.
I'd like a Big Mac and a milkshake, Mum says.
We eat it in the car on John Wilson Drive with its ocean views. We have the windows wound down so we can hear the waves and get some relief from the heat. (With our unreliable summers, I feel I need to use that word 'heat' as often as I can, while I can.) 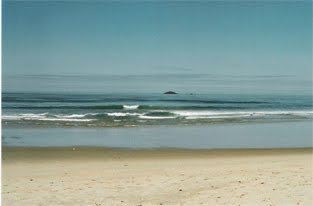 "That was lovely," Mum said as we pulled up at our house. I was relieved to hear it.
My sister texted me - You made our mother walk in 28 degree heat!
Maybe I need a little more practice at taking my 79 year old mother for a walk. (Difficult to achieve when she lives in the North Island and I live in the South Island). She's gone now to stay with my brother and his wife for a couple of days. They told her that they have put a couch out on their front verandah for her to sit in the sun and read. There is also mention of a hammock. But we all agree that there may be some difficulty in getting her out of it again! We chuckle at our mental pictures of Mum being unceremoniously tipped out and left stranded on her tummy. (Well, that was my mental image anyway. Naturally I can't really speak for the rest.) But maybe best if Mum chooses the couch. And no more long treks around rose gardens. In the heat.
- January 01, 2010

Mmm, so beautifully warm, Kay - thanks for reminding me what it's like - and I didn't know that about roses and cabbages either!

Pumpkins remind me of womans bottoms...I'm not so sure dinzie you should admit to growing them!!!!

Mum can get a motorised adventure next time we need to take her for a big trek...I'm sure she would love being a menace on wheels :-)

Clare - I think Mum was confused!

dinzie - perhaps ... only you can answer that one!

McD - We'll have to work on our mother to do that.

Dinzie - Right that's it. I am closing comments! ;)

LOL I guess you two didn't WALK up the steepest street...poor Mum. Even so, her legs must be better than mine! This was lots of fun to read. Nice pics, too!

Hm. I didn't know that about roses and cabbages, either. Never thought that about pumpkins. Until now. Now, however, whenever I see a pumpkin, I'll think (well, you know what).

Joyce - I think it's great to start the year off with laughter - and my Mum has a certain gift at providing that.
(Shame that your image of a pumpkin has been so utterly altered!)

Beautiful! And I got wander at 'home' some. You did make me smile, then yearn for lupins ... specially the yellow ones that grow at the beach and smell like heaven.

Congratulations on the 28 celsius. It's after 10 in the morning here and still minus 3.

Happy new year, Kay and all the very best things in 2010.
xx

Kay,
My, my! Thanks for the cabbage, rose, breast comparison. I'd never made the connection before, but now I'll never fail to. ;)

oh the heat radiates from those photos, I'm warming my hands with it as I type. It's so cold and beautifully snowy here....

Yes, that's some steep street, Kay. When in NZ last time I walked up it and my nose seemed to be almost touching the road ahead of me!

That's funny about roses and cabbages. I used cabbage leaves to dry up after nursing--funny how the shape and curvature is a perfect fit to a woman's breast.

And the walk...well, what doesn't kill us makes us all stronger, correct? And you got a wonderful story to tell out of the deal!!

Thank you for the lovely pictures. As I sit freezing my tushie off in negative windchills today, I am warmed by the thought that summer is at least gracing one part of this Earth!

Be well, Kay. Happy New Year to you all!

But good to spend time together.
I miss lupins and foxgloves.

I agree with your mum: "That was lovely!"

Look at that sunshine - Happy New Year! Enjoy it missus.

Roses are so luscious and you have shown them well, Kay. Your mother is what we would call a trooper--and a frank one at that! Had to laugh at her social/sexual/floral analysis. Who says she's wrong? Happy New Year and congrats on the gorgeous grandson.

Di - Always great to see your comments Di - thanks. All the best for 2010 for you and yours too!

CGP - Snow's lovely! Each season has its beauty ... and it's lovely to revel in them, as you do.

Rel - Hmmm ... yes, I know what you mean, I don't think I will ever look at a rose in quite the same way myself!

Avus - Yes, it's steeper than it looks from the bottom somehow. :)

Mama Llama - Thank you! You have a great year too - you'll get your turn at summer soon - I promise!

Barbara - Maybe we are mirror images of each other season-wise!

Herhimnbryn - Yes foxgloves and lupins epitomise summer somehow ... and it was great to spend time with my Mum.

Katipo - Thanks! (Lovely it is too to hear from you!)

apprentic - I am loving your winterly reports too - it's always good to hear about the other side of the coin.

Becky - Yes you are quite right - Mum is definitely a frank trooper!
Thanks for the congrats and best wishes.