What I Didn't Know I Had Forgotten 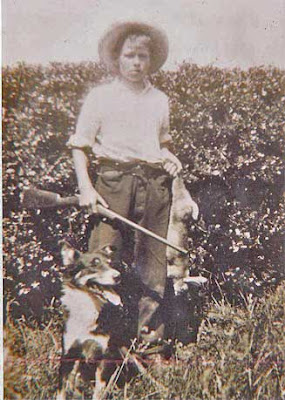 A photo from my father's album - his first rabbit? At a guess, I would say the photo was probably taken around 1935 - 36 when he was about fifteen years old.

At nine years old I graduated from writing with a Black Beauty pencil, to a fountain pen. I was the proud owner of a marbled-blue, Osmiroid fountain pen with a rubber, inner tube that constantly needed to be tanked up. Along with the hit of raw ink (pungent yet not unpleasant) I remember the fountain pen’s hand-warmed plastic, the taste of its chewed end and the ease of its nifty, lever-operated filler. Sometime in the late 1960s schools admitted defeat, allowing blue ballpoints to be used for general writing (rather than allowing just the use of red ballpoints for ruling margins) and thus fountain pens became redundant.

My father used to keep a diary, writing in small, navy-blue diaries with a thin, capped pencil tucked into the spine. My mother still has all the diaries, except for ‘1963’ which I’ve manged to get my hot little hands on. The entries tell of domestic details and hard yakka: Monday, 10th of June, 1963: ‘Carted two loads spuds sold a porker to Snow Egerton £8 fed pigs cows Fine can of milk from Milton Herrick’.

The pencilled words are smudgy, faint and uneven, almost to the point of being child-like. The word order is endearingly wonky; after reading a few entries, it dawned on me that the word ‘Fine’ interspersed at random in different entries isn’t an adjective, but a reference to the weather that day. Without my father making the effort to each night write down the day’s work done, we would have no record of it. The work is recorded in endless, pencilled, farming verbs: drafting, tailing, lambing, feeding out, clod-crushing, dagging, topping, crutching, sub-soiling, harrowed, weaned, killed, culled … again nothing spectacular, but they are one of the few records we have of his life.

For years I kept diaries too, full of the mundane. One of the entries in 1984 describes the explorations and discoveries our four-year old son was making as he negotiated the labyrinth of language and imagination: ‘Tarati’ is a regular visitor to our home. An imaginary friend whose mother lives in Queenstown. Sometimes she has green hair and a yellow dress.”

Whenever I read these entries, clear associations flood in. I play with time. I recover the past and bookmark it in order to keep its place in the present.

Writing on a laptop is not as earthy as pen and paper. It doesn’t show the sweat. No holes are rubbed in the paper. Sometimes I have a yen to write with a fountain pen again. One with an old-fashioned nib shaped like a digging tool; not unlike the chisel plough my father mentions in his diary. A pen that I need blotting paper for and an ink-well to fill ‘er up. But even if I did act on this I can’t see myself ever surrendering what has become the norm for me, writing on the laptop. Seeing the letters already formed for your fingertips to pick and choose, is more remote than forging the letters for yourself from lead and ink; in fact it feels like cheating; and compared to this clean, calculated method, manually creating the letters yourself with a pen or pencil is honest spadework. However, achieving effortless crisp and professional writing on the screen, becomes addictive.

Writing stored online, or in a computer’s hard drive, isn’t as easy to take a hold of as writing that’s kept between the pages of a book. At present I am using my old diaries as a research tool in order to re-discover something of the mood of the 1980s and ‘90s when I was deeply into parenting. The diaries, tactile and sturdy in my hand, help me to remember what I didn’t know I’d forgotten. When I read Dad’s diary, the feel of its hard-backed cover tucked in my palm, is part of the pleasure. I read it to recover a father taken away too young, too early. Part of that recovery is to see in the entries, his handwriting with all its imperfection; words scratched out, clumsy arrows to the bottom of the page where he has added something he forgot, the mis-spellings, the lack of punctuation. Such revelations would be impossible in any online written piece, historical or otherwise.

Whether I write in ink, pencil or by tapping on a keyboard, like my father there is also something in me that drives me to chronicle my life; to break twigs and leave some sort of a trail. I’ll let my father have the last word: Tuesday, 12th February, 1963:‘Weaned Goargina, Bobtail, Black Slit Ear Got mower ready for Hay went up Stan Shaws to cut Hay too many thistles cut some up top Hoggett Block Fine’.

Love this posting. 'Osmiroid fountain pen' has such an evocative ring, I wonder if that was the sort I had, too. Along with the permanent blue smudge on the first bump of the third finger...

I have memories of ink everywhere...always blotching or getting on your fingers....yuck!!!

Just this morning in The Press there was a letter to the editor which referred to the writer asking a shop assistant for a desk pad that contained blotting paper. The young girl asked "What's blotting paper?"

I write poetry by hand still, in exercise books and on scraps of paper, and then type it up on the computer, print it out and scribble corrections on it. I only write straight into the computer if it is a longer piece, like an assignment (when I was doing my business diploma), or the family history book that I am eternally not completing. Or a blog post.

I have to confess to using a ballpoint pen though - I haven't used a fountain pen for years. I remember my children at school getting their "pen licence" when their work was considered neat enough to graduate from pencil.

so inspired to keep a diary again.