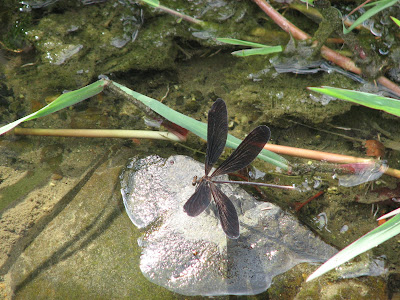 One of the things we saw in Japan was a swarm of dragonflies - something I've never seen before. Dragonflies are cool, and not just because of their name either. I think it could be their style-y flying - that capacity to stop, start, zoom; the way their chassis catch rainbow tints in sunlight. (Try and replicate that, humans!)
Going to the launch of the ‘Voyagers’ poetry anthology at Circadian Rhythm in Dunedin last week was a fitting way to smooth my way back into being back in NZ; back in Dunedin; back home. The anthology contains science fiction poems written by New Zealand poets. When I asked one poet there if he was in the anthology, he said, “I don’t write science fiction poems.”(He might be surprised!) I didn’t think I did either, but I did try to write one especially for the event, which had an open mike component.
Tim Jones (one of the two editors for the anthology - Mark Pirie being the other) did an excellent job of mc for the reading. Several poets with poems in the book read their poem (sometimes choosing other poems by other writers in the book as well) following that up with more poetry of their own. David Reiter, the book’s Australian publisher, was also there. It’s his second visit to Dunedin (and he must be a good guy, cos he likes the place.) Over the course of the night, he read some poems from the anthology as well as some of his own, and other poetry he’s published from both Australians and NZ’ers. As I am writing this report a week later, I will no doubt have forgotten some of the readers - but from what I can recall, we had readings from: Sue Wootton (who not only read her own poetry, but Katherine Liddy’s ‘Crab Nebula’ from the anthology) David Karena Holmes, Jenny Powell, Cy Mathews, Larry Matthews, David Eggleton, James Dignan, Ian Goldsmith; plus others ... (and apologies to the ‘others’ whose names I don’t recall.)
The excellent ‘Voyagers’ anthology is available to buy. (Please go here to Tim’s blog 'Books in the Trees' to find out where, and also for farther ‘Voyagers’ news.)
My poem kind of wrote itself after sitting in my head gathering steam for about three days. I knew it was going to feature an escalator in Japan, because it was while riding one there that I got a weird feeling of being on the Blade Runner film set. (What did it was the fact that the escalator started speaking in a semi-monotone, telling us to ride it safely, and to keep our hands on the rail etc. ... ) Steve said he seemed to recall from his Film and Media papers at Otago Uni. being told that part of the mood of that film was modelled on modern Japan, and in the film some of the background speech is a kind of Pidgin Japanese. The poem revealed that voyages disrupt and unsettle - maybe it’s a theme of mine at the moment - but are necessary for change, awakenings and re-establishment of place.
The whole process of writing this poem coincided with an interesting piece of prose I came across at the time. Written by the American poet Linda Gregg, it’s about how poetry is ‘found’ (the essay is called ‘The Art of Finding’, and if you are into writing poetry it’s definitely worth looking at - go here.)
Lately my life seems to consist of highways and byways (and runways ...) including on the internet where I am led by links to interesting sites and then from there to others. So much so, I become disoriented, ‘caught up’, forgetting where I started from (and afraid that it might be a metaphor for my life right now.) Where the heck this is all going to lead me, this interest in science fiction that ‘Voyagers’ has fuelled (and it has to be said, Twitter also has a lot to answer for as well) and the itchy feet syndrome I am experiencing at present, I have no idea - but I am looking forward to the trip. I think.
between sons
With our first-born son
caught up in Kyoto
a flowing elevator
pours us through to another level,
tells us to travel safe
in a voice like light

from a blue sun
in one of the Jack Vance books
in the boot of John and Katherine’s car,
there as excess baggage
because even sci. fi. books
cannot alter their weight at an airport,

how he is he replies okay
but still in Dunedin.
Meanwhile, back in Japan
we’re asked to please
remove our shoes
in order

to toe our unshod way
along ancient wood
on feet no longer planted
but wavering,
like the floating feet
of astronauts.

What a coincidence, I just found that Linda Gregg article a couple of days ago.

We lived in the south of Japan, in a semi-rural area surrounded by paddy-fields. Some dragon-flies, and in summer the sound of insects - cicadas I presume - was incredibly loud on the hot, humid nights.

I liked the poem when I heard it at the Voyagers reading, thanks for putting it up here.

I very much enjoyed this poem when I heard it on the night - thank you very much for posting it here so I can enjoy it again! And thanks for your report as well. Other readers on the night included James Dignan, who read his Voyagers poem "Great Minds" and a couple of others, and Ian Goldsmith, who came out from behind the camera to read a poem he'd written while filming the event!

Tim - Thanks very much, I have added the names.

oh i LOVE your poem - the imagery in it is fantastic.

i specially love the lines

even sci. fi. books
cannot alter their weight at an airport

and about your son arriving before he left. the joys of travel! seems like you had a really great time

Hello - great dragonfly pic, and love all your Japan pics too!! Thanks :-)

oh, oh kay! what i treat to stop by to find not only your unsettled and hopeful transition, but this poem! i love how you wrote this. that line about sci fi books not able to alter their weight at airports is just super.

I have never been to a poetry reading, I am very sorry to say. You make me want to go. Your poem is beautiful.