the crow / the grey warbler / one whole week 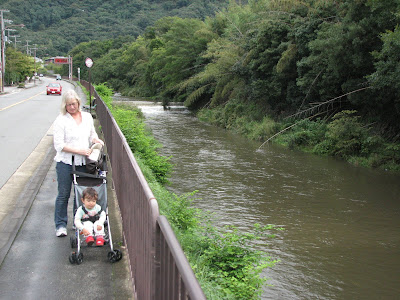 This is Steve's hood and where we waited for the bus to go into the city of Kyoto and beyond! 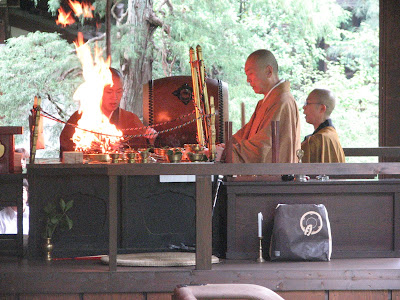 Our wonderful guide for the day we went to see another impressive temple in Kyoto, was Kaori, who read a poem at Steve and Eriko's wedding. She showed us a Shoren-in temple that in the end has to be my favourite (I kept being asked; What is your favourite temple? ) Well ... this one was. Definitely. It seemed a quieter temple than the others we've seen, with its aged wooden walls, homely, peaceful atmosphere and harmony oozing from every grain. 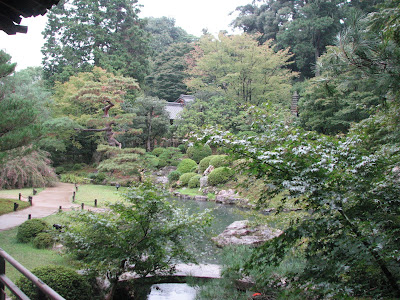 It brought the outdoors into the inside. It housed colourful, decorative screens. And the fact that in one room, over fifty ancient poets' portraits were featured, won it over for me. 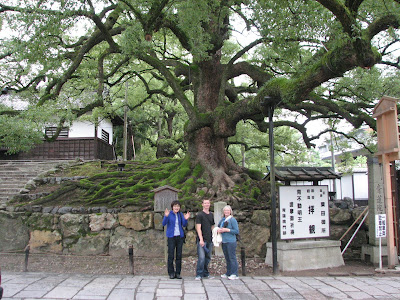 At the entrance it has a tree that dates back to the twelfth century which I could've spent all day gazing and wondering at. A great old fellow that Steve bowed to on our way out which seemed a fitting tribute to such an aged one. 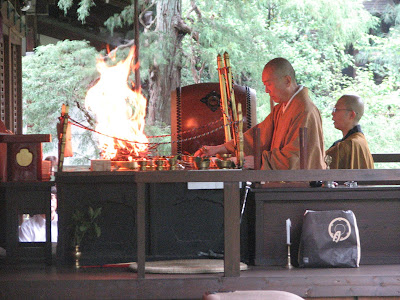 And we happened to be there for a Bhuddist ceremony .... that involved fire. Awesome. 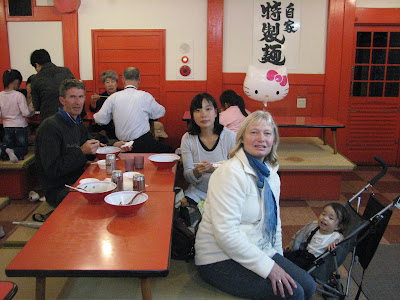 That night E wanted to show us her 'home town' - Osaka - so we caught the train and had a look-see at her city, starting with a noodle curry meal at kinryu noodle house. 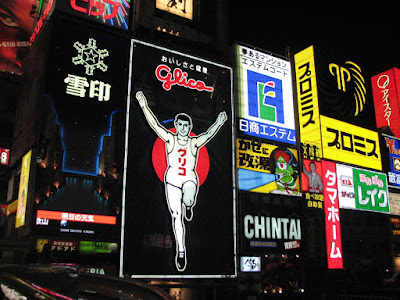 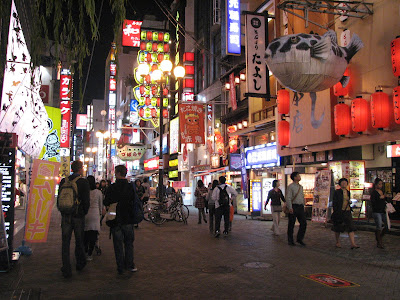 Osaka is very different to Kyoto. Exciting, vibrant and edgy, it contrasts with Kyoto which guards its history and traditional edge. In Kyoto, no building is allowed to be over a certain height - so the hills that ring the city are always visible and the sky apparent. Osaka is different, but nonetheless has its own strong character. We really enjoyed our brief look-see at its life and energy, bright lights and attitude. (For example in Kyoto, people make way for others, in Osaka you're more likely to be bumped out of the way on a busy intersection.) Steve says most of the Japanese comedians come from Osaka. Interesting ... I think that shows that it kowtows to no-one. It also has its own dialect and terms of speech. I guess if one was looking for an equivalent, it might be London and the Cockneys, or maybe NY? 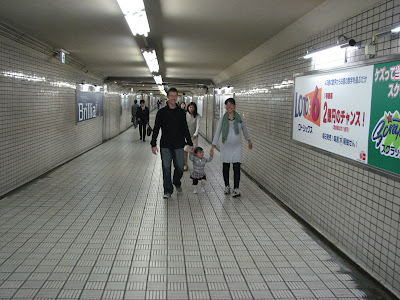 The family in the subway, heading back from Osaka. 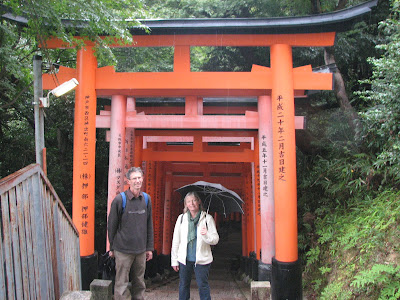 The day before we had James as our guide. James is from Amberley, North Canterbury, but now a long-term resident of Japan. He is a lovely guy and the perfect guide with that low-key kiwi humour to add laughter to an enjoyable walk through the very long fushimi shrine's torii tunnel ( we only got to the halfway point, and that took half an hour).

Near where James lives is tofukuji temple with a stone garden as well as a moss garden. 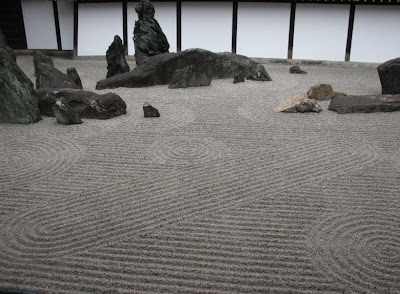 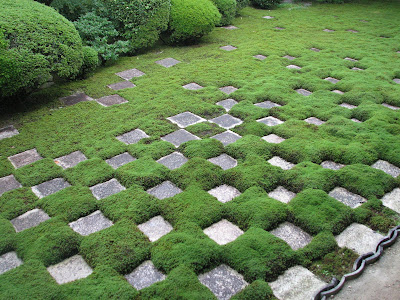 The first bird I heard in Japan was the crow, the first bird upon arriving back home (nearly a whole week ago now) was the falling-scale sound of our local, little grey warbler. Between them, one whole world.
It has taken me a long time (I’m not there yet, but neither am I rushing it) to stop missing Japan. Having our son and his wife and daughter (and another little baby on the way) of course adds to the feeling of being torn away too soon.
Japan has left a mighty impression on us, for reasons too many to outline here. In fact the frustration of having to pin it all down with clumsy words, has put me off writing this post. Then I decided that all I could do really was a small detail - as in a corner of the whole canvas. (Mike sometimes does this for his Cartoon Moon flickr page - details from the whole canvas. It’s effective too, as I hope are my few reports on what was for me personally an epic voyage.)
Here are just a few memories, filed under 5 memories for each sense:
Sounds: Crows; people calling, "arigato gozimas" - from cheerful shop assistants to bored bus drivers (and everyone in between), cheeping bird-sound over the subway sound systems, chanting monks walking past S&E’s home one morning, the sound of straw brooms sweeping paths.
Sights: dark-suited salary men on trains, paper lanterns, people riding bikes (bikes of all shapes, sizes, models, colours ...) with one hand on the handlebar and the other holding an umbrella, packed-in-tight shoe-box houses, cheesy billboards.
Tastes: Tofu, salted beans, fried chicken gristle, raw tuna, fried stingray fin ... so much variety in the food, so much choice - so sugar-free.
Smells: Incense, cooking from narrow, cobbled alley-ways, tatami mats, ancient wood, warm rice fields.
Touch: Warm toilet seats! ridged bamboo trunks, the bark of a tree dating back to the twelfth century, tatami mats under your feet, the peculiar comfort of a springless futon.
And so much more. Sensory overload!
Steve (who has experienced a few of these switch-from-Japan-to-NZ and vice versa now) suggests my sense of displacement since arriving back home is due to 'the sudden sensory shift. Sometimes takes a while to adjust.' He suggests, ' a bracing walk along St. Kilda beach into a stiff southerly should do it!' He's probably right, but I can't quite make myself take that walk. Not just yet.
Japan and its sensory overloads will continue to remain with us. We will be going back. There are just too many things now on our ‘Next Time’ list for us not to (including, of course, the new grandchild, due soon.)
- October 16, 2009

sounds all so wonderful...dont give up the feeling of missing...just yet.....it makes you see nz differently as well...the good and the bad....

Oh I'm sooooo jealous, I've seen those gardens on TV, but oh to see them for real.

I'm glad you have a good reason to go back soon! Yoshi's mother has finally (after 15 or so years) to come to Salt Lake next summer! We are anxious for her visit.

Did you eat raw tuna? It's really really good (if you don't think about what you're eating)--soft and buttery, no fishy taste at all.That fried chicken gristle--and skin--tastes pretty good, but is a heart attack waiting just around the next corner.

My middle son Chris has a black belt in Shoren-Ru Karate. And my
son Lee mentioned all huge numbers of crows in the woods outside Osaka and Kobe.

I am so enjoying your words and pictures! Thanks for sharing!

It sounds like a wonderful trip!! It's hard to feel like you're capturing the experience, but we appreciate it!

What a wonderful line: "The first bird I heard in Japan was the crow, the first bird upon arriving back home (nearly a whole week ago now) was the falling-scale sound of our local, little grey warbler. Between them, one whole world."

Now, if that isn't begging to go in a poem, I don't know what is.

I love the precision of the gardens, the gravel and the grass...

So much to comment on, I don't know where to start. So I will just congratulate you on the new grandchild. (Oh, and I don't think we have grey warblers in Christchurch. To the best of my knowledge, I've never seen one - or I may have seen one and not known what it was)

THis is a great posting.
I have a friend whose son lives in Japan so I shall tell her to have a peep ( or rather, a long look)
Thankyou Kay

Beautiful pictures--and warm toilet seats, wow! I didn't realize a new grandchild was on the way, that is so exciting! I don't blame you for missing Japan; why does it have to be so far away? Love the birdsong framework of the voyage.

What a fascinating and generous account of your travels in a country that seems increasingly enticing as a destination. Thanks, Kay!

Japan has a knack of getting under your skin and into your heart and refusing to let go! Seeing photos of Osaka made me feel natsukashii (nostaligic). Although I don't miss the crowds and dirt (Tokyo is of course much more crowded but I live out in the suburbs of Chiba). But having been here so long now, I forget just how alien Japan can seem to the first time visitor.

sounds like you had a wonderful time. There are some gorgeous photos here, specially those of the stone gardens....

I love your comment about the world's distance between the crow and the first bird you heard on getting back home...