Another catch~up after a relatively packed few days when we visited Hiroshima on our own and then on to Okayama prefecture to visit with S's in~laws (two of the sweetest people imaginable.) We are at the tail~end of our amazing trip to Japan to catch up with our son in Kyoto, a fact that leaves us with some sadness. Our wonder at Japan, its customs and sights, continues ~ in fact, gathers momentum as we wander ... 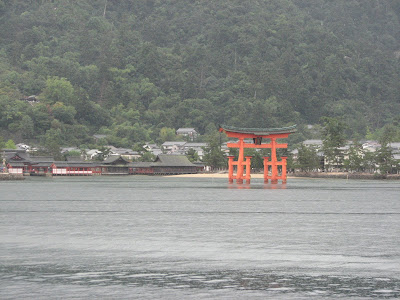 Miyajima Island near Hiroshima is reached via a short ferry trip. We visited in the rain and despite the discomfort of less than adequate footwear (squelchy sneakers and sopping socks) only added to the moody atmosphere of hills, trees, beach and deer ~ not unlike Halfmoon Bay in Stewart Island, NZ ~ if you added to Halfmoon Bay, ancient history, a shrine or two and some un~hunted deer wandering the shopping lanes! as if out for a spot of shopping and a bit of a chat over coffee. That was a wander in the rain on Friday under umbrellas our jeans wet to the knees. 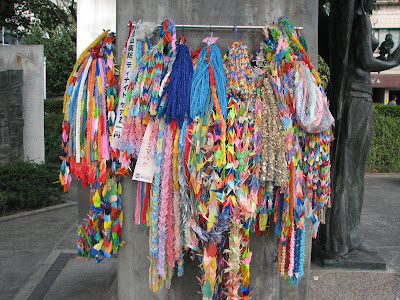 This was the day before, when we visited the Peace Park at Hiroshima. This photo shows thousands of tiny, paper, origami cranes people add to the various monuments as a pledge for peace in the world and the halting of nuclear armament. Hiroshima, the site of an A~bomb attack, is an affecting place with its focus on world peace and graphic, historical evidence of the devastating effects of nuclear war. 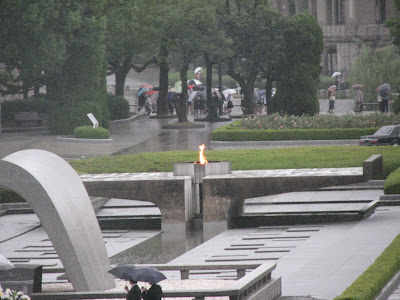 We spent a deeply moving time visiting the Museum there, receiving a glimpse of the devastation and horror caused when ordinary citizens going about their daily lives on a summer morning, are suddenly hit with an atomic bomb. (We are also both reading the novel 'Black Rain', which is an effective and enlightening account of that day in August, 1945.)
Despite the bad taste left in your mouth, there is a pervading sense of a non-judgmental hope for world peace, and the brave ability of humankind to rally and recover from such a cataclysmic event.
Both nights we were there, we ate a traditional meal (we are in love with Japanese food!) and on both occasions (both in sharp contrast to each other in their approach and production ~ I might have time to describe these meals in detail at a later date) experienced the warm hospitality and overwhelming kindness and generosity of Japanese people to two receptive, even if at times slightly confused, kiwis. 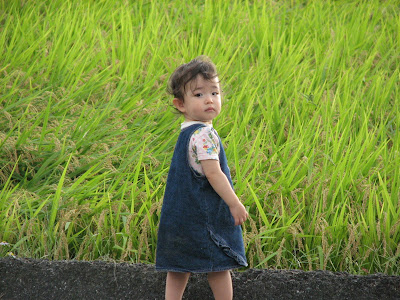 From there we travelled to the countryside in Okayama Prefecture, to re~unite with S & family at the in~laws. 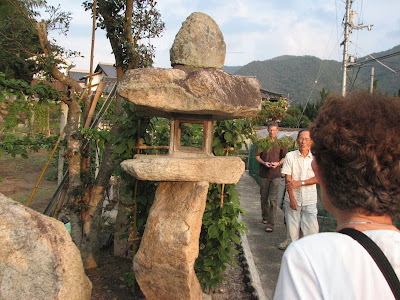 G is a gardener of some expertise. After retiring, he and N have gone back to G's family land. Note the stone lantern. 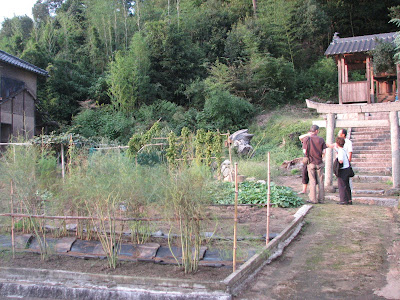 Just visible in the upper left corner is the old family home, now falling into disrepair (after all it's over a hundred years old now.) G uses the roof tiles for garden borders. 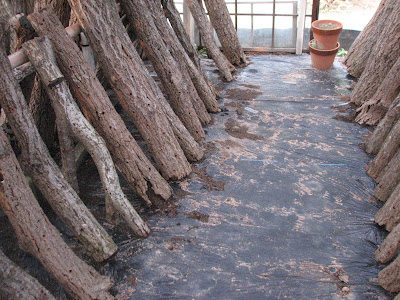 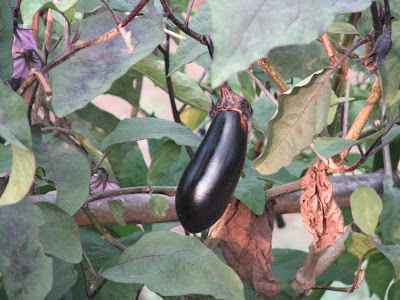 The garden is totally organic. No pesticides were used in the production of this eggplant. 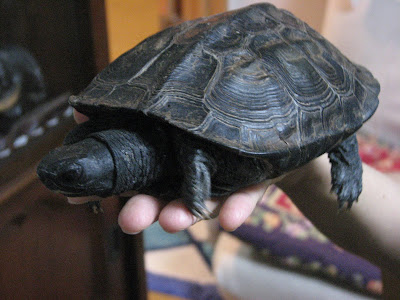 E's pet turtle, now over twenty years old and looked after by her parents. Some parents are left with the cat ... or the dog ... in this case, it's the turtle ~ Okame (which means Mr Turtle in Japanese.) He has free reign of the house and wanders about inside ~ you have to make sure you aren't stepping on him! One of my lasting memories of this trip will have to be waking up to the 'clunk, clunk' sound (identical to a woman in high heels) of Okame's shell on the wooden kitchen floor as he makes his slow and deliberate early morning perambulations. 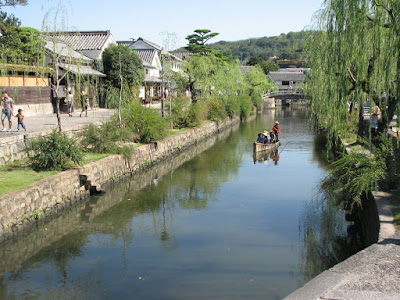 As well, we visited Christchurch's sister city Kurashiki, which like the Canterbury city, also has a river and willows; but of course a lot more ancient history. The river, willows and bridge are very 'willow~pattern plate'.
I was a little tearful leaving G and N as they are special people to me; we leave S&E&A in their care really so they stand in for us in a lot of ways in the parenting an grand-parenting roles.
I can't leave my report of the visit without mentioning the overwhelming hospitality and meals we had while there. The breakfasts were amazing ~ toast and tea do not come anywhere near to comparing. There was not only the usual (for me) toast and tea, but meat, bread rolls, cakes, boiled eggs, grapes, kiwi fruit (home~grown) tomatoes, beans, peppers, egg rolls with tuna and salmon ... I can't begin to name all that was on the table ... Wow!! Dinner the first night was sushi (hand~rolled yourself) with an array of ingredients to add to the seaweed roll, and sukiyaki the second night with another impressive to the point of overwhelming assortment of ingredients to pluck out from a central pot. Both are extremely friendly and pleasantly lingering ways to eat. We were certainly being thoroughly spoilt. 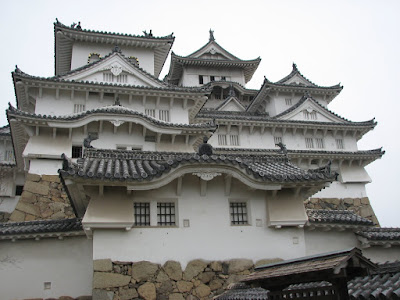 Before returning to Kyoto, R and I took a little side~trip to reunite with M who stayed with us after S&E's NZ wedding in January this year. She showed us around the castle in her hometown ~ Himeji. She had a friend with her who was fluent in English and who knew a great deal about the castle and its history, so we felt very privileged to once again have our own personal guide. The castle is an impressive piece of architecture dating back to the 17th century (altho' originally built in 12th century and some of the writings and illustrations, weaponry and other historical remnants on show inside date back to that time.) 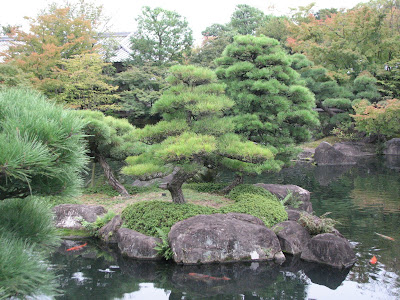 The day was finished off with a wander around a Japanese garden ~ very peaceful and reflective.
And then it as a train trip back to Kyoto. Only three days left now!
- October 06, 2009

And a mushroom house - I just knew we should do that in Stokes valley :O)

What a feast of wonderful images. And hasn't your lovely granddaughter grown quickly?

Gorgeous pics. I love the bit about the turtle's noises. I bet you have a notebook full of observations and writings. It really sounds like you've had a brilliant time away.

I am enjoying this (and much appreciate being alerted to it on twitter so I am less likely to miss any) and finding it so interesting. You have such a fresh look at everything and you tell it so well. Great stuff, Kay. I especially loved the detail about the turtle too!

how can you go past that turtle....that is just story worthy :-)

I have loved living Japan through your snippets...and I am sure there is more to come :-)

I feel very lucky to have seen these shots from you, Kay, and I have been telling my friends about them. I can only wait to hear what you make of them poetically.

Oh this is all so lovely. You'll have so many images and experience to compost now Kay!

That photograph of your granddaughter is just BEAUTIFUL. The whole post is a feast for the eyes and imagination.

Thanks everyone for your kind comments. I will get back to replying individually to comments when life settles a bit ... it's already starting to do those slow-down wobbles such as a spinning top when near the end of its spin - I am beginning to pick out the coloured stripes from the whirring blur - so not long, and all will be still again!