Shepherd's Teeth and a Retired Watering Can (Part Two)

As well as our son's art, we were also able to go and see Claire Beynon's exhibition 'Questions of Balance' in a gallery called Arthouse, situated literally just around the corner from Chirstchurch Art Gallery. What a pleasure that was! Claire's work is always amazing. I appreciated the balance and peace, the symmetries and depths. After the long trip up from Dunedin, it was nice to bask in the quiet strength of her art and sculpture. Go see her work if you are in Christchurch - and be amazed.

After the heavy rain that had fallen for about 24 hours finally subsided, we ventured forth on another short outing. To Eastbourne. The water in the harbour was a muddy, grey-brown from flooded river-water flowing into it. 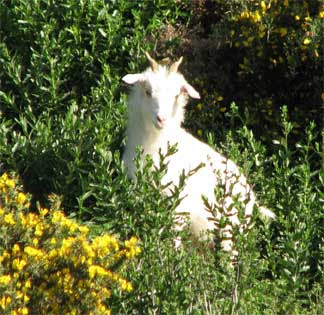 Wild goats looked down at us from banks covered in bright-yellow scrub. 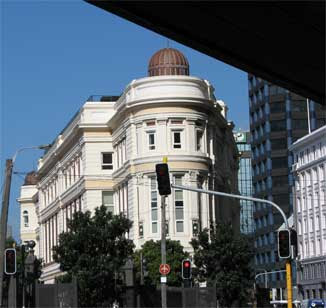 The next day I caught the same commuter train as my sister who went to work, while I spent the day 'being a tourist'. 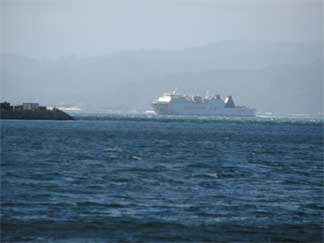 The ferries that ply Cook Strait between the South and North Island of New Zealand, often seem to float between sky and sea. When we lived here in Wellington, our sons were small and used to call them the 'wicked fairies.' 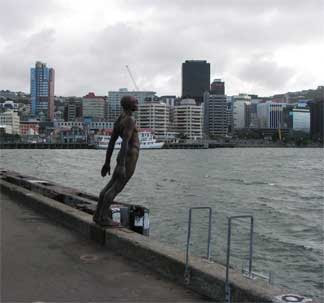 The Cultural Capital of New Zealand is Wellington's tag. It is an extremely fitting one with the National Museum, Te Papa housed here. I spent a happy hour wandering there. I saw the giant Squid and some fantastic art. I enjoyed the 'Our Place' display, but failed to find where Dinzie has his photos. Outside on the waterfront, I saw sculptures ... 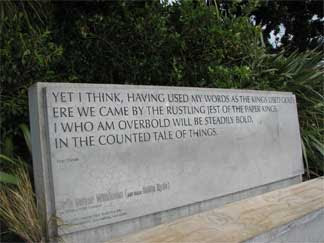 .. the words of writers hewn into stone (this is a quote from the writer Robin Hyde) ... among other evidence all around of a city alive with art, writing and on-going, permanent cultural events being advertised and promoted. The atmosphere of the city appears to contain a cultural undertow.
I enjoyed meeting up with Tim Jones and catching up on some writerly goss. over a cup of coffee. I also saw my brother again and had lunch with him. (My whole day was interspersed with cups of coffee and sandwiches - I particularly recommend Arabica's tasty egg & curry sandwiches and long, black coffees.)
As well as the cultural capital of NZ, Wellingon is also our actual capital, and as such it hums with commerce and all its sundry 'busy-ness'. I was amused that every cafe I visited during my two days in the CBD (and believe me I visited a lot!) there was some sort of staff meeting or business meeting going on at all the other tables! (SideNote: Yesterday, back home here in Dunedin, I went into a cafe - okay, it was a very downmarket one in the suburbs attached to a supermarket, but all the same ... I didn't expect to be asked, "Do you know what that is?" after I'd asked for a short black! Obviously the person serving had previously had customers aghast at the small cup they were given ... but there must be a better way of dealing with that other than presuming all customers are as ignorant! And the only business meeting going on at another table, was a middle-aged woman bitching - I'm sorry but there is no other word for it - about her manager. Vive la difference!) 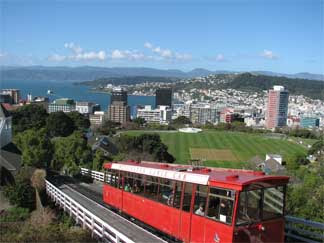 The next day I met with my friend R for (another) cup of coffee! We were best friends at Gore High School so we've been friends now for forty years. So nice to catch up ... but alas too brief. Next time we will make it a longer catch up.
Then J'n'D (aka McD and Dinzie) and I went to the Skyline restaurant for lunch. 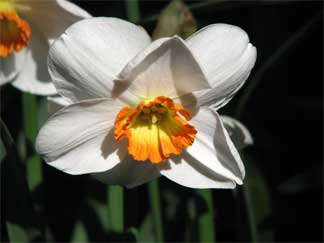 After which we spent quite some time taking photos of spring flowers in the Botanical Gardens. How could we resist? 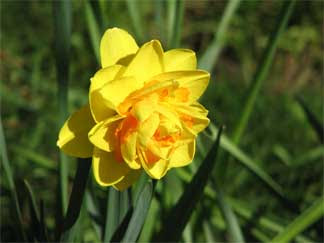 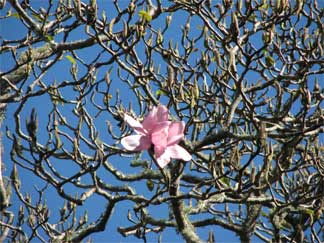 I'd call this lone magnolia flower the 'early bloomer' wouldn't you? 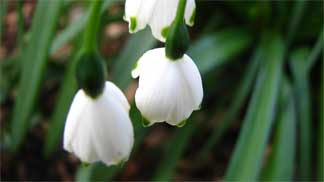 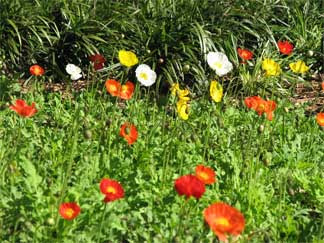 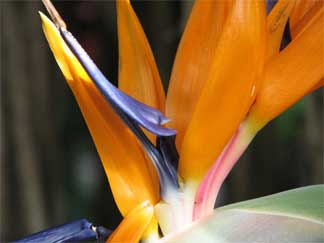 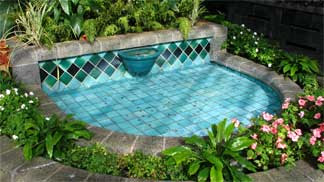 And if wishes in wishing wells came true, I would still be there! But alas I needed to be at work the next day ... so it was back to Dunedin that night. A cold Dunedin too with its back to a cold snap passing through. Brrr.
(Since then though it has redeemed itself with some beautiful, sunny, still spring days. Today we were one of the National Highs, according to the Weather Forecast's temperature reports!)
Here is a poem from my book, 'Feeding the Dogs,' which I wrote about Wellington (my 2nd-most favourite city in the world.)

Lambton Quay wanders
off up the back
into the skeleton shadows

and outlines of old gullies
with cobbled arcades
and steps

super-imposed. Tucked
away up one alleyway
is a cable car, pending.

with gondolas and contraptions.
Wellington sees its harbour
as an extension

of itself - there's where
the wicked ferries ply. Dave says,
'No matter what time of the day,

but not to excess.
The shop assistants
and hotel staff are efficient

and polite, but a little distant,
as if thinking about weekend
wind-surfing or doing up a villa.

Oh, how you make me want to visit Wellington!!! Wowser! I think my favorite of all the gorgeous photos is the one of the wild goat. It almost looks like a unicorn. Beautiful!

okay, your photos have made me officially homesick now!

really love your poem, i would say all of that is true

A friend's son is just off to Wellington to study volcanoes for 3 yrs. He was there for a yr previuosly and is very keen to return.

Tim - Thanks for that _ I thought long and hard about that line ctually! So glad you like it.

Jan - It's a great place. Lucky him. Altho Welly is more known for earthquakes than vocanoes. (That's more Auckland's forte! ... ) :)

Great place, Wellington - we loved it.
We also enjoyed the Skyline restaurant, the fast run back down the Luge and trying to jump off the return chair lift at just the right moment!