Shepherd's Teeth and A Retired Watering Can

The Exhibition Opening at Christchurch Art gallery was a buzz of excitement as new work from the artists were unveiled. The exhibition, called Cloud 9, features work by nine, young New Zealand artists. If you are in the city of Christchurch over the next three months, do go and see the paintings. Our son Mike's two are titled: 'The New Aloof Shepherd's Teeth (Blue)' and 'The New Aloof Shepherd's Teeth (Red)'.
And weren't we the proud, beaming parents! (Albeit attempting to dim the beam as much as possible in order not to seem too obvious and gauche.)
We stayed with Robert's sister and family in their recently-purchased, exceedingly interesting 100 year-old home. Along with the house and its Upstairs and Downstairs history of servants' quarters, they inherited a fiesty cat and a friendly ghost.
After the exhibition opening was over, Robert and I, along with my sister L, visited a couple of places for a wine or two. L and I found the Chard's Farm chardonnay especially to our taste and Robert (being Queenstown-born and raised) was able to give us some local history of the vineyard; how in the 50s and 60s the Chards, the original owners of the sheep farm sold to grape growers, would have to row across the river in order to go into town or attend church.
We noticed how quiet Christchurch was compared to other Friday nights when we've visited in the past. There were also places that have closed down. Both clear signs of the recession.

***
Then early on Saturday morning I boarded a rather small jet to fly to Wellington where I caught up with my mother and spent a relaxing few days with my sister and her partner. Lots of laughs, good food and wine. And a couple of outings. 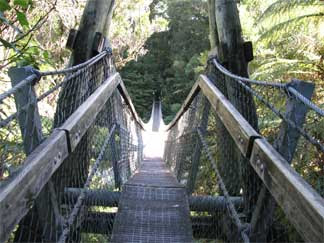 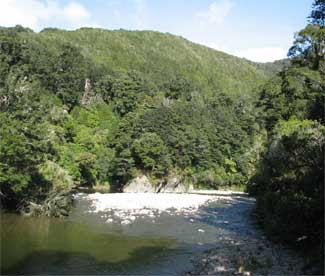 One of the rivers the horses crossed in the 'Lord of the Rings' film.

***
J'n'D had a good crop of vegetables last year and are increasing their produce-hopes even farther this year with some more raised beds for tomatoes, onions, garlic, potatoes, strawberries; and much more. 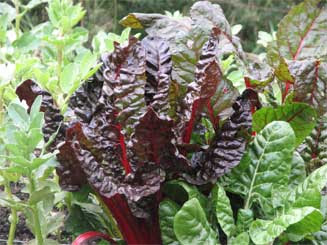 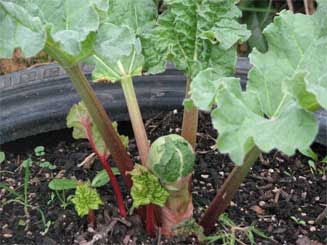 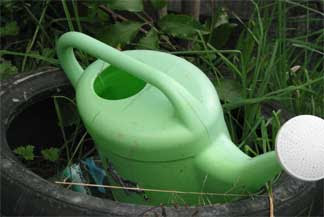 A retired watering can? No doubt waiting for re-service. 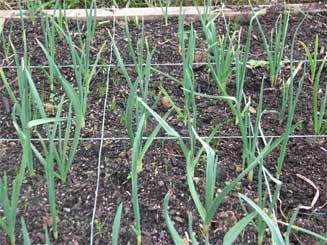 ***
Each day a bevy of sparrows, chaffinches, waxeyes, yellow hammers and other seed-munchers would descend upon seed thrown out for them. A rather portly, corn-seed hogging pigeon called Trentham (named after the Hutt Valley suburb we think it may hail from) would also make an occasional appearance.
J'n'D's home is surrounded by native bush and gigantic pungas (for overseas readers, these are large ferns that grow to tree-height) which these birds (including tui and bellbirds) emerge from when a pile of seed is scattered for them. J and D have two cats, but they aren't too bothered and never try to catch the birds. (We also have two cats, but there is no way they would lie in the sun and idly watch birds feeding ... maybe we breed a more meat-hungry variety down south.) 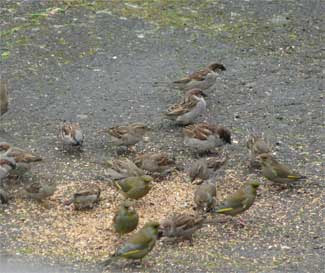 Good to catch up with you and your news!

Those sparrows and finches are looking rather portly as well ;O)

The watering cane gets a weekly outing to water seaweed 'tea' over the borders :O)

and very lovely to catch up with you as well....lots of fun and laughter.....need to do it more often me thinks!