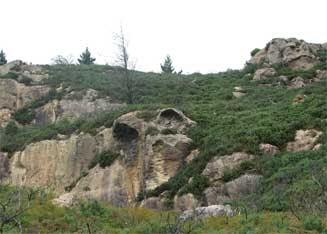 Last time Robert and I went for a bit of a jaunt with picnic basket and suitcases, we came home via Bucklands Crossing where we stopped to have a picnic lunch. We were in the middle of nowhere, positioned with some lonely crickets under a wide, grey sky.
I used binoculars to try and see if I could spot anything of interest apart from weeds and rocks. Outlined by fat willows, a slightly stodgy river flowed somewhere below us where I could pick out the ruins of a bridge's stone piles.
Somewhere over a hill-top pale with dead broom, some hunters were shooting at something, the shots echoing from steep rocks all around us. When they left in their four-wheel drive by way of a side road, stopping to open a gate, I tried to see what they had in the clattering trailer they were towing, using the binoculars to sneak a peek. The tray was empty.
Once they left, it was silent again and we could hear the magpies. I lay back on the grass, looking up at the blank sky, listening to creaking crickets and the occasional bee zooming past. Far above I could see jet trails. People leaving by way of the sky. Then we left too, by way of a gravel road winding through rock. Behind us, the countryside keeping no mark of us ever having been there.

If I remain still enough
the country will play for me
the glottle-stop of magpies,
show me

the clucking river
where full-figured willows
mother the stone piles
of an old bridge.

and wind their watches.
A breeze peppers a plain,
grey sea of cloud.
The hunters leave,

stop to open a gate,
all around,
sedimentary rock
smeared with lichen’s pastel green.

(This poem was this week's Monday's Poem in the Otago Daily Times.) 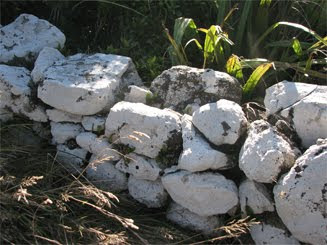 This outing turned into a wonderful poem! Are you packing yet?

how i love to read your essay narrative and then see the poem that came from it!!

how are you, chief? i think of you regularly. xo

Lovely poem. Are you having the same warm spring weather that we are enjoying in Christchurch?

You're just going to have to keep going on picnics if wonderful poems keep resulting from them. Beautiful.

Joyce - Not packing quite yet but making little piles ready to put into my suitcase - and making lists!

kj - I am fine but a little bit too focused on a faraway country called Japan and our imminent trip there!

Catherine - Too right we are and loving it!

I like the jets and bee line very much. :)
I learned this week that "bee line" is based on how bees form up to follow the quueen to their new hive quarters after swarming.

It looks like a really interesting rock formation, with really organic shapes.

Now that's a great poem - love the magpie sounds in it too. The crack-ack-ack they make is mad, wonder if yours sounds likes ours now..?