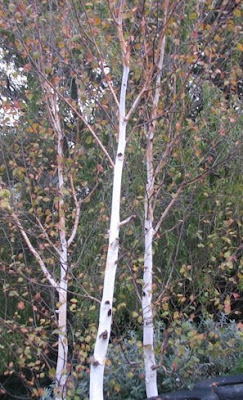 I was woken this morning by the phone. It startled me from a deep sleep. It was my boss asking me did I realise that I was starting at 8.30 this morning and that it was now 8.45? I didn't realise how reliant I was on R (who was away last night and today) to wake me up (he's far better than I am at this going to sleep and getting up at a reasonable hour business, and I tend to just follow in his very reliable wake - excuse pun.)
In my panicked state I tried to do all the preparation for work in fifteen minutes that it normally takes me an hour to do, and realised as I did so that I hadn't experienced such a soup of disorientation and embarrassment since probably high school - though come to think of it, Mum wouldn't have let me sleep in and arrive at school late. So maybe it's more a memory of me starting out on my independent life, and failing at times, as a tertiary student. Oh well, I guess it gave me a taste again of being young and disorganised, forgetful and irresponsible, which is a change from what is now the staid, habitual routine of the disciplined, responsible organised life of a middle-aged woman. 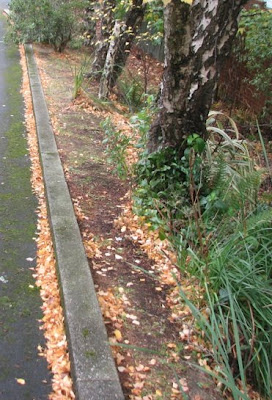 Lately I have been writing a lot of poetry and short stories, which is making me feel like a real writer (something that has eluded me somewhat these past couple of years) even if slightly foggy and 'out of it' (hence I guess the sleeping in.) The writing act feels fresh and exciting again. ('Blackbird has spoken'.) 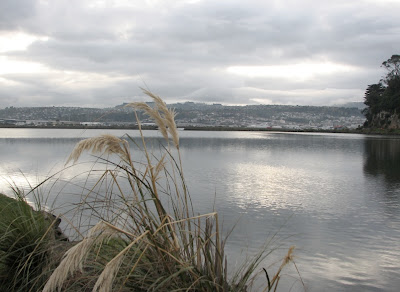 When I got home from work I went for a walk. The early evening stillness had settled under a grey-sky calm. Very Dunedin. Very beautiful. 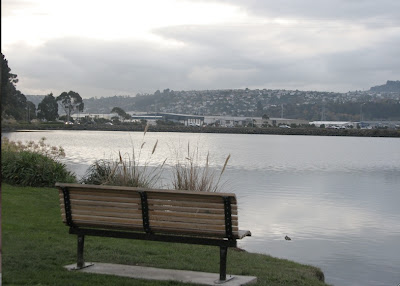 I know that feeling - sometimes it happens here, and it's no joke trying to pile the six of them out the door and still have some semblance of normality!

I love that you're really writing lately, have you been trying your short stories anywhere yet?

it's amazing how quickly you can get ready when you really have to isn't it? half-awake at full speed in a quarter of an hour! impressive.

You sure live in the midst of beauty. Wow. No wonder you're an engaging writer--inspiration all around you!

As for being late, you know what they say. Shit happens.

Hi Kay - thank you for bringing Clare Dudman's two books to Huberta's launch last night. They'll be a slow, satisfying chew (books are like toffees - or perhaps, gobstoppers - for me at the moment; my pace of reading deliberately slow and unhurried).

I visited your Navy Blue Bi-planes blog a couple of days ago, by the way - and loved it. I forget you have five 'planes' out there! L, C

Barbara - Boy do you have much more of an excuse than me, you Super Woman you!

Hey there from Mountain to the Sea.

Becky - I must appreciate it more!

Claire - My pleasure - thanks for visiting my sidestreams!
Huberta's book launch was very moving ... I must blog about it - maybe tomorrow!

Ouch, that's my nightmare. Fortunately I start work at the same time every day, 6 days a week, so my body clock has pretty much been hardwired to wake up on time.

ok thats really funny about you sleeping in....its not so much you did as to how you got woken up....you should have said you were sick as a parrot at that point!!!!