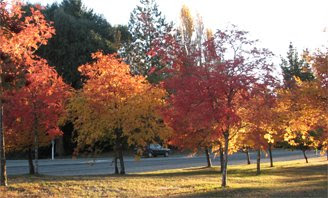 We spent six weeks in February and March learning a little Japanese for two hours every Wednesday night. This is in readiness for our trip over to Japan later on this year. It was just a smattering, but to me it felt like I was now on the inside of the door rather than standing outside 'in the dark'.
Now we have to make sure we brush up on it a little nearer the time of our departure. Already it seems I have forgotten most of what we learned.

Give each vowel
its own emphasis
and sense of importance.
Don’t forget suffixes
and prefixes.

language’s twisted skein.
The one that is beginning
to unravel in order
for my clumsy fingers
to wind it up again

into tidy hanks.
Strange words, puzzling
sentence orders, run to me,
beg to be remembered
and (quickly, quickly) gathered in.

How exciting, Kay!!! If you feel like shelling out for it, Rosetta Stone has a Japanese version. One of my students was learning it this past semester too. His motive was better understanding of Japanese anime films. I can't wait to hear about your trip.

Catching up with some reading, I drank down your lovely recent blogs. I'm trying to learn Spanish - again - on-line. Love your poem. Quickly, quickly's right - or it's gone. :)

cool poem! you hit the kugi on the atama! but, take it from someone who has been on the inside of the door for a while... it's still dark, but it helps when you have people to open some curtains for you. we're looking forward to opening up the curtains in september! btw, i've started a nu-blog. more current affair/media oriented. same address but .wordpress.com have a squizz.

Becky - Thanks for tip re Rosetta Stone & sure will let you know about our trip. :)

pen - Good luck with the Spanish.

S - Thanks! Great post on your new blog! Very funny. We laughed and laughed. Had heard on the news about the outbreak and all the closures - was wondering re your perspective and now I know! (Shoulda guessed!) :)

I spent three years learning Japanese extramurally from Massey University and never learned the word for potty!
Sadly I've forgotten most of my Japanese now without much opportunity ever to use it.

It's a treat to be on the receiving end of your new poems, Kay - you do as you say and 'give each vowel its own emphasis and sense of importance... ' Lovely, this one and the one before (and before!) C

So clever!
I am very excited for you to go to Japan, it will be good to visit your son and his family, and what a fantastic chance to get to see such a beautiful place!
Japan is on my list, but not for another 2 years, I think.

Italy and the Taj Mahal next.

Keep practicing that language, you will be so glad that you did!
;o)

I admire you taking on such a big challenge -it sounds like me trying to learn the piano in middle age!

The BEEB did a series on Japanese over here and according to it the Japanese for a bald male's comb over is "bar code bald" which I thought was brilliant!

Catherine - I was so amused when S &E told us what the word for potty was ... of course it's topical for them at the moment.

Claire - Thanks so much. I am really enjoying being in the middle of it all at the moment rather than outside looking in, as has been the case for a while now.

Scarlett - Good luck with your travels - I'll enjoy hearing about them.

Apprentice - That is brilliant! Love it!