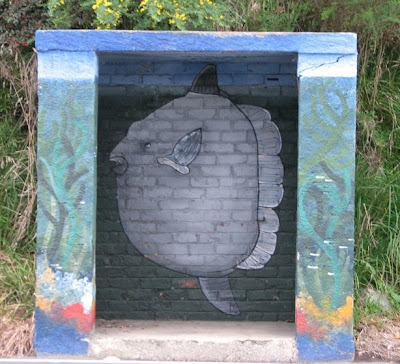 Dunedin's painted bus shelters catch the eye and are much photographed. These are two that I passed today on a walk along the harbour at Vauxhall. Most of the shelters were painted by John Noakes. (This link's sidebar takes you to more of his bus-shelter art. Sadly he died in 2006, aged 67 years old.) It's a wonderful thing that his art lives on for a bit longer on many bus-shelters, and that his original idea to paint the shelters is now being upheld as a tradition. I don't know if these shelters I saw today are of John Noakes' design, because of course as the original murals become faded they are re-touched/re-done. But I trust the original spirit that the shelters were painted in is being kept in mind by the artists. 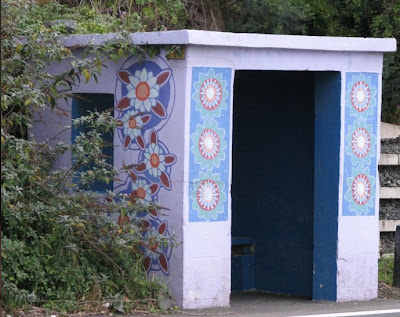 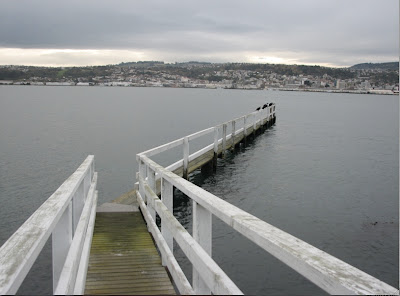 You used to be able to walk right out along this little pier, but I noticed today that it had one side missing and I didn't trust myself to walk safely all the way to the end. Besides, at the end of the rail there were was a hangout (which is the official collective noun, I looked it up!) of shags and it would have been very rude of me to disturb them. 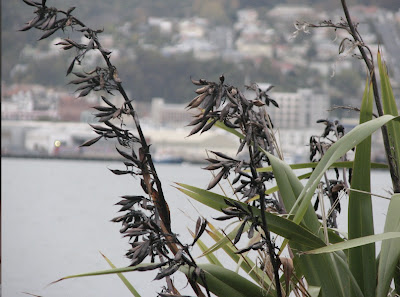 I'm sad to hear that John Noakes has died. When I lived in Dunedin, I spent quite a bit of time on the Peninsula. Looking at the bus shelters John had painted so charmingly was one of the highlights of my Peninsula journeys.

Kay,
Oh how I enjoy reading your words. There is a lilt to your way of relating your day's observations.
You've been a much better blogger than myself of late. Perhaps I'll try sleeping in and being late for work to see if it rekindles my youthful verve. ;>)
rel

Lovely bus shelters! I like the collective noun for the shags, i didn't know that before...

Those bus stops are fantastic! I think I would start taking the bus if I could look at those while I waited. Unfortunately, my town is in the boonies. I think we are called an exurb or Boston.

Tim - Yes it is a loss but hopefully we will keep on with this unique legacy.

Rel - I dunno about being a better blogger - I've been a little slack I feel.
Thanks for your kind comments.

CGP _ Yes, I liked discovering the collective noun too!

Becky - The boonies sounds rather exotic to me! ;)