I managed to get to the annual 24-hour Regent Theatre Book Sale ... proceeds go to the on-going restoration and upkeep of the theatre. Built in 1928, it has survived any threat to be knocked down and is now in good going order again, thanks to the loving care of dedicated supporters and volunteers.
The book sale runs from lunch-time Friday through to lunch-time Saturday, with local singers and musicians providing free entertainment.
This year I was only able to pop in for the blink of an eye, but even so snaffled from the hard-backed section, Anya Seton's 'Katherine', a Margaret Forster (one of my favourite English writers,) a water-stained, Frances Hodgson Burnett's,'The Secret Garden' (with a name pencilled in child's handwriting on the inside cover, along with the date 1956) and a book I've never heard of before, but grabbed because I liked the title; 'Beach Music,' by Pat Conroy. (After some internet research I have learned that he is an American writer who has written a lot of books, including 'The Prince of Tides' and 'The Great Santini.') 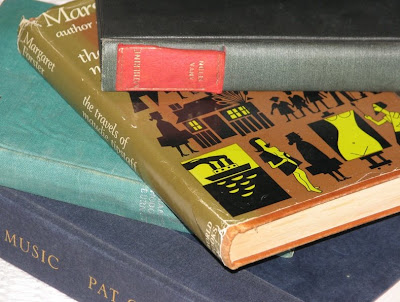 All books on the ground floor are priced at only a dollar each. Some people arrive armed with cardboard cartons to fill up. And why not?
When I bought my books a woman volunteer commented favourably on my scarf and asked me if I'd knitted it. 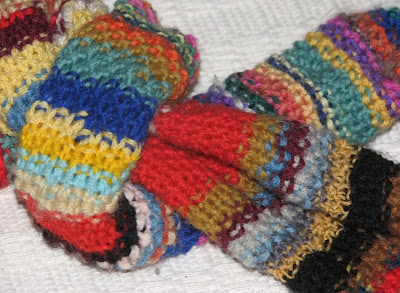 "Oh this is going to be one of those women's conversations isn't it?" said the man who was wrapping up my books in newspaper.
"No," said the woman working next to him, "It's a person's conversation."
I liked her face; it was an attractive, intelligent, middle-aged face.
"What is it about women and knitting?" the man said, undeterred by any women's lib. jibes. (Or maybe he was just thick. Okay, good-natured.)
"Women have been knitting since the guillotine, haven't they?" he continued in his jolly, good-natured way. When a band of volunteers work together - especially for twenty-four hours straight - no doubt you get this good-natured banter thing going on.
I wouldn't be surprised if my mouth dropped open at that stage. And in that manner of the brain going off on to its own tangents, subliminal thoughts sparked ...
What?! Isn't it more a case of women knitting since the dawn of time?
I didn't know people still did that - link the French Revolution and the guillotine with the act of knitting?
Is this a case of knitting giving a bad name to the guillotine, or the guillotine giving a bad name to knitting?
Is knitting going to be forever linked with the mental image of cackling, old women out having a good time?
Hey! Wouldn't it be something to knit a jersey with a picture of a guillotine on it?
Then the man remembered a fonder connection of women and knitting.
"It was great in Italy when my wife and I were over there, seeing women sitting down by the harbour knitting," he said. I swear a dreamy look - even admiring - came into his eyes.
I was feeling a little bamboozled because between all his comments, some other volunteer came up and said she was off for a coffee as she had a headache and needed sugar and the intelligent woman who seemed a little mesmerised by my scarf, continued to ask me several questions about how I got all the colours into it, what stitch it was knitted in, how I'd bordered it, how I'd managed to hide all the knots. However, I was able to do it all - answer the woman's questions, field the man's interruptions, pay for the books and at the same time note any subliminal thoughts. I believe it's called multi-tasking. Something women have been doing since the guillotine ... I mean, the dawn of time.
- May 16, 2009

When I met my husband he had quite a collection of jerseys he'd knitted himself - he never knitted in public, though. Actually, I don't think he ever knitted once he had a wife to do it for him!

And this post is how you got your own back on him too ;)

It is a lovely scarf. I love using knitting as a metaphor in poetry. I've used it once before in the last book & I'll use it again :)

Kay,
If you decide to fit another task in and do knit a jersey with an image of the guillotine on it, I'd like to put my bid in first.

Knitting always appears to me like an act of meditation; hypnosis almost.

Years ago I started crocheting an afgan but some other tasks intervined and I never finished it.
rel

I used to think that knitting was a woman's preoccupation - but then I found out, a long time ago that the Bishop of Leicester was a keen knitter. It's a useful thing to do really, isn't it? And sometimes I think quite astonishing - each one of those thousands of stitches worked by hand eventually making a scarf. Like all the letters we write eventually making a book.

Catherine - Yes there are a lot of men who knit - I should've thought of that, but I was too fascinated by events unfolding before me to put any spanner in the works. I am too much of a watcher and a listener ... (sigh.)

Barbara - Oh yes you've got it in one my friend!

And yes knitting is a metaphor for sure.

Clare - Yes a fascinating process as well as social statement at times.

Wonderful post. So glad you took the time to tell us.

And speaking of men knitting, as a little boy my dad used to knit washcloths for his family.

Belle - Soooo lovely to hear from you my friend! Have been thinking about you.

Joyce - Another male knitter - there are so many of them! Yay!

I love your quickfire thought-scatter about knitting and guillotines: perfectly done! BTW I was named after that particular Katherine. In fact, that might be my parents' book, as they sold it in a garage sale before going to Kansas. It certainly looks like it.

Katherine - Imagine it it was the self-same book! Of all the books in all the book sales!!! I love that thought! I will treat it with even more tender respect now that I know it is your namesake-book.