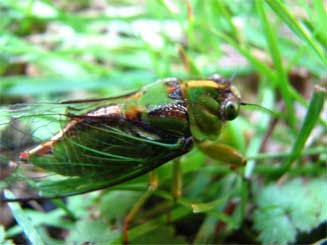 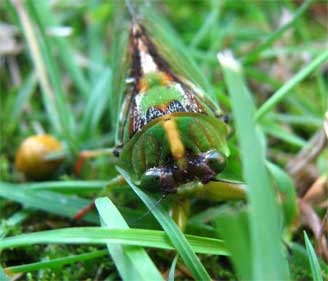 I found this little fellow by our clothesline this afternoon. Going by his sluggishness, he was probably feeling the cold, making it easier to get up close and personal. 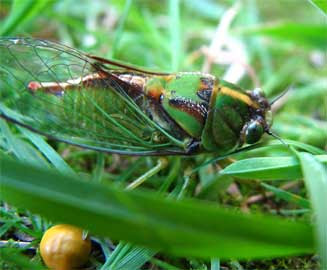 ***
Speaking of grasshoppers ... which to my mind isn't totally a non sequiter ... a plug for our son S's blog from Kyoto  It is great to see him back blogging again. I know as his mother I am biased, but he does write interesting posts. Drop in and pay him a visit.

***
A fine Good Friday. Good enough reason for a fine picnic at a fine spot. We chose Truby King Park at Seacliff. 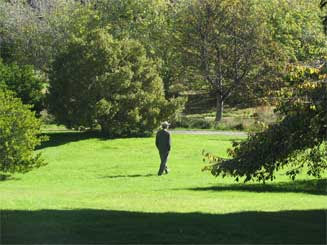 If you have read New Zealand writer Janet Frame's autobiography 'Angels at My Table', you may know Seacliff was where (in the 1940s, I believe) a young Frame spent some time in a large (and going by historical pictures of the place) a rather ugly and imposing hospital for mental patients. She had been misdiagnosed, and narrowly escaped being lobotomised due largely to the discovery by medical staff that she was an emerging writer.
Today there is no trace of the notorious hospital and Seacliff appears now to be a peaceful, secluded settlement. The road snakes around the railway line (I think we crossed it about four times) and houses are tucked away in the bush up steep driveways. Seacliff is named for the steep cliffs it is perched above and the ocean is a distant smudge. 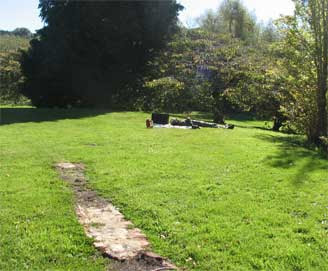 We picnicked at a spot near the remains of a house's foundations. For a couple of lazy minutes, I tried to imagine the house as it must have been. Robert vaguely paced out what would have been the front door, porch etc. It appeared that we were probably sitting on what was once the front lawn. For an instant I tried to place back the layers that time had peeled away, but found it too slippery and hazy a task. I'm no ghost buster.

Besides, the realities of hearty picnic fare was a far more tantalising prospect. 'McDinzie's Tomato Relish' was put to good use with the bread and cheese. A good Ploughman's Lunch. (Eat your heart out Thomas Gray et al.)

Ooof that spot looks so beautiful today and yet what a history!

Care for the mentally ill was truly awful not so long ago.

I love your grasshopper. Do they hibernate or die off?

I think that's a katydid, not a grasshopper. I will check my insect book, but for now, it's bedtime.
My greataunt died in Seacliff, such a sad story, she had had diphtheria as a child and was mentally retarded, when her mother died her sisters couldn't cope with her although they tried for a few years.

Crafty Green Boyfriend suspects katydid rather than grasshopper but whatver it is its beautiful....

I love these close-ups of the grasshopper. That's a remarkable story about a close escape! & the relish looks gorgeous!

Kay,
I love those lovely days of nostalgia and reverie. Oh, and of course food; romantic food shared in the light of a perfect day with the pefect partner.
rel

Seacliff, back in the day when the old hospital was there, sounds like the perfect spot for a 1940's black and white movie, starring Vivian Leigh, or Olivia DeHavilland, and Robert Young....

I have spent a while here this morning catching up, and enjoying every minute of it!

Joan Fontaine would be great, too! I can see it all now....

anna - I believe they die off. Thankfully the care for the menatally ill is better and far more enlightened now.

catherine - There sems to be a sadness about Seacliff. I believe it has lingered on in the place ...

cgp - It is a beautiful insect - whatever it is, I agree.

Barbara - Thanks! The relish is highly recommended - but my sister and partner's secret recipe. ;)

rel - Sums it up nicely!

joyce - I can see it too - Black Dahlia territory maybe ...

It is most definately a Cicada ....

Katadids have a hard wing cover where as the cicada show there clear wings ... Two very different families - Katydids are from the grasshopper family - Cicadas are not ..... By the by there are 42 species of cicada in New zealand ...

Wow thanks b in law!!! It's so good to have an expert in the family !

I love the bulgy eye look on the grasshopper.It made me want a camera that could do good close ups.

I watched a very interesting programme on TV, some years ago, about Janet Frame.

watermaid - Yes Frame's autoibio. is interesting and she was an amazing writer.

Endment - Thank you - I always enjoy visiting your site too.

I could spend immeasureable time there.
Happy Easter.