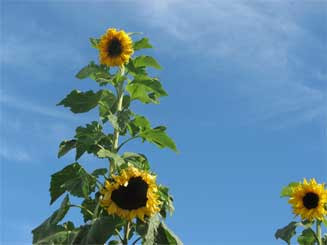 Some of the sunflowers gamely growing at work are getting old and cold now that autumn is well and truly into its stride.
Some of the later, younger ones are so desperate for sun, they've become elongated skinnymalinks, with noticeably smaller flower heads. They are like the runts of the litter. Now if we must moralise (and I think we are beholden to in the case of sunflowers, whose very existence is a moral seeing as they are prime examples of circadian rhythms; now maybe that doesn't exactly make sense, but today I am not in the mood for reason) the moral of a skinny sunflower would likely be that 'lie-a-beds do not profit'. 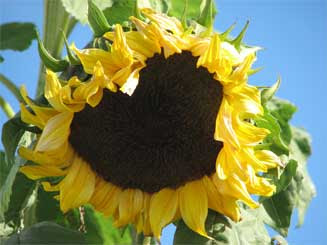 Crumpled and rumpled, the older sunflowers are beginning to whither and droop in front of our eyes. The black seeds are drying to grey. Their sunflower-beauty is fading, their heavy heads flopping. 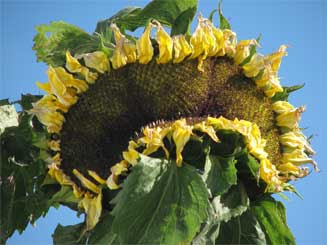 "Doesn't that sunflower there look grumpy?" one of my co-workers commented.
I agree, it has a distinct Oscar the Grouch from Sesame Street look about it. You'd be grumpy too if you could feel your once-youthful vigour draining away. Believe me.

The work I do with infants and toddlers is physically and emotionally draining. I was arriving home at nights utterly exhausted. Writing has been out of the question, as I needed all weekend to recover. A full week was becoming too much. When I handed in my resignation, with the aim to work from home doing home-based care, my boss came up with a proposition: drop to four days a week until July, when with a proposed staff change, I would be able to cut that back farther to working only three days a week. Of course it is a fianancial cut for me, but for the sake of my physical state, and just as importantly, my writing, I accepted.
I now have Mondays off, which I have strictly tagged as my Writing Day.
***
I can't believe that it is over a week ago that we went along to Dunedin's first ever Pecha Kucha night. Haven't heard of a Pecha Kucha night? Well, neither had I until artist and writer, Claire Beynon, let us know that there was an event organised here in Dunedin, and she was in it. Go Here for a treat - a transcript of Claire's very special presentation and photos. Beautiful, other-worldly shots of the ice and other weather-sculptured features of that awesome continent; Antarctica. Claire has an impressive way of capturing a detail; her eye picks out beauty otherwise missed by the rest of us who merely glance over things, and then she has the gift of being able to exquisitely describe and translate what we are looking at. The world is a transformed, wondrous place when viewed through Claire's non-jaundiced eyes.
Pecha Kucha is Japanese for 'Chit Chat', and is principally a description of the kind of chatter teenage girls indulge in. Starting in Japan, Pecha Kucha is a phenomenon that is spreading like wildfire throughout the world. I guarantee, there will be one near you! (On their website you can look at the sidebar list of April's up-and- coming events, and check if there's one on near you.)
At the Art Gallery in Dunedin, we enjoyed a high-interest-packed time with twelve speakers (artists, architects, sculptors, dancers ... to name a few) talking about their passions, with a screen showing photos to back up their words. Each speaker has twenty seconds to present each of their twenty pictures or images. There was humour and beauty; the quixotic mixed in with the normal and familiar (such as an ordinary, but well-loved-all-the-same, vege. garden.)
***
At the moment writing-wise I am working on a long poem. The poem is made up of a series of short poems able to be read on their own and still make sense. A little bit like Lego bricks. Whether the bricks are the same colour, I'm not sure.
I am getting a pile of work together (mainly poetry) that can be sent out. It is years since I sent anything out - apart from the Monday's Poem in our local newspaper, the ODT - and I am feeling very afraid. Rejections are inevitable. Rejections are cold and heartless. Rejections are the last few thuds of the hammer on the nail you have already partly-hammered in all by yourself; the one that says, "I am no good."
***

Based on a direct quote, written about what happened; verbatim.

No he says
he doesn’t want to see his little brother
through the fence.

He’s in the Over 2’s
his brother in the Under’s,
separated

by a wooden fence
they can see each other
through. No

he doesn’t want to take us up
on our offer
to say hello through the rails.

No he says, no
he won’t do that
because he says

It looks as if I have just missed a Pecha Kucha night in Christchurch. I've added it to my google reader so that I'll find out when the next one is.
Glad to hear you'll have more time for writing, I look forward to reading some of the results. I've put together a folder of likely places to submit to, I try and send mine off with no expectations so that I'm not too disappointed if they are rejected.

Great post Kay and I shall write more next time bit I[m so glad we are keeping in touch!

OMG, that poem is heart-breaking!

Glad to hear that you've got better hours now, and that your fresh day, Monday is now writing-day! Yay!

Jan - Thanks and yes, it's good to keepin touch :)

Barbara - Thanks so much, it is a great change.

Jan - Thanks and yes, it's good to keepin touch :)

Barbara - Thanks so much, it is a great change.

Thanks for the PK heads up i'll go off and have a look after.

This is a beautiful poem, you've handled a poignant situation with a really deft touch - the line breaks especially are exquisite.

Glad to hear you've ring fenced some time for yourself too - it is so important to feed that lovely soul of yours.

Glad to know that I'm not the only one who ascribes personalities to the plant world.

Wasn't there a Slinkymalinky in the story of Anansi, the spiderman?

I'm retired and I still can't find sufficient time to write. I've written tomorrow's NaPoWriMO poem today so that I can concentrate on writing a short story (currently doing a course) tomorrow.

Oh, that poem. So evocative.
the pk nights sounds like great fun. I wonder if they have found their way to wa yet?

Such treats! Thanks, Kay.

Hoorah for Mondays! I look forward to what pops out of your oven next. That last morsel was delish! HUGS

What a heartbreaking poem--oh I loved it! I also love your word "skinnymalink" and intend to start using it. Hopefully, I'm saying it right. Stick to your Monday guns.

sunflowers remind me of the frasers' garden at 64 and sunrise canola spread on the breakfast table in the blue kitchen at 62. hiya:)

Kay,
Glad to hear you're able to salvage job, youthful vigor, and writing time!!
Rejections: I try to look at it as either : it didn't appeal to that reader at that time, or maybe I need to relook it a bit.
rel

Ah, this insistent, heart-rending poem, Kay. It stays and stays.

I'm inspired to hear that you've been getting new work ready to send away. It's always a bit of a hurdle, but a good thing once done, and, too, your exceptional writing will then be available to many more appreciative others. L, C.

How precious is that? Wonderful poem, Kay.