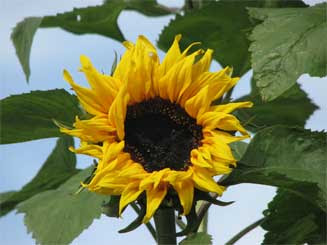 The sunflowers we are growing at the childcare centre where I work are beginning to unfurl. They are well-named, being right into circadian rhythms and following the sun. This one is the first flower to emerge (the petals look so new, they almost appear damp) and was just beginning to turn slightly to the right - or north-west - when I snapped it. I have been a fan of sunflowers ever since seeing the film 'Dr Zhivago' when I was fifteen or sixteen. 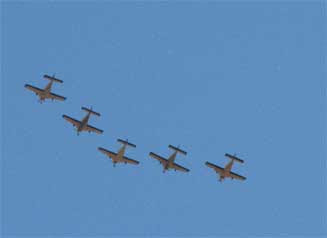 Today, suddenly, there was the unmistakable roar of planes overhead followed by a scintillating display of formation flying. I managed to capture their exit after a dazzling display of dipping and curling, with chassis glinting in the sun and trails of vapor raking the background of blue sky. Once the sound of them had disappeared, all that was left was the more grounded drone of lawnmowers.
- March 07, 2009

That last bit is a poem - just begging to be tweaked.

We didn't grow sunflowers this year ... Don't know why because we both like them ..

Lovely Van Gogh-esque sunflower. Wonder if the pilots caught sight of them...

two wonderful photos, chief!!! spring is just hinting this weekend and you've contributed to my anticipation!!

Oh, Kay, it seems like I haven't seen sunflowers for a thousand years! Well, since last summer anyway....at least the ice and snow is mostly gone.

The sunflower is Van Gogh-esque indeed!

BTW, our sunflowers here in this Utah desert came in by way of seeds caught in the mud of wagon wheels of Mormon pioneers as they came through the Midwest. Now they thrive.

Lucky you managing to capture planes in formation on your camera. I'm always too late to snap them when they make a rare appearance over our house.