As promised last post, here is the poem I wrote about the footbridge.
Re-surfacing
(the fall and rise of Dunedin’s Footbridge)

Just one of tons
that have passed
underneath

in one hundred years,
this day
this one wagon whacks it hard,

the freak release
of high, iron flaps
the bridge’s undoing

and it falls,
its back broken,
beggared

as the snapped deck
of a skateboard,
the hefty iron bones

of its crumpled spine
gathered up
by workers

and sculptors
to re-twist,
re-gain.

right down to the rivets
and shade of paint,
Golden Gate red,

to ride again
the light and motion
above the tracks,

to span the space
between harbour and city;
water and stone.

Kay McKenzie Cooke
(For details about the exhibition, see my last post.)
The exhibition opening Friday night was well attended, with a positive, engaged hum in the gallery. A comfortable, grounded synergy was created by workers and artists meeting on common ground. Being an exhibition about a railway footbridge, meant that there were metal workers and mechanical engineers involved, working alongside and advising the artists, sculptors, photographers and poets.
The featured sculptures were made by talented sculptor, Lawrie Forbes, from (among other iron, railway-related pieces) parts of the railway footbridge after it was damaged by a freight train wagon and had to be destroyed. It was amazing to see how the heavy metal of old rails and parts of the old metal bridge were encouraged to flow, bend and curl. 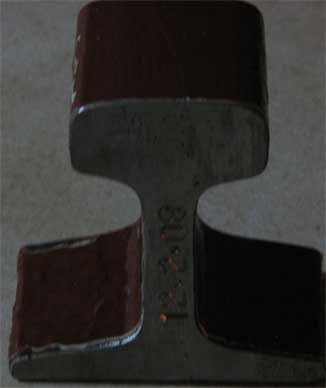 We bought a paperweight made from part of an old, 19th century railway line. This is a deceptively heavy little piece; no papers are going to blow away from under this baby! It would actually make a good door stop. It was fascinating to see how much the lined-up paperweights looked like the vertebrae of a whale - much like the image evoked in both my poem and Mike's painting.

My poem was written out on the wall by Mike. 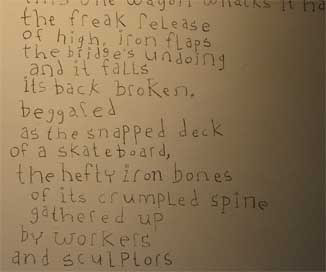 This is Mike's painting in response to the poem. (He also did a couple of drawings which I will get a photo of later.) He picked up on the whale's skeleton idea and came up with the image of a dog's snapping jaws for the wagon that damaged the bridge. (Yellow and blue are the colours of the locomotives.)
Mike was up all night last night finishing the painting. As his studio is in our basement, he opted to grab a couple of hours kip in our spare bed before getting up again to go down to the gallery and help them set up. Oh well, tomorrow's Saturday so he can sleep all day. (Poets have it easier than artists I feel. There is often a lot of messy, hefty work involved for artists. In contrast, poets just float about in a distracted manner, shuffling pieces of paper.) 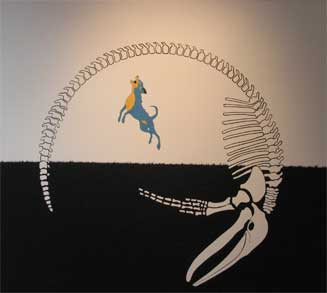 Getting the rather large painting down to the studio meant R had to borrow a trailer from his workplace, and a friend's car with a tow bar. We bundled and roped the painting up and drove as quickly as we could because we were both cribbing time from our respective workplaces, and running late.
When we got back to the car (which we had to park over the footpath) a parking officer was about to write us out a ticket. We managed to persuade him otherwise. (Whew.)
Then when R stopped over a driveway to let me out at my work, a woman reversed out from her garage and proceeded to back into the trailer! "I didn't see it, " she said. When I got to work and told them of the mishap, I was reminded that it was Black Friday. "But I don't believe in it," I said. Heads were ominously shaken.
As they say, things happen in threes and our third close call came when we were driving to the opening at five o'clock. As we were approaching the gallery, a car began to pull out into us from the lane in front. R leant heavily on the horn and luckily managed to avert another collision. "Number three," I said and breathed a sigh of relief.
At the exhibition, along with other historical railway artifacts, part of the original, 100-year old footbridge is there for people to walk over. 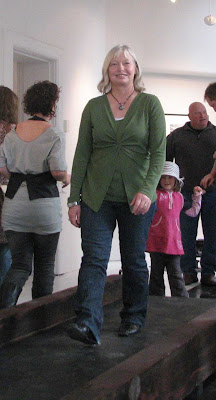 All in all, a thoroughly enjoyable evening and a really good exhibition for people to go along and view. If you are in town, naturally enough I recommend you go along.

Next post will be about about blackberry jam and beetroot chutney. Watch this space!

such an artistic family :O)

Will have an interest in the Jam and Chutney post :O)

Amazibg work on both counts Kay. You are truly a gifted bunch.
I wish I was there to see it for real.

I love the poem on the wall idea, it really makes it come alive and feel as hand-crafted as the bridge and the painting.

Great to hear that it all came together on the day, despite the mishaps and the day that was in it...

I think the poem's shape really complements the contents - great work and the painting makes both the visual/text work well together, a very neat job.

great poem, love the writing on the wall and a great painting....you are all so talented....didn't come from the mck side of the family....well maybe a little but not a lot :-)

am wondering what kind of blog could possibly be written about food!!!

Great fun reading this.
You sound a super famuky as well as a talented one!

dinzie - Everyone has their own talents - your artistry lies on the vine!

apprentice - It all came together beautifully due to Cecilia's mastery of collaboration.

Barbara - Thank you! Thumbs up for collaborations.

mcd - Wait and see re the food blog - it's a work in progress at the moment.
As for the talent in the family - McKenzies were talented farmers ... good with dogs ... and good land tenderers and tamers ... ring a bell?

Jan - I do so love the idea of being part of a super and talented famuky!!! :)

Naturally, I will go for the superficial first--YOU LOOK SO GLAM!!! And your poem isn't chopped liver either, haha. Your poem seems like the bridge--
carefully crafted.
b

That poem was fabulous Kay! You look great BTW. :) HUG

Congratulations to you both!

HI Kay - what a great collaboration between you & Mike, Collaborations Gallery and the community at large. Your poem is like a living memorial to that historic metal structure. There's something magnetic about bridges, isn't there? L, C