*Offing - the name for that mid-line space off the foreshore, just before you get to the horizon. Note: Do you ever reach the horizon? 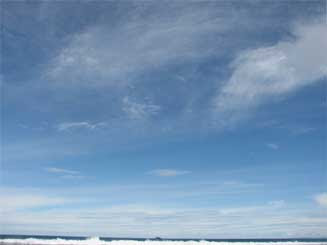 Today started off with me grumpily vacuuming ... or as every true Southlander - which I do call myself - says, 'luxing (derived from the tradename for the vacuum cleaner called Electrolux.) Whatever it's called, it's no fun! However, come low tidemark, I was outta there. After dropping R off at golf, I headed for the beach with all thoughts of housework banished into the offing*. And the day slowly transformed itself into calmer tones. 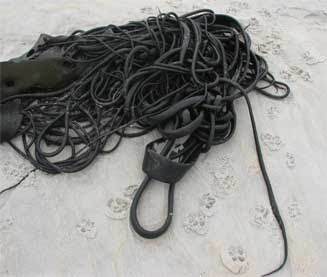 After twisitng and turning into a knotted-up, twisted skein, this bunch of kelp has formed a perfect noose! Or, going by the dog pawprints, maybe a dog collar ...

The sea is a hungry dog,
Giant and grey.
He rolls on the beach all day.
With his clashing teeth and shaggy jaws
Hour upon hour he gnaws
The rumbling, tumbling stones,
And 'Bones, bones, bones, bones! '
The giant sea-dog moans,
Licking his greasy paws.

And when the night wind roars
And the moon rocks in the stormy cloud,
He bounds to his feet and snuffs and sniffs,
Shaking his wet sides over the cliffs,
And howls and hollos long and loud.

But on quiet days in May or June,
When even the grasses on the dune
Play no more their reedy tune,
With his head between his paws
He lies on the sandy shores,
So quiet, so quiet, he scarcely snores.

I have loved this poem ever since hearing it recited by a girl called Janet (who later became a very good friend of mine) in 1971 in the Dunedin Wool Exchange (which the Dunedin Teacher's College was using as a lecture room.) 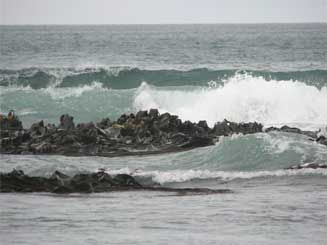 I prefer the St Kilda end of the beach (as opposed to the more coffee-set St Clair end) for its drama of kelp and rocks. The movement of the bull kelp in the water is a calming, beautiful dance of leather straps; coiling, twisting, floating, dipping, diving, waving .... 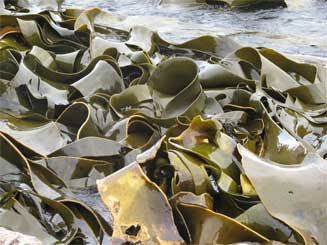 I stood on the weathered, lizard-skinned rocks near Lawyer's Head, and watched huge masses of the kelp slurp and squirm with each tidal surge.

There are more photos I could post of the rock pools and rocks; of a nest of stones; but I think I will save them for another time ... 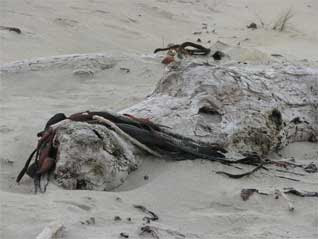 and leave you with this croc washed up on the beach by the tide ... or is it a happy sea horse?

A waltz,
this sound of suck
this sight of bronze
fronds, as waves slap,
surge and each tug
of wave through
is like a comb through hair,
fingers through grass and the kelp

again sways as if
in joy or pain. Yet
surely truer to say
this is simply momentuum?
But my eyes do not want my brain
to think but just enjoy
these sounds of tongue
and throat, this grave
and beautiful dance.

Beautiful post Kay. And thanks for teaching me the meaning of "offing," I love anything to do with horizions.

I've always loved the James Reeves poem, and I enjoyed yours very much too. Another sea poem that is a favourite of mine is "Green Lions"
http://oldpoetry.com/opoem/30979-Douglas-Alexander-Stewart-From--Green-Lions

It is a happy sea horse.

What poignant poems, Kay. A lovely ode to the sea.

I miss the ocean. I think I must schedule a trip to see that old friend very soon. There is something so cathartic about sitting in the sand and letting the sound of the crashing waves wash over me.

Great word, 'offing.' Not one poem, but two and I like the dialogue between the JR poem and yours. Thanks for the lift!

Wow, that DOES look like a croc---everything on the seashore takes on that "profound" look, doesn't it? Beautiful pix. Thanks for taking them.

Love it! I always want to thank you for these beautiful glimpses of home.

Lovely poem of yours, specially the grave and lovely dance of the kelp. Wonderful photos too.

i was right there with you, kay, thanks to your fine spinning of the tale.

no kelp from the atlantic like this. wow. i can just see it being tossed by the waves...

thanks for the poems and the photos - i can hear the kelp as i read and smell the saltiness of it all.

it makes me feel at home and homesick all at the same time!

It sounds as if deserting 'luxing' for the sea did you a power of good.

A great waft of iodine comes off the page when reading this.

Lovely post Kay and I enjoyed both poems very much. I love the shapes kelp gets itself into, especially underwater where it seems to create great hanging galleries.

now why when you delete a note does it tell the rest of the world you have deleted a note and then not say who it is from so we can all go...tsk tsk????

I love kelp....kelp balls :-) I made one for djd when we came down so many years ago

Cy - Thanks. I like the word offing used in its original oceanic context,ever since I read a Heaney poem that used it in that way. Good to see you blogging - I will link to you on the sidebar of my blog.

catherine - Thanks! I intend to follow up that link you've given me. I haven't come across that particular poem before ... and now I am intrigued!

Mama Llama - It is a gift living close to the sea, and I don't forget it.

Barbara - Thank YOU for the lift as well!

becky - I really can't get over how much it looks like a croc either ... Profundity in the sea and sand ... I like it!

Di - Thanks, my pleasure!

CGP - Thanks for your kind remarks, it's great to get the feedback.

kd - It was fantastic just to have the time to just stand and take it all in. The slurping dance.

kj - Thanks. I know you love the beach too and all its magic.

ccm - I'm so glad you got all those levels and layers from the post- you added your own experiences and that's great - Thanks.

watermaid - it certainly did - althoI did manage to get the 'luxing done first so had a clear conscience!

apprentice - Thanks so much, that gives me a boost to hear you got all that from the words and pictures.

McD - kelp balls! I hadn't thought of those for years!

Kay,
"Do you ever reach the horizon?"
I think we do, but once we do we can't come back.
rel