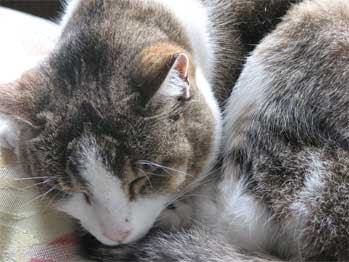 I have no idea what to write about these days ... hence the long silence. Maybe I am bored with myself.
Anyway, here are some quirky thoughts and random links.

1) I know something Kim Hill didn't know (which is saying something) ... During an interview with David Haywood on radio this morning, she said she didn't know what an auto harp was. I remember as a child we used to have one at primary school (probably part of the Ministry of Education's musical supplies to schools back in those days). Also and anyway, Joni Mitchell plays one on her song 'California'.  (And while you're at it ...  Joni and Johnny Cash singing beautifully together; way, way back.)

2) Yesterday while looking out the window at work - which is in an old villa converted into a childcare centre, and facing the street - I spotted a woman walking in the sunshine. For about a fortnight (which for my American readers is our word for a two week period) we have had rain, rain and low, cloudy skies ... so a walk in the sunshine was a novelty. Anyway, she looked like she was following her thoughts ... I could picture them like a thread falling from her forehead down to the footpath in front of her feet.

3) That day at work, also, there were two little tops hanging outside in the breezy sunshine. They belonged to two little girls who had managed to get to the taps (faucets) to play with the water, soaking the sleeves of their tops so that they had to be taken off and replaced by clean, dry ones. There were the tops, red and pink, pegged up by the shoulders, giggling and jiggling in the wind. (At the end of the day and pick-up time, the mother of the 'red top girl' would be cross because it causes her too much laundry when her daughter goes through too many clothes at play, whereas the mother of the 'pink top girl' would just laugh.)

4) The Mountain Goats are wonderfully quirky. My favourite is the 'Snow Owl' song. My friend Katherine has given me a couple of links to their songs. Here is one of them.

5) M is looking for fulltime work, but at the moment is doing temp. labouring jobs the employment agency is throwing his way. So far he has worked on a site where a new cemetery is being constructed. One of the men he worked with was from Manchester, England and upon being informed by M that he was an artist said, "Oh no, a fuken artist." But he did ask if M could paint him a soccer player. To get to that job M walked an hour and fifteen minutes each way, over the hill from St Clair to the suburb of Green Island (if you know anything about Dunedin, you'll know that that is a blimmin' long way.) The latest job he had was on a recycling rubbish truck where he had to ride the back while sorting all the rubbish tipped out from the bins on to the tray. He spent the day vommitting from a combination of motion sickness and the fumes from the rubbish. He said the worst smell was shampoo - especially when mixed with the smell of alcohol. (So spare a thought for the ones who have to deal with our rubbish, whether we recycle or not!) 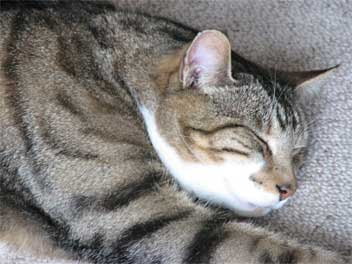 bored with yourself...hmmm...nup cant say that would be it....has the weather been a pain in the butt..yep I blame that :-)

I feel for M ...I still have memories of a 20 mile bike ride in the middle of an english winter to a job humping sacks of farm feed on and off of lorries ....

Mind you FIT !! like I've probably never been again :O)

I know what you mean about not knowing what to say. The blog is an insatiable beast that must be fed and you wonder, what have I started? I go through this too. The "top" mothers is a great story. I can picture that. And your little kitty has the right idea--we should all relax more, eh?
b

Kay,
I have no earth shattering thoughts to create a competent comment.
You did come to the page and isn't that what the writing gurus say is the important thing?
After spending a time cleaning the contents of a dairy herd's excrement I can sympathize with M's nausea and vomiting after sorting garbage.
rel

Tough times for the artist, eh? But he's a tough 'un sticking out what he's been through so far; if he were a writer, he'd be incorporating those experiences into his work. I bet he is anyway :)

All of these things suggest wee poems to me, BTW.

I checked out the Joni Mitchell links, I love some of her songs but to hear her singing them - I actually thought her voice was quite thin and found myself thinking "She wouldn't get far on American Idol" :)

I must get out my old Peter Paul and Mary records to see what they sound like!

Our creativity and hobbies ebb and flow just like everything else. I've been facebooking for charity, adopted a pet and have a virtual farm. lol HUGS

My favorite is the lady that you saw walking in the sunshine. I love the way you wrote it, that you could almost see her thoughts coming out... so great!

Friends (and sister-mine!) and b-i-l - Ta muchly for your ever-present support and bolstering, and most of all, interest, in my boring life!