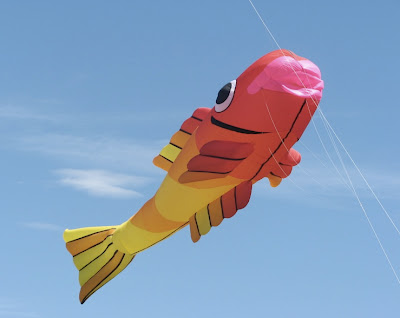 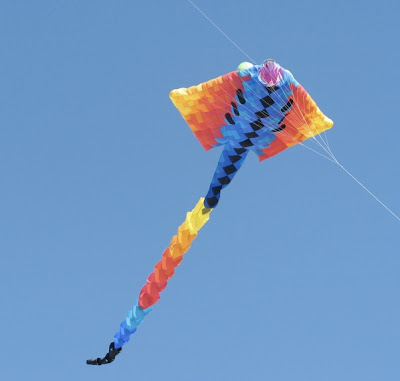 K and I went to the Farmer’s Market and spent a pleasant hour meandering, drinking coffee and sampling a gluten-free sausage each, followed later by a gluten-free pancake each. (At first, just by the way it was written, I thought the pancakes were Free! But - duh - it was announcing that they were (Gluten) Free! Oh well.) We bought white turnips and choy and free range eggs. Nothing like buying local, organic stuff. Later on in the day when I went to the supermarket, I found it full of produce from USA and Australia. 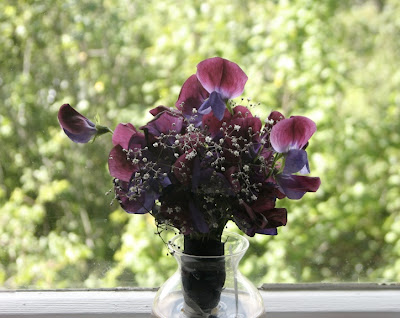 We also bought a bunch of sweet peas, the smell of which brings back the exquisite boredom of childhood summer days, quicker than a wink.

After the market and a natter in the shade at her & M’s place, K and I went for a stroll along the beach. (They are lucky enough to live within a stone’s throw.) She told me of her love of sailing and how one day as a ten year old at sailing class, she decided she’d set her sail for the wide, blue ocean; causing a rescue boat to come tearing after her. She said that her two favourite places in the world to be, would be either on top of a mountain or in the middle of the ocean. Can't say they would be for me ... I like a little contact with the safety of edges, frames and borders. 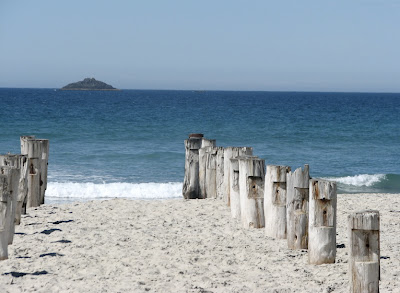 These are the same poles that I have posted a photo of in the winter when they were seven feet tall with the sand level up to their ankles. As you can see, yesterday they were only two to three feet tall and buried up to their chests. What a huge amount of sand the ocean hauls about. 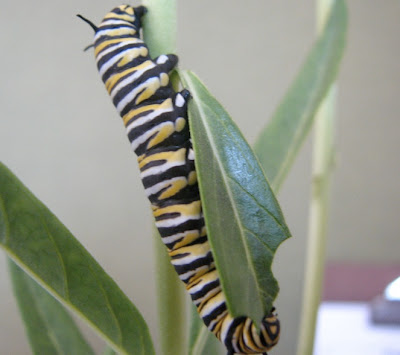 And finally, here is Casper the Caterpillar who is at the Childcare Centre where I work, chomping his way through a swan plant’s leaves before wrapping himself up into a chrysalis and then emerging as a butterfly. I will keep you posted on his progress. I have a bit of a weird theory that my life echoes the four stages of a butterfly (egg, caterpillar, chrysalis, adult) changing every seven years. At the moment I am approaching the egg stage for the third time. (Do the maths ...) ‘In the light of the moon, a little egg lay on a leaf ...’ (Eric de Carle.) Another way of looking at it is that I’m entering into my third childhood!
- January 25, 2009

I think there's lots of imported fruit in the supermarket at this time of year because it's a little early for harvest here - but the stonefruit is local, and delicious. In fact in our house we only have to step outside for plums off the tree!

Hasn't the weather been glorious the last few days? I had a great afternoon too (see my blog)

Kay,
Don't you think the child's perspective to be so much clearer and fresh?
The nice thing about 2nd and 3rd childhoods is that we don't have parents to forbid us to think foolishly. ;-)
rel

Kay, I've missed you! I wish I were there as I recover looking out at the snow. lol

I must read KJ's book, thanks!

What a lovely post, full of bright colours and evoking lovely scents -a really tonic on a Scottsh grey January morning

It is so cold here in New England ... thanks for this burst of warm weather. I needed it.

Catherine - The summer is good.

Tammy - I guess the outdoors are beckoning a little too much these days, taking me away from my keyboard.

Apprentice - That was a week ago and today the grey skies are visiting again - they are never far away; winter or summer. However to me there is beauty in all; whether blue or grey :)

Becky - I expect you to repay me when the tables are turned in July!
I said hello to Casper, but he was a bit busy!

January - My pleasure - happy to oblige; you're welcome! :)

Such lovely photos of your warm, sunny NZ! A big improvement over the cold, grey skies of Paris, although the sun is trying to shine through the clouds. I like the caterpillar - and childlike wonder is good at any age, right?

In college, when I lived in a dorm and couldn't keep a pet, I kept in a drawer--a caterpillar that bloomed into a beautiful, furry, golden-eyed moth!