Firefox, Safari ... both aren't delivering. It seems that I have to read my posts (and latest blogroll posts) from the edit page because when I go to the main page it is days behind - including the posts on blogs I like to follow on my blogroll ... it's all beyond me ... and because I don't live in San Francisco, I can't pop in to see them at Blogger / Google for the cup of coffee they invite you to (on Blogger Dashboard) or complain in person.

Last night I went to see Cats with my daughter in law. We sat upstairs and near the back, so got a good overall, aerial view; but then it was hard to see the faces and close-up of make-up and costumes. But ah-ha! Canny me did think beforehand to take binoculars. This meant that we could every so often sneak a close-up peek. That was fun. Especially as a daughter of a friend of mine was in the production (she was Etcetera) and I could get a good look at her performance. I can confirm that she remained in character even when she was in semi-darkness, reclining very cat-like on the stairs. It was a brilliant production by the local Operatic Society. I give it a ten out of ten.
However any feelings of being a clever person for thinking of taking binoculars disappeared when at interval, a smiley, friendly woman approached me as if she knew me ... I was frantically running through my mind who on earth she could be. She realised my mystification and told me her name. Still I couldn't think who she was. And then she said, "Your cousin!" in an astonished tone. (And it wasn't a case of long-lost cousin either - I'd only just seen her a couple of months ago.) I was so embarrassed at myself. Of course it was her! It was like not recognising one of my children (which I have to say I have been known to do when they have appeared before me in town or somewhere I haven't expected to see them. I've been known to look at them with a stupid, who are you? look on my face for a few seconds. Duh! It's only one of your own!) Is this some kind of condition? Does this happen to anyone else? I'd appreciate some feedback. Absent-minded is probably the old-fashioned explanation. I hope my cousin understood and made allowances. (She probably did, after all she has known me all my life and I have a reputation for ... how shall I put this ... being slightly ditzy?!)

***
A lovely, mild Spring day. I spent a pleasant hour up the back of our garden with the sparrows, reading. Our garden (what there is of it) has an unshaven look about it; but who's looking at weeds today? 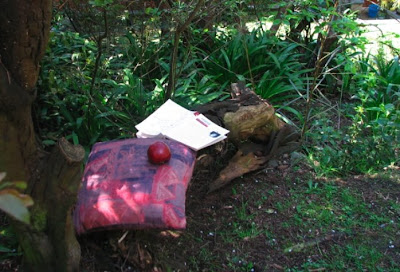 Not while I have my nose stuck in a Joyce Carol Oates' book, 'Un-censored - Views and (Re)Views.' 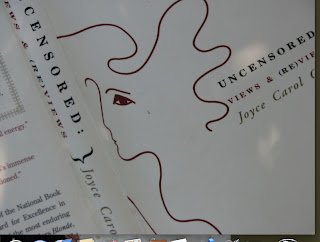 An intelligent, insightful overview of some well-known books and writers. I have added a lot of books to my mental 'Books To Read' list. As one of the reviewer-blurbs on the back said, the book leaves the reader with the 'desire to read all the books mentioned.' I found the section on short stories especially inspiring.  And there's a great chapter on Anne Tyler, who is one of my favourite writers.

I've run out of time. Sunday night has long ago merged into Monday morning, so next post I am going to attempt to address a Collective Poem written by some of us over at the Poetry Collaborative.... watch this space and go  here for original version.
- September 15, 2008

've been known to do that kind of thing too. I think it's when you are really in the moment in a place and someone you don't expect to see pops up in front of you and your mind, or the bit dealing with recognition, just freezes.

Sunday pm here, I think I deserve a G&T before feeding the 5,000 again.

I once attended a concert in which my daughter was scheduled to perform. I walked in a bit late and saw her sitting a few rows in front of me with a big threatening-looking guy, rather a bodyguard type I thought. I looked again and it was MY SON. Yikes! I can totally relate to what you said.
Joyce Carol Oates is one of my all-time favorite authors. I read Gravedigger's Daughter recently and was mesmerized.

I can view quite a few using ie7...It may be your PC..You should look at the memory utilisation perhaps .....

My boss went to Google earlier in the year .. No one older than early 30s...

I worry about not recognising students, or remembering their names, but then there is a lot of them and they all have very similar names! I generally have the opposite problem and recognise people I wish I could forget!

Hope your blog/google page finds its way back soon!

Didn't recognize your cousin...? Yikes. Well, an extra tight hug and dinner together sometime should clear all that up.

You are no ditz. Far too creative for that.

By the way, I have something for you over at my page.

Faces I remember, names forget it! I'm pretty creative at covering it up. LOL You're not alone. ;)

a ditz you???? why who would call you that?? certainly none of your closest living rellies...never a sister!!!!!

Hey! We have tickets to see CATS (again) this coming Saturday, a matinee, with 7-yr-old Simon, (who loves the CD). Cost=$43.00 a ticket.... Here we are on each other's wave-lengths again, living our parallel lives, cousin!

apprentice - yes I believe you are right. "Brain freeze' is a well-known sensation for me!

becky - I don't feel so bad now!
Must look out for that book.

dinzie - I do think it's bloger - seems to have righted itself now ... Young geeks??? Oooh they may bar me now.

scarlett - Thank you for the ups!

jopyce - What a wondrous planet! Cuzzie!