Just to prove that Spring has arrived, here are some photos I took on Sunday. I met a friend for coffee at the Customhouse Quay cafe, where the harbour is visible from the windows. Dunedin has at long last decided to do something about its asset of harbourside views, and is slowly converting the industrial nature of this area into a more attractive place for visitors and citizens alike. Pity that it is always so windy. However, nothing that a little clear weaterproof-plastic, or indeed glass, won't fix. 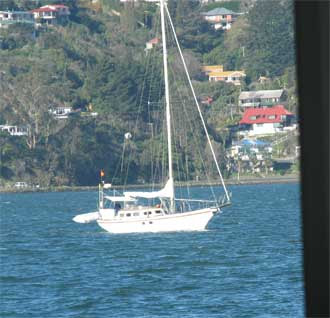 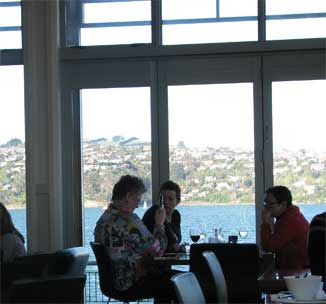 Below is the view on Sunday morning from my office window. The morning was little misty, but calm and warm, and soon the sun burnt off this fine veilt of mist to reveal the day's inner workings. 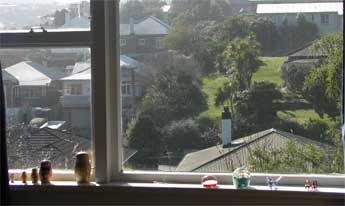 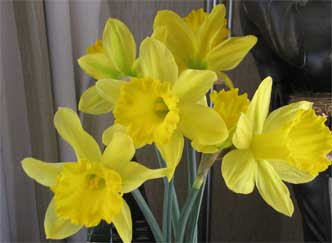 R and I sat outside and ate bacon and egg for brunch. This was our view - steady old Mount Cargill in the background. 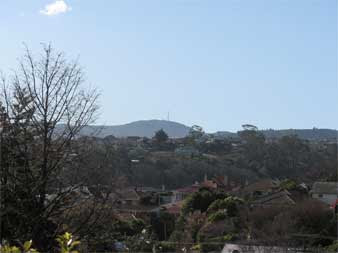 On the way back from having a coffee with my friend, I walked along Portsmoiuth Drive. This shag (cormorant) may have been feeling a little crook, he or she didn't seem to want to move. After working as a guide out at the Albatross Colony for the summer, where there are also colonies of Stewart Island, among other varieties, of shag, I should be able to identify this one's type, age and gender ... but alas, I have forgotten much. 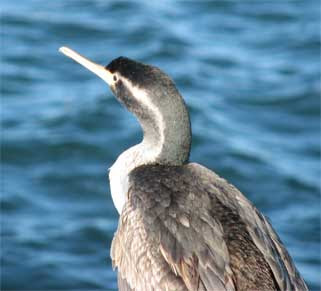 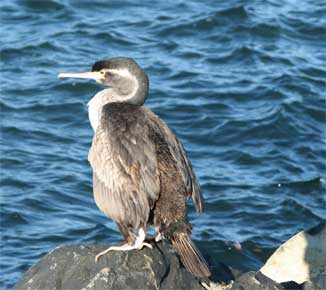 Doves and pigeons were settled in a sunny nook on this rock face. In the past, this was a quarry, now it's just a danger to passersby because of falling rocks. I never know what one is meant to do about 'Beware of Falling Rocks' signs - go past faster, or slower? 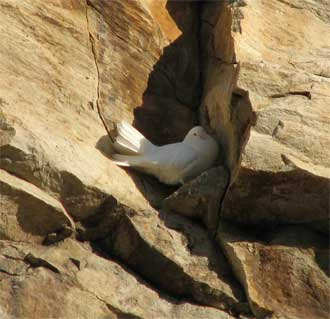 Any spring winds are greeted with exuberance by wind-gliders  - or whatever they are called. 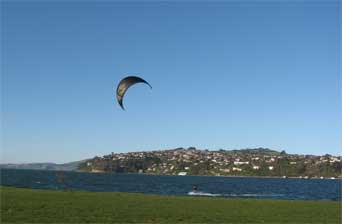 ***
One day I am going to organise something for this fantastic idea - go here to see what Dana and Dave have manufactured, conjured and whipped-up in a trice. Poetry on a postcard is the idea. And when they get enough poems on postcards, they want to display them in cafes and such-like. Yes, let's do it!
However and but. What I need in order to complete such creative wonders is: time. Ah. Time. As John Rowles (though for Americans I believe it was Gene Pitney) sang back in the early seventies - or was it the late sixties? Whenever it was, it was back in the mists of time - Ha! - 'If I only had time. Time, like the wind, goes a-hurrying by, and the hours just fly. Where to begin, there are mountains to climb if I had time. Dreams to pursue if I only had time, only time. So much to do if I only had time ...'  (This song my research tells me, was originally written by a Frenchman. Ah! Oui. The French understand. ) 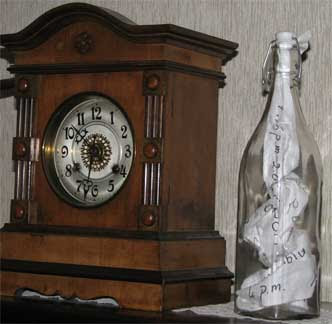 And lying awake in the early hours hearing great Aunty Phyllis' doleful clock chime once for 12.30 p.m, once for 1.00 a.m and once again for 1.30 a.m is like hearing time trudging off the cold, dark ledges of the night into some abyss to lie lost, silent and alone.
Maybe I can write a postcard poem about it. One day. When I have time.
One of my favourite singers is Jim Croce. His song, 'Time in a Bottle' is one of R and my favourite songs.  Every year R's work has a thing called Secret Friend Week where for a week they get anonymous presents. (Aww - 'nt that noice?)
To help each other out, everyone writes down some hints for the Secret Friend - such as 'I like chocolate'.
R wrote that he would really like some 'time in a bottle'. His secret friend was a creative sort and each day R received a version of time - from an hourglass on Monday, to a Time-Out chocolate bar on Thursday; until on the Friday, the coup de grace -  a bottle with some time in it. 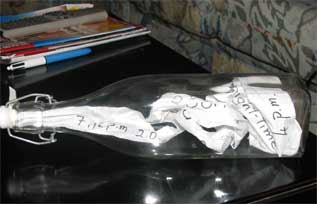 (He never found out who the person was, but the Time in A Bottle is now a prized possession.)

Great pix and posts as always. I'm with you on that watch for falling rocks thing. Maybe they mean for us to drive by screaming. As you embrace nice weather, we will soon be saying goodbye to it. Enjoy.

Heh. This morning Salt Lake City is full of hard rains, hail, and wind.... Had the heat on for a while this morning--first time in ages.

Welcome pictures, I know you love spring, by the way you post and write about it.

Now, that time in a bottle has me thinking very hard, indeed. I could use some of that :)

Time in a bottle! What a great idea! Although if I had more time I'd probably just end up wasting it!!

I think that's a pied shag, the most common sort, unless it's bigger, and then it may be a king shag (though I'd have to check my bird book for that one). It probably wasn't sick, shags do tend to keep quite still. They don't have oil in their wings and have to sit still to dry in the sun for quite a long time after they dive for fish. You'll also see them with their wings out to the side - they always remind me of the teachers at assembly in my school days, wearing their academic gowns!

Kay,
That time in a bottle thing is wonderful. I too, find Croce a favorite.
There may not always be time to write, but there is always time to witness and enjoy nature. :-)
rel

Yes lovely pix and post. i loved the postcard poem too, though it smacks of love in warm waters lol!

I think the marriage of image and poem can be a wonderful thing.

The daffs remind me again that we are at either end of some gaint seasonal see saw -and you're on the up again missus!

Time in a bottle. What a great concept to ponder. I have, of course, heard the song but never much taken the--well, time--to think about what one could do with time in a bottle.

I remember your frustrations many moons ago about posting photos on your blog. Now you have woven them into your writing to allow them to fill in the very few gaps your words leave. Thank you.

That is such a clever idea... time in a bottle.
Now you can sell it... and make a mint.
Everyone wants extra time. Hot commodity, that.

I don't know what to tell you about the falling rocks. We've got those here too, right by the roads when one drives up into the mountains, and from time to time, some come down.

Be careful, I guess.

I'm so glad that you take your camera with you while you are out and about. You always come back with winners!

joyce - Wow what a dramatic place you live in!

barbara - I enjoy autumn even better strangely enough - I get very nervous of spring - all that exuberance is a bit too excessive for my liking!

Fearfully made - don't we all!?

Catherine - Thanks - you may be right but I don't recognise those species you mention as being the ones that inhabit Dunedin's harbour ...

apprentice - It's amazing the difference in the earth's tilt.

mama llama - I really enjoy the process too now.

scarlett - Yes I am sure if we could sell time it would certainly be a winner!

Winter is still making itself known though ..McD and I wandering abouts the garden tucking sensitive potatoes and beans etc in with newspaper in advance of the new weather forecasting a frost !!