I have tried to be a little arty with the photos to cover the fact that they are out of focus and carelessly taken.
The fourth reading of the winter season run by the Octagon Poetry Collective was held at the Circadian Rhythm cafe on Wednesday night. And at last I have some spare time to put in a wee report. 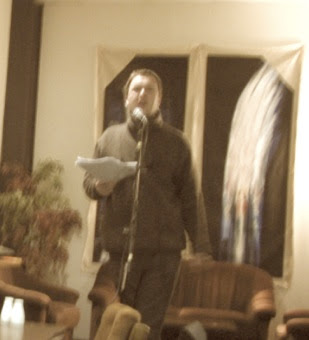 Richard was the host for the night and as such his role is to introduce the featured poet for the night - in this case, Bill Direen. A poet of some merit himself, Richard is a staunch promoter of poetry in the south.
To be introduced by Richard is to be bathed in glory! Articulate, fresh and lavish, Richard's introductions can never be accused of being tired cliches dutifully trotted out for the occasion. When it is my turn to introduce noted poet Jenny Powell in a month's time, I only hope I can do her as much justice as Richard did Bill. 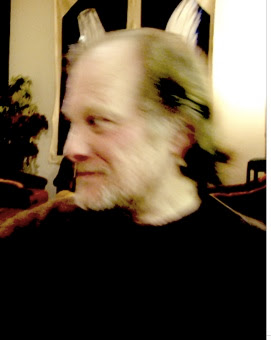 Here we have the poet Peter Olds.
At the risk of trotting out tired old cliches myself, Peter is almost entitled to be called an icon, at least in NZ's poetry circles. He read an amusing poem about the late and revered (and very much missed by Peter and other NZ poets / writers) Hone Tuwhare. I now have Peter tagged as a source of info on Hone for the tribute I am doing on him in October at the Speech and Communication teachers symposium. 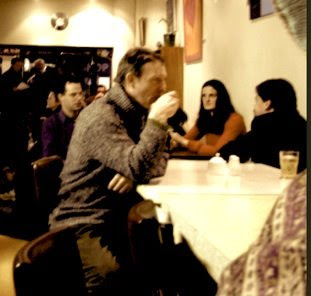 And talking of established and well-knowns; Bill Direen (who is as well known in avant garde musical circles, as much as in poetry circles) was the featured Poet for the night. He treated assembled, rugged-up Dunedinites condensing the cafe's window glass, to an enjoyable, high quality reel of poems. I was particularly charmed and drawn to his landscape poetry. In my humble opinion, Bill is one of our finer exponents of this particular genre. He is able to knit into the landscape descriptions of relationships so that the two, nature and humanity, meet and fit perfectly; naturally. 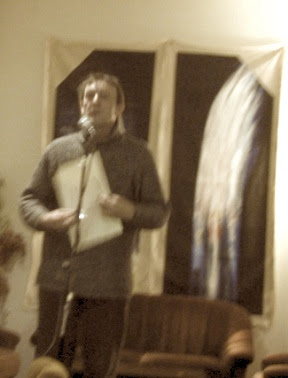 Other readers at the Open Mic were myself, David Eggleton, David Holmes, Angela (I've forgotten her second name ... but she's definitely a young poet to watch; she is an adept wordsmith.)
There were also a couple of other readers I hadn't heard before.
All in all, a night of quality poetry. We left feeling very satisfied, both with the poetry we'd listened to and the meal of samosas and other Indian fare we'd enjoyed before the event.
- August 23, 2008

A really warm, intelligent report, Kay. It sounds as though it was top quality stuff - good luck when it comes your turn to host!

I like the photos - there's something very active about them, rather than them being a moment caught in time, or a pose.

Dunedinites must be a hardy lot, in Christchurch winter poetry events have never been much of a success. People won't come out on cold nights.
I'm not familiar with Bill Direen's work, perhaps it is time for another trip to the library

Kay,
One of the advantages of city living!
rel

Sounds like an event I'd have loved to be part of. Samosas and poetry should be a sublime combo.

That does sound so enjoyable. The effect the pictures has is one of action...I guess I'm agreeing with barbaras above. Almost like a capturing of the movement the poetry evoked...

Long live live poetry! Sounds like a great night. And the photos are fine, very lively.

you have a poetry crush...I can read it all through your words...and you a married woman :)

oh by the way I actually decided to start writing diary entries again....have no idea why...just somewhere to share my piccies I think :)

Nice write. I wonder if Peter Olds is any relation to Sharon Olds?

It reads delicious and made me wish I was home and could have popped in to listen a while.

I need a night like that--and thanks to your report, I almost feel as if I had one!

What a grand account of a fun night!!!! I can't wait to hear about your own tour. I'll bet you are thinking of good lines right now. You will be great.

catherine - he's not really known for his landscape poetry - I don't know how many he's written, but the ones he has written are extremely fine.

rel - Yes but to live away from the city does have its attractions ... :)

rethabile - Yep! Would be nice to have you drop in sometime you'd feel right at home, I know!

mcd - Oh get away with ya woman! It's actually a love - hate relationship if truth be known.:)

Joyce - oh how he would chuckle at that idea!!! (Maybe in the distant branches of the family tree?...)

di - I bet you make it there one night.

becky -I am getting ready to do justice to the poet I am introducing. Hope I do so, it's quite a responsibility.