Cousins, Communications and Co-incidences - Or - Blood Will Out.

My father always found it amusing to state, "I was an uncle before I was born." When you are born at the tail end of a large family, this can happen.
A year and a half ago a cousin in Auckland got in touch with me after he came across my website. It was crazy and amazing. He was one of many, many cousins in our huge Catholic, extended family, that have never met. However, this particular cousin I did sort of feel I knew - even if only as the little, fairheaded boy in a black-and-white photo that through the early part of my childhood, was always pinned next to the mantlepiece in our kitchen. 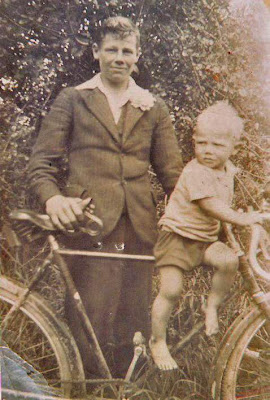 In this photo, he sits on the bar of my father's bike. My father is also in the photo looking extremely young (my guess is about seventeen or eighteen) and dressed in a Sunday-best suit - or jacket anyway, and rather ill-fitting I note now. He is holding up the bike that my small cousin is perched on. My father has a carnation on his lapel, which leads me to believe that it is maybe a photo taken after the wedding of one of his older siblings.
"Who is that boy?" I remember asking, and more than once because I always liked the sound of the name.
"Jimmy Joe," Mum or Dad would answer. Jimmy Joe ... Jimmy Joe ... I'd run the name around in my mind, wondering where or what 'Jimmy Joe' was doing now, twenty or more years on from when the photo was taken. How was I to know that in another forty years I would find out?

And so, back to the present - I emailed back to this cousin who had suddenly appeared out of the blue. (I can't help wondering what my father, who died way back in 1968, would have made of all this on-line journalling, websites and emailing business; let alone communicating by web cam.)
- Are you Jimmy Joe? I emailed back.
- Yes, I am indeed, was the reply.
We have since shared memories. Jimmy Joe (I'm sure he doesn't mind me calling him that, although of course he isn't known by that name now) in particular has given me precious insight on my father as a young man. He remembers times on the McKenzie family farm in Orepuki and my father (his Uncle Don) mercilessly teasing him and taking him for wild tractor rides through the bush and down steep gullies.

Now cut to even more recent times. Just last week in fact, when yet another crazy co-incidence happens with this same cousin. (I am beginning to think that my father is having a little fun at our expense. I can almost hear him chuckling.)
And it has to do with this book cover on this post about the anthology, 'Swings and Roundabouts' which has a poem of mine in it. There I noted that the photo on the front cover 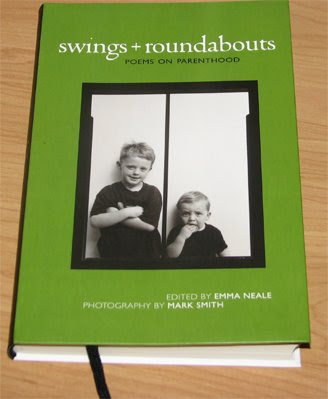 could almost be of our two sons ... Allow me to elaborate a little: the expressions and likenesses the photographer Mark Smith had captured (and here I have taken the liberty of some cut and paste with the photo, and hope Mark doesn't mind ...) 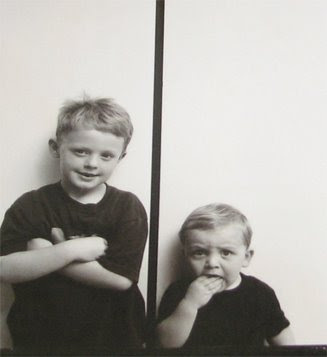 kept arresting me ... I was for ever transposing the faces of my two oldest boys (when they were at about the same age) on to the faces of the boys on the cover.
(And looking now more closely at the photo close-up, I see that the older boy could be a double for my brother's son at that age.) 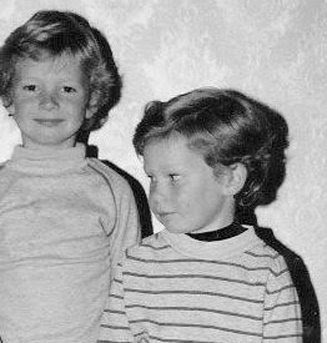 Well ... when Jimmy Joe read the post, and saw the photo on the book's cover, he (and I quote from his email) 'just about fell out of my chair.' The book (which he didn't know anything about before my post) had featured on its front cover, his two grandsons! (Or put another way; my sons' third cousins.)

I've a feeling that that sort of thing could only happen in a small country like New Zealand.

It did make me smile but also made me wonder about my McKenzie family ties to Southland. I've wondered about that before though, haven't I? I can't remember if we decided anything was possible.

My mum's mum was a McKenzie ... a big farming family down south. As for fruitpuffs ... I had forgotten about fruit puffs. I drooled my way through it.

Well the things I have to learn by reading your posts :)

Would kind of make you sit up and take note wouldn't it to see your family on a book cover and never know it was there?? How did they get the photo in the first place?!?!?

Yes, definitely a New Zealand story. And I am looking at Di's comment and wondering if we are related, because my greataunt married a McKenzie from the Invercargill area and I have lots and lots of McKenzie second and third cousins - a "big farming family down south".
Now, I think these two boys are actually your sons' second cousins once removed. If they are your first cousins's grandsons, then their parents are your son's second cousins , and they would be third cousins to your son's children.
There is always a "removed" if there is a difference in generations (spoken as a crazy keen genealogist)

It's a small world after all - especially now we have the world wide web. Whatever did we do before it came along?

Great story by the way.

That is just uncanny.
Wow!

It happens in small-ish towns, kind of... but not quite like what happened with you.

Weird! Next thing is you will be receiving answers from elsewhere by table rapping!