Southland's Dan Davin Literary Foundation is the heartbeat of Southland's literary arts. This month the members, in conjunction with the Invercargill Library, took part in organising an arts festival in Invercargill, and invited writers from Dunedin to take part. The invited poets (yours truly among them) duly headed south last weekend. Invercargill, has clean, wide streets, an informal, friendly atmosphere and is famous for its 'Bank Corner' where polar winds blow in straight from a wild Southern Ocean to knock over little old ladies and turn umbrellas inside out and back the right way again. A re-visit for me is always a trip home; Southland being my old stamping/stomping ground. These days it's looking just as tidy as it ever was, but maybe even more spruced up, and with a quiet pride perhaps best epitomised in the concrete, sculpture of an umbrella which also doubles as a sundial

and celebrates both Invercargill's light (the longest twilights in New Zealand) and of course its famous, green-paddock-inducing rain.

***
ABM and I had the pleasure of Emma Neale as a travelling companion. We stopped for a coffee and some lunch in Gore (where I was amused to note that what we would call paninis, are known there as toasties. No pretensions that side of the Clutha River) when lo and behold! some of the other poets also taking part blew in the door - Jenny Powell, Jeanne Bernhardt and David Howard and his partner E. It was so good to see them all - even if the context of Main Street Gore felt a little strange.
A benefit of writers getting together for festivals and the like, is the chat that goes on. As we sat over coffees and burbled on, J said it was important to celebrate where you're at and not fret over whether or not you are writing. Even if it takes two years to write again, so friggin' what? I needed to hear that. I could've turned around right there and then, completely happy in the knowledge that I'd heard all I needed to hear for the weekend.

After booking ourselves in at the arts-fostering apartment hotel 'Living Space' where we were all generously provided with a free room for the night, we made our way to the library with the other three invited poets, Peter Olds, Richard Reeve and Michael Harlow. At the library we listened to Southland poets reading their poetry. This was a real treat. Following this were tributes to Ruth Dallas, a noted NZ poet who was born in Invercargill and who died earlier in the year.
A hearty nosh at the Speight's Bar that night was followed by us doing our thing at a poetry reading, and the next morning the panel. Among other things, we discussed which poets we felt were inspirations for us; the state of poetry in the south; is there a southern voice? ... I guess the question about the state of poetry in the south; which included comparing south to north; provided the most reaction / response. (Some of us also at that point just realised that it was all being video-ed - oops!)
As J pointed out (from the audience) isn't it better to be free to be ourselves, to keep flying under the radar, rather than have all the exposure, with attached expectations, that the more northern lights 'enjoy'? (A little like being Indie poets I guess ... ) There was a lot more said, but I'll leave it at that - except to say I believe I can speak for all of us writers from the south and state that southern pride is alive and well. Anyway, isn't it part of being a writer to belong to some 'school'? East v West in America; Canterbury v Oxford in the UK? etc. etc. We poets can be a tricky, sensitive lot. Maybe defining our patch keeps us on edge and alert - which in turn keeps our writing vital.

***
Richard's third collection, 'Incontinents', was launched after the panel. Emma launched the book with a pertinent, insightful introduction. Richard's writing is awesome, and I do not use that term lightly. I am in total awe of his ability as a wordsmith.
Sunday afternoon I was side-kick for Cilla's poetry workshop, and again it was a pleasure to hear the southern voice coming through the writing, and to help spark some ideas as to how they can develop their writing and their voice. Cilla was just back from Dunedin after receiving an honorary doctorate from Otago University. Congratulations to another one of New Zealand's very best poets.
It was a great weekend, I felt privileged to have been a small part of it.

This will be the fastest blog post in the west if it works! I do it just before I dash to work in the rain, under a red umbrella.

The weekend in Invercargill at the Readers and Writers Alive! festival was fantastic. More about it perhaps when I have more time ... 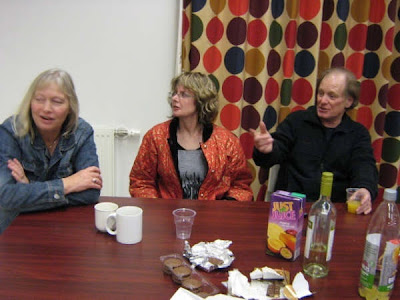 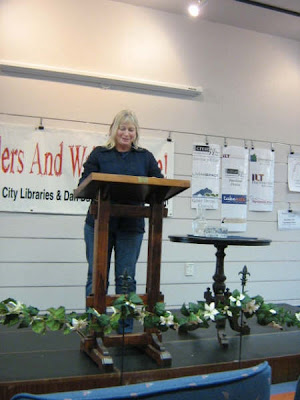 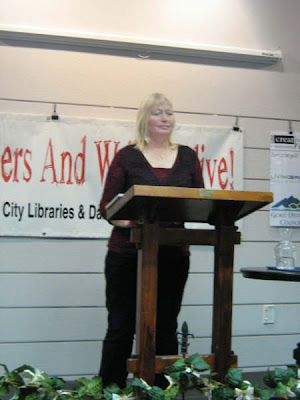 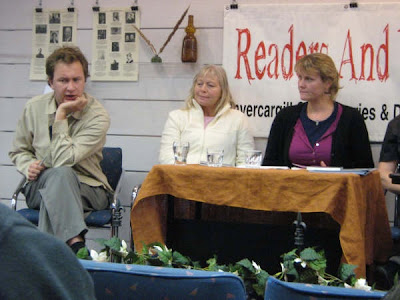 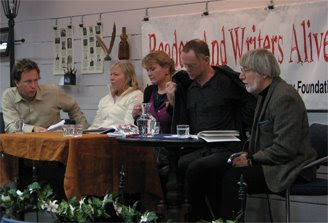 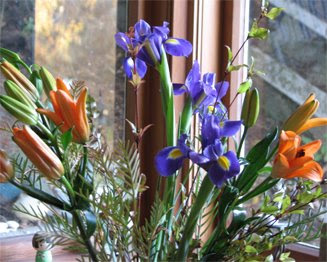 Flowers received from S&E in Japan.
I have had a pleasant day at M&K's. They cooked us a pork roast meal with pineapple and roast vegetables. Mmmm ... just the thing on a cold, dank day like today. I received flowers too from my daughter R. Just waiting now for a phone call from C in Haast. Meanwhile ... soup and toast and a blazing fire.

A giant squid (although colossal is apparently the more correct description) has been de-frosted at New Zealand's Te Papa Museum in Wellington. It stinks too, according to Steve O'Shea, a world expert on these creatures of the deep. You'll find more about the squid here.
Also there is footage from the live cam (the last few hours of a very long process.) And facts (on weight etc.) here.
The reason why it needed to be defrosted is because last year when it turned up in a trawler's net, Te Papa Museum refurbishments meant there was no space for them to prepare it for preservation, and so it had to be frozen until the refurbishments were finished.
The really, really, giant colossal squid; which experts believe could be hovering deep in oceanic canyons down near the Antarctic; have yet to be brought to the surface, or even witnessed. Steve O'Shea has long been on this creature's trail.
I met Steve and co-researcher Kat Bolstad about six years ago now, during an Arts Festival in Stewart Island. Their knowledge and passion for giant squid is impressive - and always served with large doses of humour and fun. I found them great company; they are downright likeable, level headed people. (I have a soft spot for level headed people.) I mean, what could be more down-to-earth and unpretentious than a world-renowned expert on giant squid who is a huge fan of Neil Diamond?
I was in Stewart Island for a Natural Science Writing Festival organised and run by Michael Tobias and Jane Gray Morrison of the Dancing Star Foundation. Their warmth and generosity helped make it a wonderful trip of which I have vivid, lasting memories.

In the corner of the pub that looks out
on to the harbour at night,
masts of boats drift; dark crosses

hanging in a mist
that annoys the oyster fishermen.
At this table microbiologists

and makers of nature-films
drink beer in the din of Stewart Island
locals and a juke box, and talk

about the intricacies and intrigues
of giant squid, their small brain,
their looks - ghostly, ugly

(yet it could be argued,
mesmeric, mysterious). Of tigers
in the snow in Siberia.

Of how many Type-A scientists
there are. Of the detective work
of research. Of the raw tenderness

of raped oceans - straits dredged,
raked, scraped clean of aeons of coral.
Steve goes out for a smoke. Jane tells us

about her macaw back home
in Santa Monica; how to wake her up
it picks and pings her sleep-mask.