What I saw Out the Window Today

It was a good day at work today. 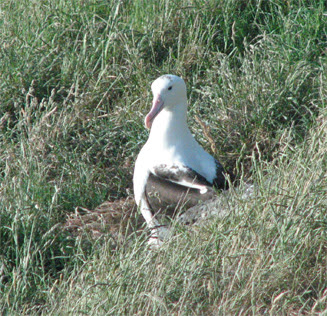 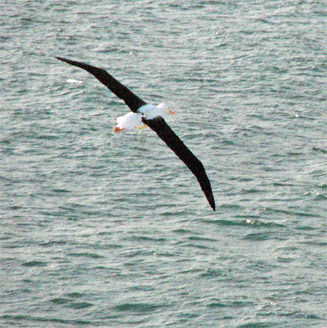 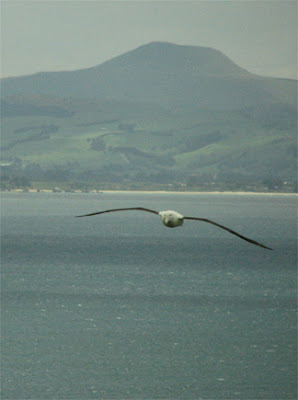 Northern Royal Albatross.
There were some awesome flying displays today from the younger birds who have come back to the colony to find a mate. For the Northern Royals, this takes four or five years of yearly visits back to the colony where they were reared. As they have already spent four or five years out at sea before this, they are about ten years old before they actually breed.
The first time they touch land after fledging is when they return to look for a mate. These younger birds are known as 'the teenagers'. They like to party, socialise and show off. As a general rule, the Northern Royal albatrosses mate for life. Barring accidental death or mishap, the Northern Royals can live for thirty or forty years. The oldest bird, known as Grandma, lived to be over sixty years old.
Her last chick, Buttons, had a chick called Toroa (the Maori name for albatross), who was the 500th chick hatched at the colony. He and two other 2007 fledglings were fitted with GPS units so that their circumpolar journeys can be followed. You can go here to see where they have got to so far.
- November 27, 2007

Aflight they are quite majestic.

--talk about a Dream Job!

This is really amazing! Jacob and I traced the bird's flight from NZ to So America and back. He was as amazed as I am. He made up a song about flying.

What an amazing journey. I am so in awe of these magnificent wanderers.

I want your job!

mapi - Like all jobs, it has its moments! (Good and bad.)

professor j - Thanks for your visit.

marie - It is a pretty cool job.

shameless -Yes you recognised the spiel did you? ;)

They are quite stunning, despite the negative associations from literature. Wonderful photos!

pp - Yes they got some bad press century before last didn't they? Coleridge's fault.