Royal Spoonbill - a poem and a photo 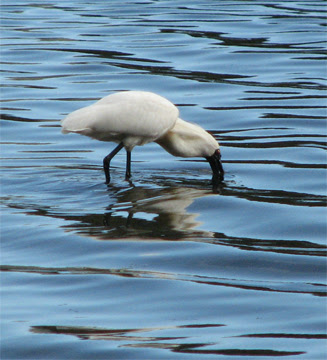 Like old people
trying to read a newspaper
through a magnifying glass,
two round-shouldered spoonbills
scan the mud,
knee-deep, with feathers
as white as snow
-covered tussock and black
-rivet eyes imprisoned
behind soup-ladle bills
the colour of pewter.

*** The poem I wrote a couple of years ago. It is a poem that doesn't go anywhere, but nevertheless describes the Royal Spoonbill fairly accurately, so I guess it still has its place and one day, you never know, I may write a book of bird poems which this will fit into very nicely. Meanwhile ... it can sit here.

*** The photo I took on my way to work this morning. A rather hurried shot and one which doesn't do justice to the interesting spoon-shaped (or, soup-ladle shaped) bill this bird has. A wading bird, it finds its food on the edges of the harbour. It has a crest as well which I wasn't able to capture as it was too busy foraging to lift its head. Besides, I was running (or I should say walking!) late and couldn't afford to hang about waiting for it to lift its head.
Another interesting fact about this bird is that it has just started nesting on the Peninsula here in Dunedin in the past five years.
- November 22, 2007

I don't think I've ever seen a royal spoonbill, unless it was in Australia years and years ago. As far as I know there aren't any in Christchurch

The picture may not do justice to the bird's bill, but it is a nice picture. I like the lines of the waves and the bird's reflection.

I've only been familiar with the Roseate Spoonbill which is common in Florida and the Caribbean. Same soup-ladle bill, but it's feathers turn pink, I'm presuming because of its diet, just like the effect of the flamingo's diet.

What beauty, what peace. I love the different ways you find to share so much with all of us.

We celebrate our day of Thanksgiving here today. Thank you for a growing friendship of a few years now.
--mp

I'd love to see a collection of your bird poems - you could even illustrate it yourself with your own wonderful photography. I love the light in your pictures - so clear and bright.

Spoonbills are very rare in Sweden. I have only seen one in my travels, last year in early spring in Skåne, at the southern tip of the country. I have a picture of it standing on one leg (which always makes me laugh) here. This one is Platalea leucorodia according to my bird book.

What a spectacular bird...cool name. I really enjoy your poems, Chief Biscuit. Thanks for sharing as always.

A Royal Spoonbill is a wonderful thing to see on your way to work! It's much better than a traffic jam. ;)

Such a great photo! It's incredible the sights you see to and from work. Thank you for sharing them with us.

catherine - They are recent immigrants.

cam - That's so interesting - thanks. So it's a bit like the flamingo. I wonder if I threw something pink into the water, our ones would turn pink too. Not that I would of course!

mapi- Thank you so much - I too value your friendship and give thanks. Have a great holiday weekend and enjoy some great family times.

marie - That link works so well - thanks for that - great picture - so many birds in one shot! I enjoy your accounts of birds too.

mrs g - Thanks for your encouraging visit again - as always!

shameless - Yes I must give it some thought - thanks for your support!

pp - I actually love having an appreciative audience who cares! So thanks is due to you too!