For all those who inquired, a 'flat white' is a coffee made with hot milk slightly fluffed-up i.e. not as fluffed up as much as a cappucino.
Now I hope you all know what a cappucino coffee is? In case you don't, it's a real fluffy, milky coffee with loads of froth; in fact I'd go so far as to say it is all froth.

I take my camera* to work with me every day. Today on the way home I was feeling surprisingly carefree and observant.

* The camera - a Canon - was given to me by my sister Mcdinzie - partner of Dinzie - when she bought herself a bigger camera. Every time I take a photo, I thank God for the kindness of little sisters. 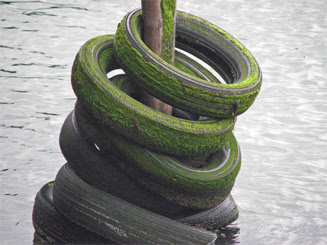 For example, I noticed these tyres used as a boat's 'hitching post' (I wonder if there's a nautical term for it? If there is, K&J or Marie are sure to know what it is.) 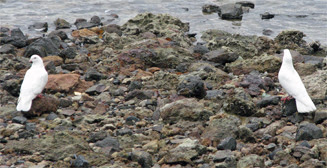 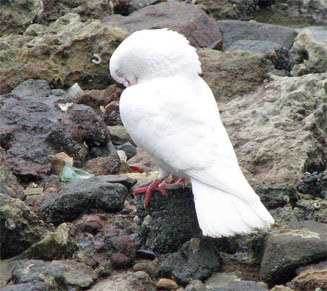 These white doves for some strange reason were standing at the water's edge as if pondering ... I wondered if they were lost? I am hoping that the homing instinct kicked in eventually and they got back home all right. 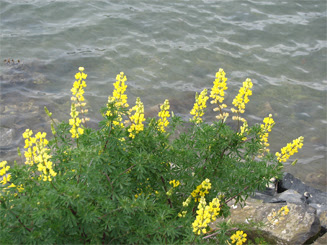 The wild lupins seemed especially appealing tonight. Maybe because, like lanterns, they provided a stippled light against the grey water. 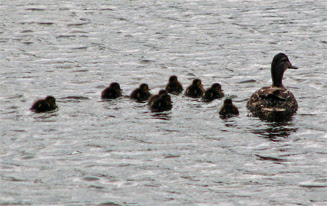 And then I couldn't resist stopping again to take a photo of this mother duck and her paddling little ducklings. At this stage there were eight. After taking the photo, two more came bustling up to join the brood.

My American Sentence for today comes courtesy of a man I work with who hails from Yorkshire. He and his family moved over here about a year ago and bought a house with a bathroom that's got a shower, but no bath.

I can't be having with just showers; I'm dying for a good, hot bath.

(Imagine it being said in a seasoned Yorkshire accent, with the emphasis on 'th' in the word 'bath'.)

That looks like a mooring pole, chief. And I agree with you - what a kind sister you have. You have certainly gained enormously from her gift.

I love those little ducklings! It's such a sign of spring to see them around, all fluffy and precious.

Terrific photos - I especially like the white doves. And your American sentence is terrific (although the thing about American sentence seems to me that Ginsberg just took the Japanese Haiku and gave it an American twist) and I can imagine the guy's Yorkshire accent (having recently been to Yorkshire). :)

So wouldn't you think they'd buy a house with a bath in it? The dove reminded me of England. the whole countryside seemed to be cooing with doves there.

You just never run out of bird action over there do you. I've never seen white doves that weren't part of a magician act. Very pretty. I look forward to your American sentences each day.

ah...a nice hot bath...I would kill for that right now, but oh, the time??? I've got the Crud that seems to be hitting everyone in the Northern Hemisphere right now, and rather hard. Ick. 3 days to get over it before Mom shows up...she's not the nurse-type! I loved the duckies. I have a soft spot in my heart reserved just for duckies! :)

The Mooring post - I think the tyres re to stop the damage to the boat ...??

The only bad thing about you getting the camera is how good your photo's are :O) The competion is hotting up as the months go by :O)

nice duckies!!!!! It was nice to have a visit by the camera awhile back but its definately your camera now :) Loving your piccies. Canon have a competition...will send you the details

marie - Thank heaven for little sisters! And yes, ducklings are just too cute.

pp - Thanks - you're right about the AS and haiku - my thoughts precisely.

Catherine - I believe he's about to re-furbish the bathroom and put in a bath!

mrs g - Thanks. There is a lot of bird action around the peninsula and harbour. It's better than tv!

dinzie - I think you and McD have the better of me, photography-wise, by a far chalk.

It's like trying to explain to the French what a latté is ... which I love. And many people think it's French! Here the closest equivalent is un grand creme.

Shameless - You're right - a latte is a very nice drink.