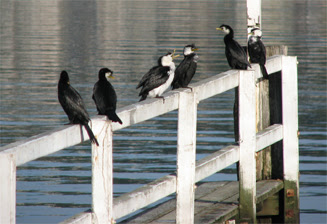 Stewart Island shags having a bit of a goss session.

I've gone a bit crazy with all this time on my hands ... and registered for both NaNoWriMo and NaBloWriMo. This means that I have accepted the challenge to write a novel in a month as well as a daily blog-entry. As I said, I must be crazy. 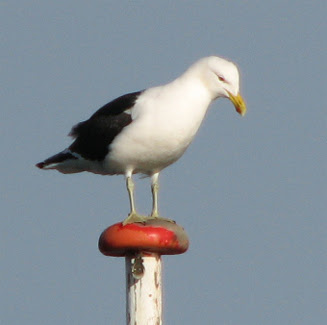 I'm all trained up at the Albatross Centre and ready to go. Bring it on! All that's needed now is for the albatross parents to lay their eggs and settle down for the long incubation period. The observatory is actually closed at the moment so that the birds can settle down undisturbed. Did you know that albatross (in the main) mate for life, and that both parents share the incubation and rearing of the chick?
The Observatory will be opened again to visitors in late November, once all the eggs have been laid. Albatross Centre staff can then take people through and stun them with interesting facts and background info. on this amazing seabird.

Meanwhile ... I must not fret about not earning much money until that time.

An interesting thing going on at the Centre (and one which can be followed on the website ) is the attachment of satellite transmitters to three fledglings. The transmitters are fixed to the back feathers so that their movements at sea can be followed. The trio includes Toroa, the 500th chick hatched in the colony's 70-year breeding history.
When the young birds leave Taiaroa Head, and providing they survive long-line fishing lines and other dangers and toils, they do not touch land again for about four or five years, when they return to their land of birth and begin to search for a mate. This 'teenage' stage, when they socialise and generally 'look around', takes about three or four years as well. 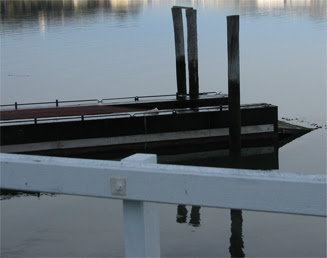 morning shadows on the harbour

As today is not a workday, I plan get some of my NaNoWriMo novel outline done. Plus write a poem or two. I also want to send some of my recent poems out to various newspapers and magazines.
What I intend to do with the novel material, is re-draft what I started last November. I expect to end up with some more new stuff added to old. I hope also by this process to get some momentum going. The biggest challenge right now is to figure out the p.o.v. First person or third? Or maybe even (keeping it topical) bird's eye view?
- October 26, 2007

There are a few of my blog-reads that are participating in NaNoWriMo. I feel like I am missing the bandwagon. I only have 11...no, wait, 12...pages on what has been in my mind for years. Perhaps it is just not yet my time. I applaud you- and if you are indeed crazy, welcome to my club! :)

I'm expecting a front row position when we visit so I can get some prime pictures :O) Lats tiem I was pushed to the back by the mad rush of tourists :O)

It's probably a good thing it wasn't a work day, I hear it was very windy at Taiaroa Head today (windier than gale force, even!)
I'm definitely not doing NaNoWriMo, still trying to decide about NaBloPoMo (and trying not to get too grumpy about the "National" part of the title - when will the Americans figure out "international"?)

Wow, good luck with the novel writing! I look forward to the albatross story unfolding.

A novel about an albatross, now there's an idea - a sort of Old Man and the Sea based on an albatross migration pattern, a different person in each place -wouldn't that be cool?

That's an exciting proposition and hopefully it will work out.
What Ive learned about you via your brilliant blog, I think there's every chance it will. Great stuff, CB!

All the best with ur novel! :) about the pov bit, have u read orhan pamuk's my name is red? The narrative was very interesting. Also in five people u meet in heaven by albom. Very different. Experiments are really working.

mapi - I know someone who wrote a technical text and then went on to write a novel ... so you never know! ;)

dinzie - I will book you a perch1

catherine - They have some Sub-Antarctic-like winds out on the Head all right; I daresay I can't dodge them all the time ... :) Yes our dear American friends do tend to forget the International word - InterNaNoWriMo? How hard would it be?

Apprentice - You are a genius - that would indeed make a great story - and I'm sure my novel will have an albatross in it - but the novel may not range as far as these birds do!

Jan - Faith such as yours is to be admired! I hope I don't dash it to pieces ;)

puresunshine - I have read OP's black book and loved it - maybe I should take a look at the red one. I liked the review of the Albom one in your blog.

Sending lots of wishes for success your way! You have my admiration for your courage and I am going to look forward to reading your books?

These photos are wonderful!

I really admire anyone that takes on that NaNoWriMo writing challenge - how on earth do you find time with such a busy schedule? Still, you write so well that I'm sure you will succeed. Good luck!

And those bird pictures are fantastic. I've become very interested in observing my natural world, partly inspired by posts and observations from people like you.

Cb,
I've never been to a poetry reading, sad to say. There must be one in this area on occassion, since there are four institutions of higher learning within a 50 mile radius.

I've contemplated joining up for NaNoWriMo but we'll be away for the last two weeks of Nov. Still and all, I feel a novel in me with Elodie and Jacques, and maybe, even if I don't finish, i'll get a healthy start.

I tried NaNoWriMo a few years ago and realized I'm not ready to write a novel. But I am signed up for NaBloWriMo, so I hope good things come out of our efforts in November.

Eeks, I admire your stamina! Not sure I could do all that. Good luck and we'll be reading! :-)

marie - I am so inspired by your blog - I am going to give you a shout - more people that I know should be reading it - your photos and descriptions of birds (and of sailing) there in Sweden are just wonderful.

january - great! I'll be reading and trying to keep up!

shameless - Eeek! Indeed! What have I done?!

Wow! Good luck on both! I can't imagine finding the time to blog daily and do NaNo!

My FauxNo isn't doing so well. I am having to make a lot of changes to the original, so I may not be able to do another 50K words by the end of the month. But at least it will be a little more progress!