Poetry readings have started up in Dunedin once again. The first of this new season was held on Wednesday at the 'Circadian Rhythm' restaurant.
Richard Reeve was compere. There were nine readers for the open mike sessions, which allowed for an interesting assortment. For me the most memorable readers from the Open Mike parts of the evening were Ann Jacobsen and Peter Olds.
Ann's poems leapt out at me, fresh and raw as if still stinging from the harsh sunshine on her family's Miller's Flat orchard.
Peter's were typically wry and astute - for example, 'The Elephant', with its striking descriptions, such as the one of large elephant droppings mixed with straw, 'looking like something you could eat'.
Donelle Karagedikli was the featured poet. She has the stunned look of someone who has recently moved to Dunedin from Auckland! (I jest.) Donelle is Publicist for University of Otago Press and has an engaging freshness and vitality that I'm sure partly comes from having lived in a larger, more tropical city. I hope she stays for some time, and isn't too put off by Dunedin's cold winter.
Donelles' fine poems hold the flavour of the North - Auckland in particular. Her poetry is characterised by subtle descriptions of paintings, buildings and relationships. The poems have a sophisticated timbre and are light on the ear. After hearing them, I would now like to read them.
The University-linked Dunedin Readings have had various life-forms over the last ten years. This Wednesday's event could almost be described as slick. It started at seven-thirty - unheard of in student circles! (What's more, it started pretty much on time.) It finished (at what seemed indecently early) about nine o'clock. I suspect I am harking back to the nature of the other readings, with their wild weirdnesses and oft-times bizarre rantings. In comparison, Wednesday night was very civilised.

ABM went up to Christchurch on Wednesday to see Bob Dyan performing. Bob gave his money's worth. (And that's saying something, because the tickets weren't cheap.) ABM said that the taciturn Dylan growled rather than sang, and the songs were given a loud, rock-y treatment. The words were hard to make out. Not that the aficionados were fazed. They know every word anyway. He played a Hammond organ. (According to an article in this week's Listener, written by Andrew McCallum, this is for health reasons.) I have yet to check with ABM whether Dylan and the band wore the Western-style (as in the 'Old West'-ern style) outfits, as described in the same article. ABM said he sang 'All Along The Watchtower', but didn't sing 'Blowin' In The Wind'. Dylan at 66 could safely be described as driven. Not only does he still write and record quality songs, but he hosts a radio programme, has published part of, and is still writing, his memoirs, and has acted in and produced a film. On top of all that, he is perpetually touring in this so-called Never Ending Concert. (The Christchurch Concert was the 1,966th concert.) The man has got to be a legend! And testament to his status as a legend, is the fact that the three concerts he is performing in New Zealand, were all sold out in three days, with minimal advertising.
I was happy to stay at home. I have never been a great fan of Bob Dylan. But that's not to say I do not acknowledge his genius.
If it had been Joni Mitchell, you wouldn't have been able to keep me away. She is another singer who was never going to be content to remain in the 'Folk Singer of the Sixties' box. She has kept writing (and brilliantly) new material, and in a sense, re-creating her style. But not many people know that. They hear Joni Mitchell and think 'Both Sides Now' or 'Chelsea Morning' and not 'Magdalene Laundries' or 'Hejira'. They are the ones missing out. Over the last forty years or so, Joni has written some strong songs with brilliant lyrics. She is due to release a new cd, called 'Shine', on September 24th. I must go and put my order in.
However, there will be no Joni concert for me to attend. Not that she does much in the way of touring - and I doubt if NZ would ever have been on her agenda anyway.
ABM was also able to see the artist Bill Hammond's exhibition on at the Christchurch City Art Gallery. He said it was stunning. We are both going to be able to view the paintings when we go up to Christchurch for a night in a couple of weeks. I'm looking forward to that.

My tentative plan to get up early and go for walks before breakfast didn't eventuate. Why did I ever think it would? However, I find that I can now organise myself enough to go for a walk before the evening meal. 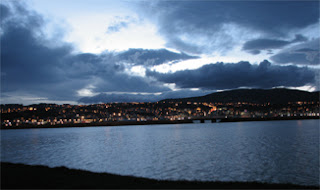 Tonight as darkness fell, and the lights of the city began to glow like embers on a heap of black soot, it was freakily warm. An over-active nor'wester chopped up the inlet. The water in the gathering gloom sounded like a thousand fish smacking their lips.

Bob Dylan...wow! I didn't know he was still doing his thing.

Poetry readings are so fun!

Thanks for the thoughtful email.

Oh you lured me back with your comment, and what do I find but a beautifully recognisable description of Dunedin's weather :)

What a lovely post. Glad the local poetry reading are starting again.

And I'm not a Dylan fan either but his talent is undeniable.

tammy - I know - he just keeps on going just like a true legend does.

january - Thanks - glad you enjoyed.

Wonderful photos and of course, as always... excellent words.

You have a way of shining light in so many new places, I love that.

Great pictures ...Shows that sunsets and sunrises don't have to be all shadees of red ....

Does look cold though :O)

Hope the gales didn't blow you away ..