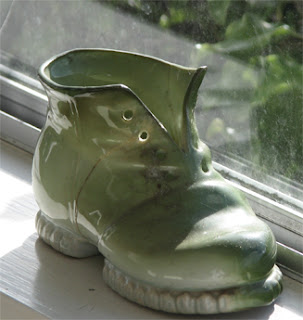 This boot is one of many knick-knacks we inherited from ABM's great-aunt Phyllis. My Nana also had one of these ornaments. They were popular in the 1940s and '50s. Is it a kind of elevation of the common man? The working boot, evoking blood, sweat and tears and a job well done at the end of the day. A drain dug. A road mended. A track cleared.

Speaking of tracks cleared, this morning we farewelled C our youngest son who is off to take up his position as an 'Official Track Clear-er' for DOC. This time I believe it will be a long time until (if ever) he needs to come 'back home' to roost. This time he has got himself a permanent job (other times the work has been seasonal.)
As I washed the bedding and towels and cleaned out his room, I felt it sinking in more and more: ABM and I have the place to ourselves again. ABM said that the expectation of imminent return has its own presence, and it is a weird feeling when it's absent. I agree. When someone is living with you, even if you don't see them much (C was often out for long periods of time) there was always the expectation that he was coming back for meals, to sleep, to do his laundry, to sit and watch TV with us, play his music, catch up on his emails, have a shower etc. Now even that has gone, leaving us with JUST US. A nice feeling, yet a strange one. It'll take me a week or two ...

***
C said it's whitebaiting season, and therefore the busy season in the West Coast town where he's headed. In the supermarket the other day an older woman in the queue behind me had a packet of frozen whitebait in her basket. She couldn't resist telling me how it seemed a shame she had to resort to buying frozen whitebait, as she remembered when she was younger catching it fresh and cooking it up into patties, and how scrumptious it was. "It's not the same at all," she said ruefully. I couldn't think of anything to say that was appropriate, wise or witty. In the end, "At least you have your memories," was all I could come up with. Duh. 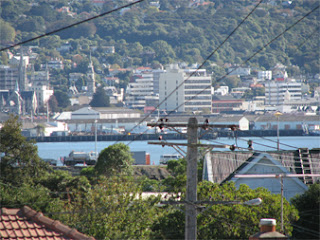 We have been invited round for dinner with friends tonight, and we're bringing dessert. As usual I was stuck for brilliant ideas. Not being into cooking, it's always a major dilemma. I often end up going to the supermarket and delving into the freezer to find something expensive and different.
If I was into living up to the expectation of all upper middle-class-ers - listening to Kim Hill and hearing about how to make an Auckland dessert; something that doesn't involve crystallized cherries or angelica, something with white chocolate, raspberries or schnapps, something called baklava, New York Cheesecake or Cranberry Hootycreeks; maybe then I could really impress.
But there's too much of the Southland girl in me for that. (At the hint of anything pretentious, I can always hear my father's voice growling, 'Lah-di-dah.')
In the end I've used a tried and true, 70s recipe. The old chocolate chip log. Chocolate chip biscuits dunked in sherry and then, using whipped cream, pressed together into a log. Simple, homely and able to be made quickly if you're armed like I am with my mother's Southland elbows.

Your chocolate chip log sounds pretty damned delicious to me - can I come to tea?
(What's DOC?)

Yummy! Yummy! I'm currently studying Samuel Beckett's 'Waiting for Godot' where an old tramp has trouble with his boots. Well, there's not much else happens. In the DVD version I have the boots are very like the one in your photograph. The play was written in the late forties.

Michael and I will have to get used to just the two of us in 4 short years...It will be the first time we will ever be sans children..It must feel freeing and lonely at the same time.

Dessert should just be yummy, and made with love. Your's sounds perfect.

If I had more time, I could sit on the riverbank at the end of my street with my whitebait net - though the catch doesn't seem to be very large there, maybe enough for one patty.
We're not sans children yet, but at least they are big enough to leave at home while we travel. My youngest was shocked when I told him I was married at his age (20)

CB,
Your Book arrived in short order thanks to Donelle. Thanks for the fitting inscription! I am enjoying your talents.
The empty nest has advantages to be sure, but it comes with a different set of challenges too.

Sometimes the distractions afforded us by offspring in the house are a blessing. ;-)
rel

There is something terribly homely and down to earth about those boots! And dessert sounds yummy.

I got used to it just being us really fast as I ran naked through the house (if only in my mind). lol

Dave made his first peach and pecan pie this weekend...Woohoo! Can you email me your receipe while he is on a roll.

Those boots are too cute! My parents are alllmost done as well, and I think they're enjoying it, but they have NEVER (not once in 28+ years) lived with just each other...I keep wondering what they'll do!

'the expectation of imminent return has its own presence...'
Having just waved goodbye to my Brother and his family at the airport, that line rings so very true.

A fav. dessert here too:)

love those wicked 70's concoctions...they often taste alot better than when you muck around with a fancy-assed recipe from the newspaper trying to impress!

I like the sound of your father, CB. Personally, I always say "lah-dee-freakin'-dah." It feels so good.

thanks for the package it arrived today. book looks great! im enjoying that dessert, albeit vicariously through a blog. weird.

I wonder if anyone bronzes baby shoes anymore?

So often I want to pass on the baklava and ask for a scoop of vanilla and three strawberries. A plastic bowl is fine, thanks.

Avus - of course you know you're welcome at any time! DOC is Dept of Conservation - that's c-o-n-s-e-r-v-a-t-i-on not Conversation!

carole - Oh yes I remember that play - studying it at Teacher's College in the 70s. At the time I thought it the most boring, pointless play ... I wonder if I'd think the same now? (Probably!!)

wendy - That's a good description. Luckily M and his wife K are not far away - and my daughter and granddaughter too, of course. But the house seems pretty darn quiet all the same.

catherine - Yes it seems strange to think we had or oldest son at the age he is now!
Even one whitebait patty might be enough incentive to go off with a net!

rel - Neat! Glad you got the book so quickly. I am so pleased.

kamsin - The boot is rather cute.
And the dessert WAS yummy.

The recipe is as I described. Do you have chocolate chip cookies over there? About fifteen of them dunked in sherry and pressed together with whipped cream into a log shape - and then once all lined up, smothered with the rest of the whipped cream. Decorate the top any way you like. Put into the fridge for at least an hour - voila!

herhimnbryn - It must've been a tug to say 'bye to your brother ...

becky - I think Dad would've smiled at that saying of yours!

kumonkey - It's interesting the crazy ways to communicate these days! Glad you got the parcel. Enjoy.

Waiting For Godot - boring and pointless - I thought that was the point ;)
Did you know that 70s deserts are back in fashion in a big way? My creed regarding deserts has always been to use chocolate, in whatever combination - you just can't go wrong! My favourite desert is one I have to go to Kerry for - in a pub called Stoker's Lodge; they do a mean dark and white chocolate baked cheesecake - divine!

cailleach - i just about added to the comment - 'or maybe that's the point.'
That cheesecake sounds divine - that does it. I have an appointment in Kerry 2010 (when ABM and I are planning a trip to the UK and Ireland!)