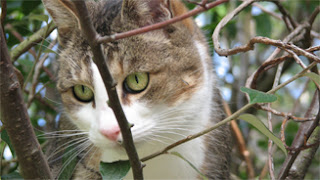 Mondays are always a little fraught. That familiar draggy feeling hits about 7.00pm Sunday when I realise that the weekend is coming to an end, and it's back to work again in the morning. 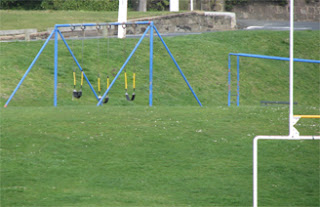 This morning started out frosty. Using a jug of hot water, ABM de-frosted the back window of my car (which is not the car in the photo below!) I arrived at work having had no breakfast, so made a cup of tea and munched on a muesli bar. It took until about 9.00 (an hour after arriving) for me to start feeling halfway normal and in the mood to be social. 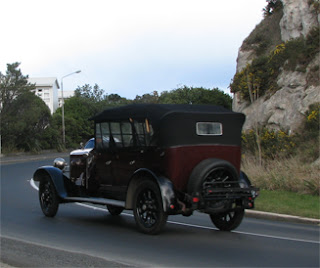 (On my walk yesterday afternoon, a line of vintage cars unexpectedly rolled past me. I managed to take a photo of a few of them as they rounded the Shore Street corner.)

Today I got deliberately whacked on the shin by a four year old's clod-hopper boots, and later was scratched on the face by the same charming child. At those moments I just want to say,
"Stick your job." And walk out. But I don't. There are enough other sweeties who make it worth while. However, I am so over pre-schoolers. I believe I've got to the stage that the only ones I want to have anything to do with are my own future grandchildren. I am on the lookout for other work. Working with books in a library would be my first choice. 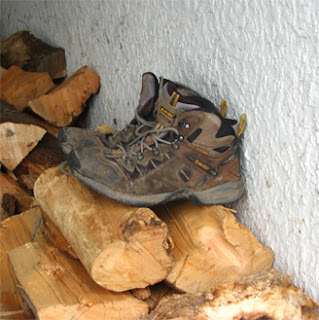 Speaking of new jobs, C is starting his at the end of the week. His boots will be picked up from the wood-pile and put to good use on the muddy bush tracks of South Westland. We will miss his lanky frame and good-natured presence. I managed to finish the jersey I was knitting him. It fits perfectly. I imagine it will be a well-worn jersey, ideal for the kind of outdoor work he's going to be doing. A Kiwi Brown, it's just the right colour for camoflague in the bush.

I am about to brave the cold depths of my Writing Room. I have had the heater there switched on for an hour now, so here's hoping it is warm enough. 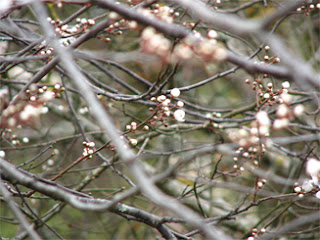 It's a cold night tonight. There is a feeling of snow in the air and Spring has retracted back into its shell.
- August 13, 2007

Yes, I spotted a good sprinkling of snow on the hills beyond Lyttelton Harbour as I was driving home. Still, we have daffodils and crocuses, so spring can't be far away.

Snow would be better than this **&^*&^ rain! We've officially and otherwise had the worst summer you could ever imagine in the Irish Northern Hemisphere. The kids are all edgy and I'm just hoping that we might have an Indian Septemner which would be nice - maybe not for them in school, but it would make autumn more, well, golden brown, the way it should be.

work can really get you down! sounds like you need a holiday in the sun in a child-free zone. keep your pecker up!

freezing....cold....brrrr....why would anyone ever consider going to Alexander to live....did you see the temp on the TV tongith :)

the temp has definately taken a dip into the darkside!!

love the piccies especially the cat :)Is it grommet?

catherine - There are signs of spring, which is lovely to see, but it cannot be denied that it is also cold!

cailleach - Got my fingers crossed for you to get your Indian summer.

rebecca - I just had a bad day ... :) Thanks for your encouragement!