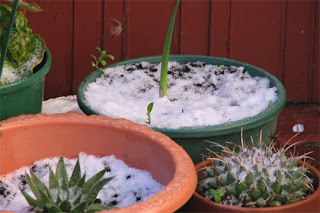 Monday, Tuesday, Wednesday, Thursday, Friday, Saturday ... Zoosh, woosh, zip, zam, bobble-bop, whee!
(Some onomatopoeia for the sound this week made as it rushed by.)
I spent all yesterday (bobble-bop) in bed fighting off a flu bug. I did have some company - Ian Rankin's D.I.C. John Rebus. A purely cerebral relationship, I assure you. I have now finished 'The Falls' - one of the three Rankin books I borrowed from F-i-L. I've now started on a second, called 'Black and Blue'. In this book Rankin has upped the ante. The seamier sides of Glasgow and Aberdeen, as well as Edinburgh, are given living colour as D.I.C. Rebus gets drawn into the criminal underbelly, and as his isolation and rebellion become more pronounced.
Apparantly Rankin's new book, soon to be launched, cannot be named and is being referred to as 'Rebus XX'. No doubt a publicity stunt to promote sales. The lines between a writer's credibility and a promoter's mis-placed enthusiasm becoming a little blurred?
In this week's NZSA newsletter it says that Rankin is soon to visit the North Island of New Zealand ... I wonder if he makes it down this way? Hopefully all the ice and snow will have gone by then. O yes indeedy. Ice and snow. We have had a 'polar blast' (as weather people are fond of calling it) and not just one, but two. Or is that three? I've lost count ... here's me trying to keep track, counting on gloved fingers. 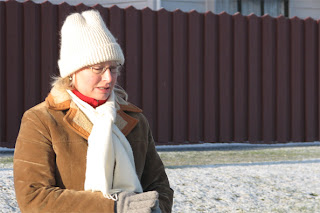 ABM and I went out this morning for a wee explore. We saw one or two cars ... of course the four-wheel drives with their grunt and brunt had to prove the point of their existence in a city. I bet once the owners saw the ice, they rubbed their hands in utter glee at the chance to brave the elements to go out and get a newspaper. There they were slipping and sliding and daring the icy roads. We saw a man and woman pull up outside their house and go in with two bags of groceries each - the woman wearing her dressing gown over tracksuit pants and ugg boots. (No, I couldn't work out why she would go out dressed like that either.) But most people were staying put. We were the only two in our neighbourhood mad enough to be out walking. Our feet made loud crunchy noises as we walked - so loud, I was afraid we might wake all the Saturday morning slumberers. 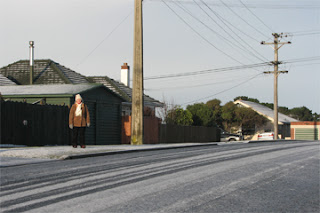 We are very glad our house backs on to a hill which gives us shelter from the southerly blasts.
C's car parked at the top of the drive, is adorned with a cap of ice. 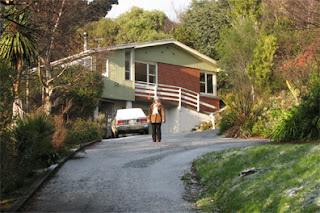 While the sun was still shining and the roads were melting just a little, we went out and bought a) a webcam and b) some wool because a) I want my sister, and my friend C in Britain, to see me when next I Skype them and b) I'm going to knit Son C a warm jersey for the winter job we all hope he is successful in attaining soon. The webcam works perfectly - except I find it's very off-putting as I'm used to seeing myself as a mirror-image, not as a dork.
While out, we saw two female shoppers wearing their pyjama pants ... Why? Your guess is as good as mine. Don't ask me why snowy, icy polar-blast weather brings this particular sleep-wear trait out in Dunedin citizens. Is it just in this part of the world? Or has this odd habit been noticed elsewhere - if so, please enlighten me.
I discovered that the wool shop - 'Knit World' - has moved and what was 'Knit World', is now a tattoo parlour! I bet I'm not the first middle-aged woman to scuttle in and then out again at a very rapid pace once the realisation hits!

***
After a long spell, I am beginning to feel my rusty poetical joints begin to squeak back into action again as I ready for NZ's Poetry Day, July 27th. I'm reading poetry on that day here in Dunedin. And all going well, my book 'made for weather' will be launched that day. The week before that, I've been invited to read poetry at a church, along with three other poets - Sue Wootton, Elizabeth Brooke-Carr and the minister of the church herself - Susan Jones. The church is in the Dunedin suburb with the funny name of Opoho. It makes me smile when I see 'OPOHO' written up on the front of the bus I sometimes catch. It's like the word is obsessing on the letter O. It is a word I would like to, one day, include in a poem. Imagine ending a poem with: 'Oh Po Ho'!

You didnt look like a dork!! oh no indeedy you didnt!!!

brrrr....looking very cold down your way....

Ice puddles...I remember them as a kid. Always wanting to be the first one to step into the puddle and break the ice oh yes indeedy very Oh Po Ho!

Hmm.
Wonderful reading this slice of your life, CB.
And the photos too.
Re the wearing of pyjamas (jimjams) in the day:
A Headmaster somewhere in the UK has Put His ( probably " brogued"??) Foot down.
He's banned mothers arriving at school with their kids fully dressed but themselves still in night stuff....this made me laugh. When my children were little, one woman regularly arrived ( late) wearing the most gorgeous of fur coats ( not real) over her pyjamas...she was the most glamorous thing imaginable ( and years on,still is!)

Oh po ho, in its worst possible connotation, was the first thing I thought of when I saw the name. In Diary of a Mad Black Woman, there is a very funny scene where the lead guy, dressed as an old lady, tells the bad woman to call the police--"Call the po-po, ho," and it caught on, at least with my friends. We're an odd lot, though.
b

I'm sitting here looking out on a bright sunny scene at 70 F. with a cool breeze blowing in off the river, and thinking how cold it is. Then CB shows me snow! :-)

Perhaps in the "wool" shop you could have a NZ woolly sheep tattooed on thy "hip".
rel

It's been cold in Christchurch, but no snow. So far the only thing I know of for Poetry Day here is at the university at lunchtime. That excludes those of us who work, or aren't academics. Maybe they think all poets are academics. Or maybe it's just that no one else has organised anything. How do I order a signed copy of your book?

Still can't get over the fact that it's so cold down there. Stay warm and feel better.

It feels so strange to see the snow pics and the ones of you all bundled up in your coat and hat when it's broiling hot here. It's fun to see them!!

mcd - You are so kind. You looked pretty dishy yourself - and that G&T ;)

jan - fascinating ... must be a British trait - we are very British over here at times.

rel - That is one clever little ditty there!
re the tattoo - that's just what ABM said! Male humour?

catherine - You are very kind to ask about a copy ... I can arrange it if you like through OUP.

january - I do already and it's easy to keep warm in front of a fire and with gloves, scarf, and hat if we venture out.

deb r - I love the summery pics you post too!