Please Note: This is a writing circle that Shameless has created from his blog. Earlier (before edits) I may have given the false impression that it is my own writing circle ... uh-uh. I am not that imaginative. 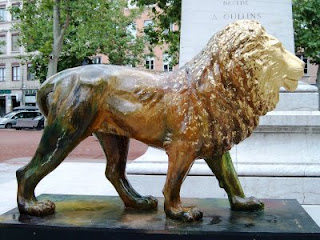 I have named the lion I adopted Kauri because his colour reminds me somewhat of the polished wood of the giant kauri tree of Aotearoa. (Aotearoa is the Maori name for New Zealand.) I decided to develop this idea and imagined a lion such as Kauri prowling about in New Zealand's native forest (which is a rather incongruous thought.)

Traces of pounamu green
stain your legs. Lion, you are here
among the rimu and totara.
Greedy for the insects your paws disturb,
piwakawaka flit and cheep
above your burnished back
as long as a valley.

From the darkened depths
of forest fern and moss,
you lift your heavy head to gather
what grassland-sun can be found
up where trees lift branches
to granite mountains
and sapphire sky.

A silver waterfall crashes,
a river growls. You shake
your mane, the colour of polished wood.
As you merge into the land
it is as if you never were.
In the wind
we hear the kauri roar.

pounamu - A green river stone, or jade - also called Greenstone - which is sacred to the Maori and used in their jewellery and for tools such as adzes. It is regarded as a protected national treasure and is not permitted to be taken without permission from Kai Tahu - the South Island Maori tribe.
rimu and kahikatea are native New Zealand trees
piwakawaka is the Maori name for the small bird known in English as 'fantail'.
- June 03, 2007

A fascinating look into Maori culture! As for the writing group, too bad Salt Lake City is so far away from Dunedin. The last writing group I was in we called "The Corporation." We wrote a mystery, each of us writing a chapter at a time, each of us taking a different character's viewpoint--we called the book "The Push." It was lots of fun!A murder in the library!

PP - Good news - this writing group is actually on-line, so you CAN join! Click on the link.

Very creative idea and you did "Kauri" proud with this wonderful poem. XXOO

Cb,
Your poem makes me belive that this Lion, kauri, does infact inhabit the NZ forest.
I'll go check out your group now.
rel

You make the lion seem quite at home in the kauri forest! I really enjoyed this.

Oh, I want a lion, too! Marvelous poem, chiefbiscuit!

avus - pounamu is precious and rather beautiful. I'm glad you've had a chance to see it.

becky - Why thank you Becks!

tammy - I hope so. Lions are so majestic, it is as if they demand something majestic in return. Not sure that I achieved that, but I hope he likes it all the same. ;)

rel - Oh yes do! Adopt a lion - I can't wait to see which one and what you write for him.
I'm sure lions roam in the forests of Aotearoa in spirit - which is something of what I'd like to convey in the poem ...

catherine - Thanks - maybe I've achieved something close to what I set out to.

Marvellous CB - so glad you're in the pride.

clare - Thanks Clare - glad to be there too!

Hi, would you please pass this note along to Kauri? I invite him to come visit me on my new blog, Literary Lion of Lyon. He would probably recognize me from the blog’s title, but tell him Roary sent the invitation. Thanks.

Love your Lion and the poem -whoosh!