Today it rained. It hasn't rained here for quite some time. We'd got out of the habit of dealing with it. As we drove into town we struggled to de-mist the windows of the old Alfa. It has many idiosyncracies. For example, the front window on the driver's side keeps slipping down, so two golf tees are needed to hold it in place. Also the boot sometimes sticks, and in order to load the groceries today, ABM had to reach through from the back seat to undo the latch from the inside. It is one crazy, cranky little car.

Last night I finished the book 'Cyclamens and Swords' by Helen Bar-Lev and Johnmichael Simon that Anne kindly sent me. The writers, through their poetry and art, paint a realistic and non-judgmental portrait of Jerusalem and the surrounding landscape. They seem to be saying, that to choose to love Israel, and Jerusalem in particular, is also to choose to have your heart broken, but that you learn to learn to live with it. They describe a kind of peace to be found there in the landscape - in the flora of cyclamen, poppies, olive trees and almond blossom ... the fauna of deer, pelican and hawk - and a peace also in the shadow of churches, temples, cafes and markets. But this found peace goes hand in hand with a terrible tension. A tension I would personally find intolerable. In that quarter of the world, constant threat cannot help but shape your daily existence. Is the person standing in front of you in line to buy pomegranates, a suicide bomber plotting to kill as many people in one go as he or she can? In its own way, for all its loveliness, it is a disturbing book, because it's a reminder - lest we forget - that the local neighbourhood for some of us earthlings teeters daily between sudden peace and sudden war. For all its allusions to political unrest, the writers appear to cast no blame; they simply reflect what their life is like.

C has arrived back from his road-trip North. He has subsequently had both his cast and troublesome wisdom teeth removed, and is now looking for winter employment.

And yes, winter has arrived. Both C and I noticed this afternoon that the air was full of the sound of birds establishing their feeding grounds. No doubt the sustained period of mild weather, followed by the cold snap this weekend, has driven them to seek out what berries and bugs can still be found. 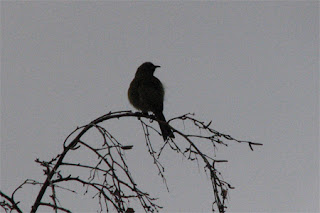 Once the rain stopped, we could hear them defining their territory as they grouped and re-grouped, swooped and fed, and every so often sent out the familiar chiff-chiff-chiff warning to each other that there were cats about. I identified not only blackbirds and thrushes, but tuis, 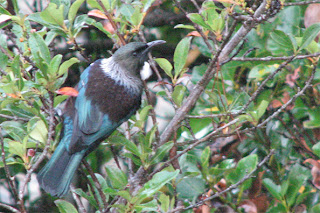 chaffinches and bellbirds. As usual, it was hard to get a picture of them. (Click on the photos for a closer look. The birds below are chaffinches, the one above is a tui and the bird in the top pic is perhaps a bellbird.) 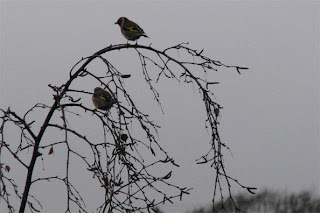 A phone call from S in Japan was a happy interruption. He was in Osaka with his Japanese girlfriend E, in a computer shop and looking to buy a laptop. He needed some advice from his father about specifications ... megabytes ... the attributes of macs and pcs. (I haven't a clue what it was all about really - it was just lovely to hear his voice.) He said it was really hot over there. What a contrast to the temperature here. But it's only fair. As our planet spins, we each get our turn to sit nearer the hearth. We know it and the birds know it.

We've had heavy rain too just recently but today is a beautiful summer day. It's strange to think of you now going into winter. It still looks lovely in NZ though.

Your son will have fantastic choice in buying a computer in Osaka. There are blocks crammed with floor after floor of the most wonderful electrical goods.

I have to say that I prefer the new photo which is a reminder of how you looked as 'mother of the bridegroom'. Glad your other son has now got over his troubles with teeth and limbs.

Your blog CB goes from strength to strength.
I love it.
Clearly, you have so much going on in your own very happy life....
yet you're so much "WITH" ( in spirit, I mean!) your precious grownup family...

carole - Thanks for your helpful and kind remarks. :)

It's suddenly winter in Melbourne - cold and a bit wet. The autumn ended abruptly on May 31st with the hottest May night in recorded memory. Up to then we rather wondered if winter was ever going to come.

I like your review of Cyclamens & Swords. I'll point it out to Helen and Johnmichael - they'll be delighted.

CB,
Just a lovely, comfortable post. I image myself and D. sitting at your kitchen table with you and ABM, chatting about the world we inhabit and our children. ;-)
rel

In Christchurch, the first day of winter was 6 degrees warmer than the first day of summer. And we haven't had any rain yet. I'm just about to add photos of yesterday's walk to my blog. Yay for long weekends!
(Oh, and you are very lucky to have bellbirds and tuis near your house)