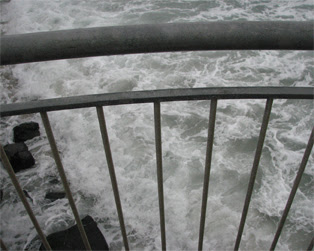 Today I met a friend for coffee. We met at a coffee shop at St Clair beach where because of a stormy southerly wind, the waves were smashing up against the sea wall. I'd say it was a sign that winter is on its way, except I've seen conditions like this in the middle of summer here in this delightful southern city. We have weather here, not climate.

Under the waves of the ocean, the deeper you go the darker it gets. A world without light where strange creatures move. The creatures that belong there move freely, comfortable in their skin. It is the only world they know.

D and I talked of different cultures and how everyone moves in their own world largely unaware of other societies and customs. We are like underwater creatures, ignorant of other worlds above and around us. Until we surface, re-adjust our breathing and take in our own ignorance.

D recently spent three weeks in the slums of Cambodia and experienced what it is like to live with nothing. It has been a life-changing experience. But the biggest culture shock she said is to arrive back in affluent New Zealand, her eyes opened, and realise how much we waste, how much we take for granted and how much we moan about trivial things. And mostly, how ignorant we are of the world outside our own framework.

On my walks recently I've noticed a lot of people are building high front fences in front of their houses. I guess it's for privacy and safety, but I feel sad at losing the friendly sight of yet another front lawn and garden.

I've been reading a bit of science fiction lately. It's a genre where not only the future, but other universes are explored, where as a reader I am exposed to strange and weird customs and beings. Where the human beings of the future are unrecognisable, so different are they to the ones around me now. As I read, I am all the time comparing what I know with my own ignorance.

We each move in our own darkened world, believing it to be the only world. What strange underwater creatures we are.
- April 01, 2007

Yes, we are strange creatures, aren't we? Thanks for giving me this to reflect upon.

It a strange dichotomy in that the world is getting smaller with travel more available for the masses than ever before...>And yet here we are fencing ourselves in and spending more and more time plugged into the matrix ....and it will get worse .....

Your right CB, and I also think it's strange that we always think our weather/season is the weathr/season!

I also find it strange that as travel gets easier and cheaper we get more obsessed about migration, as if it's fine for us to impose ourselves on another cultures and potentially change them, as long as it's not the other way round.

I liked the switch off the Australians had yesterday, it just shows how much energy we guzzle. We need more things like that to make us appreciate how lucky we are. Here the fuel depot blockades a few years ago demonstrated just how much we now rely on instant gratification from the fuel pumps for our lives to work.

We had seas like that a week ago, due to the moon/time of year

Cb,
We, each to themselves, revel in the comfort of our "own" world. To contemplate change brings forth uncomfortable feelings. The darkness is our refuge. It's easier to deal with. When we venture into a different realm we compare it to ours and wish to remake it into what we came from. (generally speaking.)
Change is ok as long as it's nimby.
rel

CB, Isn't it the true that we take so much for granted. You have given me food for thought this AM.

This was a wonderful reminder that we are just a small part of a huge whole :) It would be great if we could all have an experience like your friend. xxoo

It's a blessing to travel- really it is... it takes us out of our so-called real world and into other people's "real" worlds... it develops compassion and tolerance... something we all need these days.
An excellent post today...

No matter how much we have, we wrap ourselves up in worries and pressures. Perhaps if we could simply see how lucky we are we'd stop all our running in circles and simply reach out to others.

How right you are, CB, speaking to you from my own corner of the underwater.

The waste is truly prodigious and shameful.

wenda - Thanks for dropping by.

dinzie - Unfortunately what you've said rings very very true. Where will it end? I hope not like some of the science fiction describes ...

apprentice - You've given me more to think about as well ... that 'instant gratification from a fuel pump'is so true.

rel - I guess all it takes really is a change of attitude and having an open mind. Well, that'd be a start anyway.

jone - It's good to reflect on what we do have and what we take for granted, and what others don't and, I guess, be thankful. A feeling of helplessness as to how to help is often the result - we can't all be Angeline Jolies!

cgp - Thanks - sometimes there's a theme to your day - do you find that? And everything that happens along seems to refer back to that theme.

tammy - Well put - a small part of a huge whole. I like that.

regina clare - Travel with an open mind is truly educational at the deepest level.

twitches - So true. How can we keep remembering to do that? That's the trick.

becky - Hi back from my underwater corner too - a few sharks around today! But thankfully some fantastically, amazing coloured fish as well! Blub, blub.

Yes, some folk do believe THEIRS is the only world.
I worked once with a woman who genuinely believed everyone felt as she did about most things that happen..She was always adamant on this. She would not recognise/respect other's opinions. She always believed people would eventually reach HER conclusion.
It was hard to reach her, as you can imagine.

I agree most of us are strange, deep-sea creatures. It reminds me of something I saw on a bait product today:

"Always try to think like a fish...no matter how weird it gets".

coming back from bali was a real eye-opener for me for the same reasons your friend talks about. i remember bursting into tears in the supermarket on our return. i do agree that we are strange creatures. thanks for the post and for the reminder to be more aware of not only my world but also that of others.

jan - I know people like that. I'm usually rather silent in their presence! I know when I'm against a die-hard bigot and nothing I say is going to make any difference.

katherine - Hi! Oh I just LOVE that quote - it's worth copying out and putting on the fridge!

leonie - yes my friend felt exactly the same way. It's a kind of frustration at the ignorance of our own world and a grief for others I think.

You lay bare some truths, like the fact of cultures living each in its own, closed world, or like the wanton destruction of resources in most affluent societies.

Do you think that we are being observed, too, much like we observe those slippery creatures in the water? Perhaps so.

I enjoyed the read, as always.

yes i agree- we do lead charmed lives but whatever material situation we are in we are always looking for problems- to complain about, to be unhappy about and dissatisfied with our lot. I think it is the downside of the problem-solving aspect of human psychology that drives us to this as well as consumerism.
and i truly hate how all the lovely old rickety fences in our neighbourhood- some only a few feet high that you can just step over- are being torn down for high wooden or worse, aluminium fences. it makes me feel boxed in and alienated from my neighbours. all part of the back to the 50's paranoia - fear of the 'others' we have happening in australia. and there you go, i'm complaining about other people again!!
please post some good news about the weather, i don't care if you have to use file photos.