I have been tagged by Pam of Tuscon for my list of ten favourite birds.
After some thought, here they are - all native birds to New Zealand. First bird is the *tui - (seen to the left). This photo is my sister's partner's photo - he takes fantastic photos and this is one fine example. A territorial bird with a beautiful song - copied from the bellbird. They are great mimics and can be taught to 'talk'. They love to feed off the nectar of flowering trees.

kiwi bird
Originally uploaded by Fuzz Bandit.
*kiwi. A flightless bird in danger of extinction. We New Zealanders are known throughout the world as kiwis.

Fantail
Originally uploaded by Bennolo.
* fantail - or piwakawaka. They appear friendly and approachable, flying close overhead or dancing just in front of you - but that is only because as we move, we disturb insects - the real reason for thier interest.

Stuffed Kereru
Originally uploaded by dubh.
*kereru - large, wood pigeons with a white apron front and tiny head atop a fat body. They have a lazy flight, their wings making a wop-wop-wop sound as they fly overhead. They are so big that when they perch on the powerlines, the lines visibly droop underneath.

Kakapo
Originally uploaded by imageobject.
*kakapo - another endangered bird (a flightless parrot) that has been rescued by a govt-sponsored project to save it and transport it to a rat-free sanctuary on an island. It makes a very loud booming noise when looking for a mate.

Yellow Eyed Penguin
Originally uploaded by mualaf.
*yellow-eyed penguin - here in Dunedin we have yellow-eyed penguins that are able to be observed as they arrive back after a day at sea, and also while nesting. Again, endangered.

albatross silhouette
Originally uploaded by Seeing Is.
*Royal albatross - we are able to go out to where they nest on Taiaroa Head, near to the city, and observe them flying and nesting. Best seen in the flesh as a photo just doesn't capture their huge size. They are full of character and have an amazing smiley look to their beaks.

Kotuku, the White Heron
Originally uploaded by jemsweb.
*white heron - kotuku - An astonishingly beautiful bird I have yet to see in the wild - a treat in store.

Morepork
Originally uploaded by gilowe.
*ruru or morepork owl - Their lonely, plaintive night-call that sounds exactly like they are saying, 'morepork, morepork', is a familiar one in New Zealand.

This is a bossy seagull on a rock at Back Beach in Riverton. I wonder what the caption could read? "How many times do I have to tell ya? I don't like MacDonald's!" 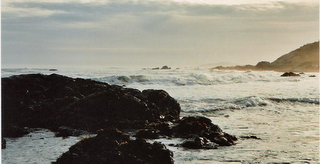 A shot of the sea at Back Beach, Riverton where the waves wash up on to a shingle (pebbly) beach. Birds nest on the stones in the open and it wasn't until later I saw a notice informing visitors to be wary of where you step. I hope I didn't step on to a tern's nest! (I know I didn't - being the wrong season is a pretty good clue.)

Now we are up to last weekend. This is the back end of me looking out to sea at Bluff - which is this side of halfway to the Antarctic and right at the 'bottom of the world', as people are fond of saying. If you look closely you can see in what direction and how far it is to NY. 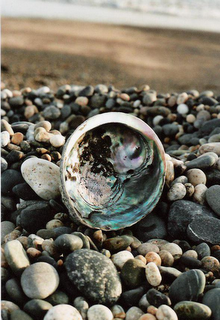 I'm tempted to use this for my profile image - I am very fond of paua shells (paua - pronounced 'pa-wa'- is a type of abalone.) Whenever I wander the beach, I never come away empty-handed. This shell now sits on the steps at home. A reminder of a magic weekend.
- April 29, 2006 9 comments: 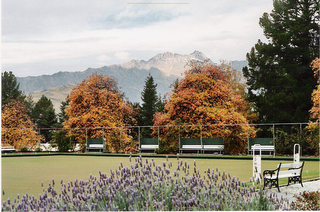 This photo shows Queenstown Bowling Green and out towards the Remarkables mountain range. We dropped into see ABM's folks in Queenstown on our recent trip to Riverton. It was the long way home, but worth it. ABM loves his hometown - and I've grown fond of it too over the years. 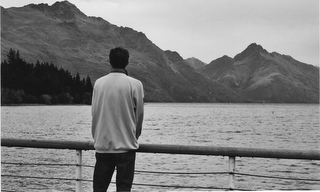 This is ABM looking out over Lake Wakatipu towards Walter Peak. It's not Queenstown at its best, being a little grey and drizzly at the time. But I never mind a grey and misty outlook - maybe it appeals to my celtic side.

Just to prove that we in the southern hemisphere are experiencing autumn in all its beauty. 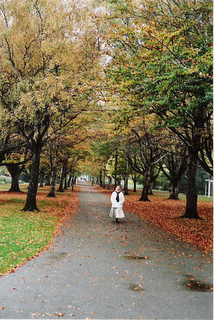 This photo is taken on our recent trip to Invercargill, way down at the bottom of the South Island of New Zealand. We strolled down an arcade lined with trees showing off their autumn foliage. It was a grey, misty day, but the autumn colours were warming and bright.
A mother and her two children were there on an outing. Her son was riding his bike, but the chain had become tangled. ABM spent a bit of time untangling it. As a result, his hands were coverd in oil. Not a great look when you are on your way to a wedding (as we indeed were at the time.) One of the not-so-glam sides to being a Knight in Shining Armour!
- April 29, 2006 7 comments: