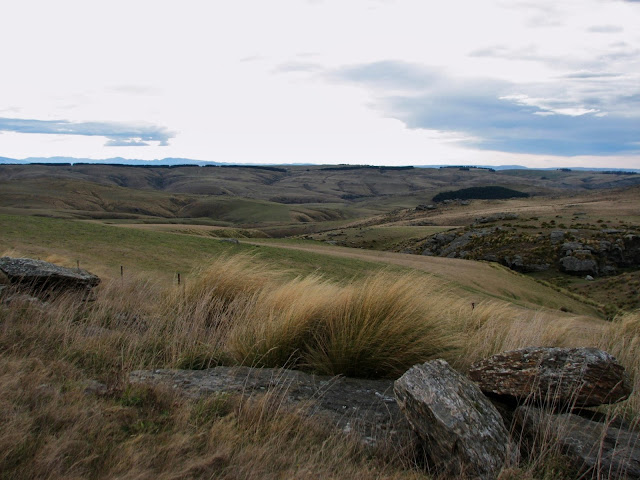 ... typical rolling, rock-and-tussock country, that you see in the Maniototo, South Island, New Zealand. The day we were there, a gale-force wind was battering the tussock - but that's fine, tussock was born and fashioned to withstand weather behaving badly ... 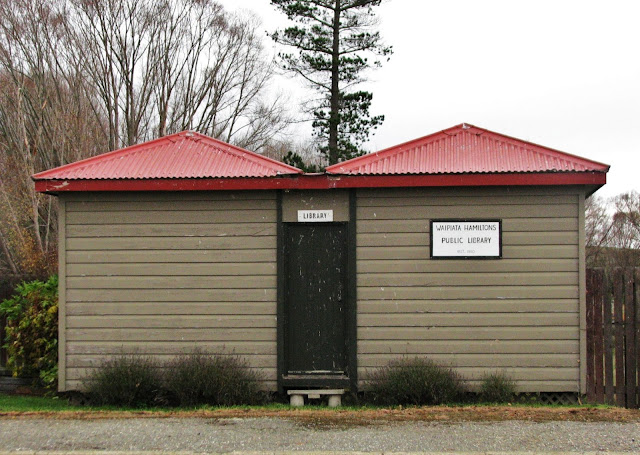 ... another photo to add to my 'Small Libraries' photo album ... 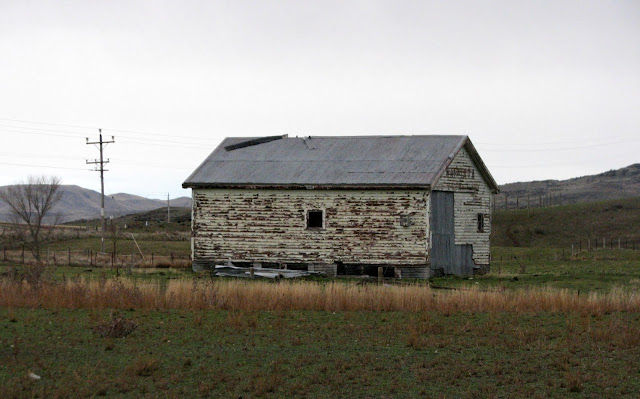 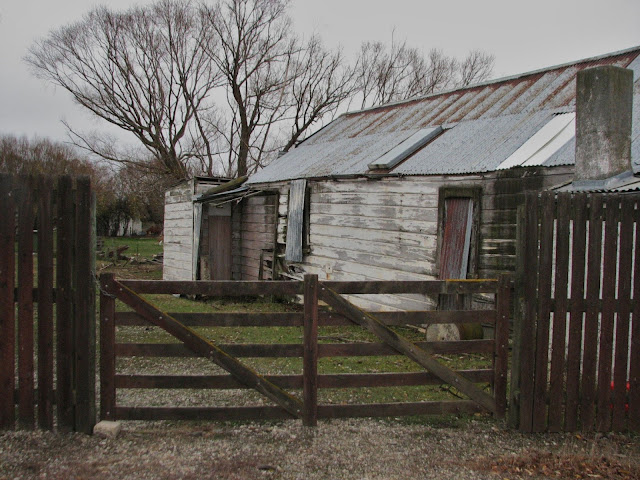 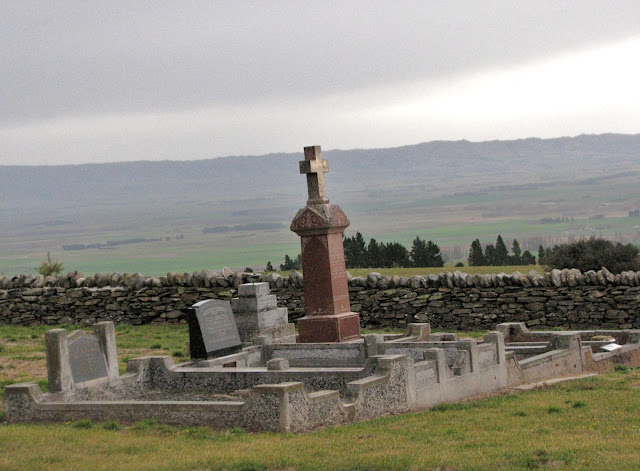 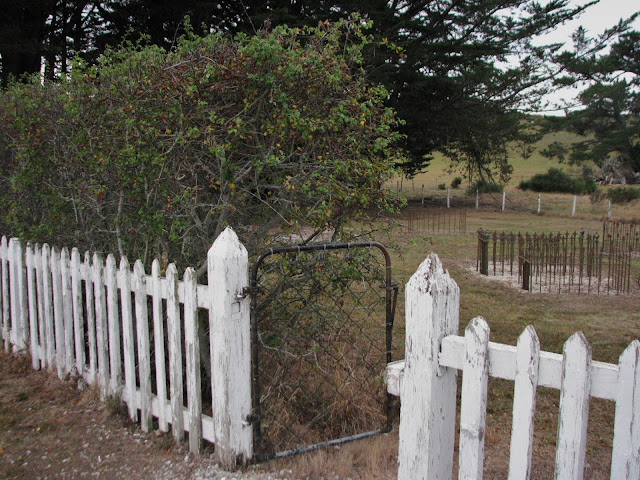 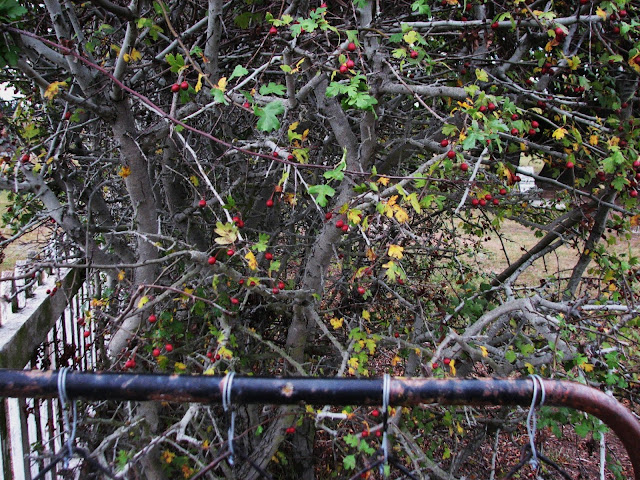 ... rose-hip (which grows wild in these parts) by an iron gate at the old Macraes cemetery. (Macraes is another historic gold mining settlement; except, since the 80's, it has hosted a present-day, going concern. A mining company is gutting local hillsides for any subterranean gold to be found beneath) ... 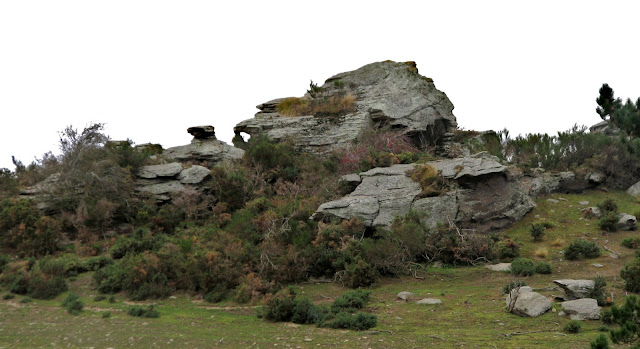 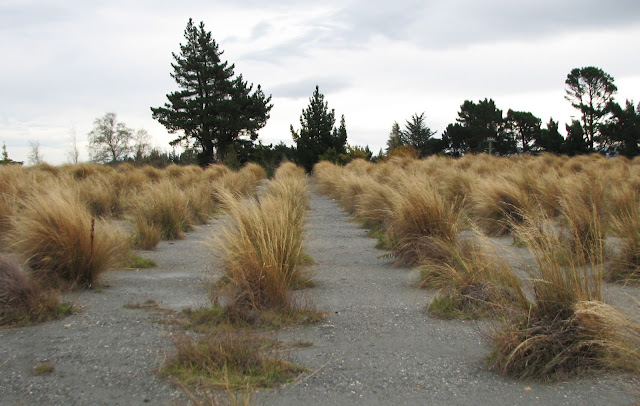 ... an attempt at living sculpture at Macraes. Needs a more careful approach to its upkeep and maintenance, but an attractive enough idea and one way to honour the hardy, humble tussock that is so much part of the South Island landscape ... 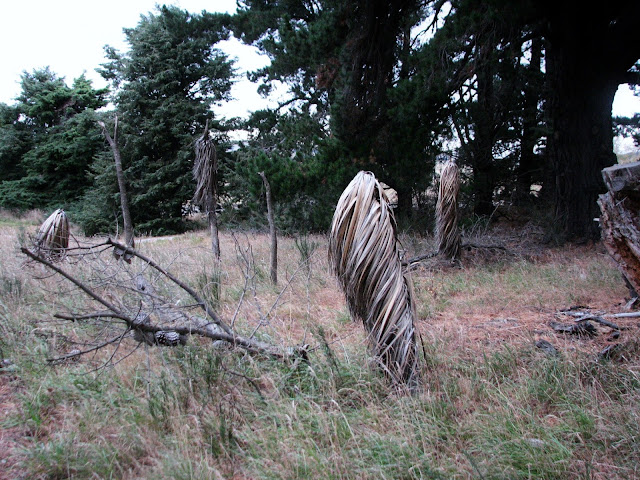 ... Not so living. At the back of the church (in photo below) I saw these Dr Suess-like plants (dead cabbage trees) ... 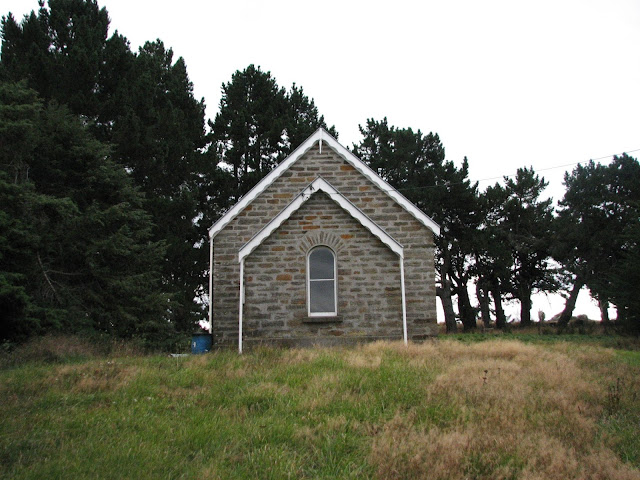 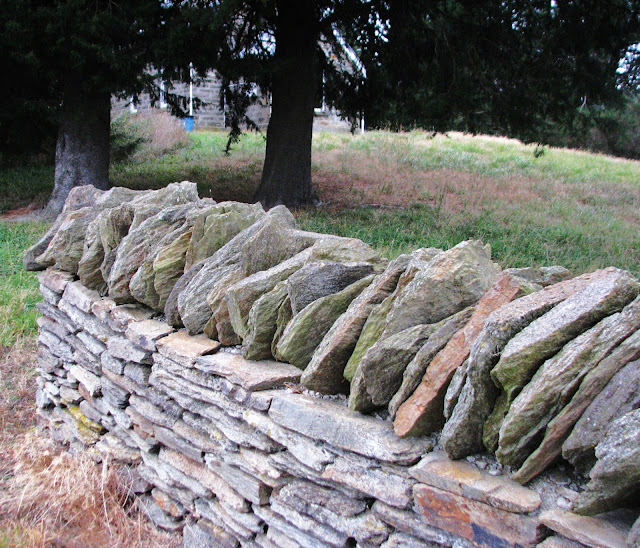 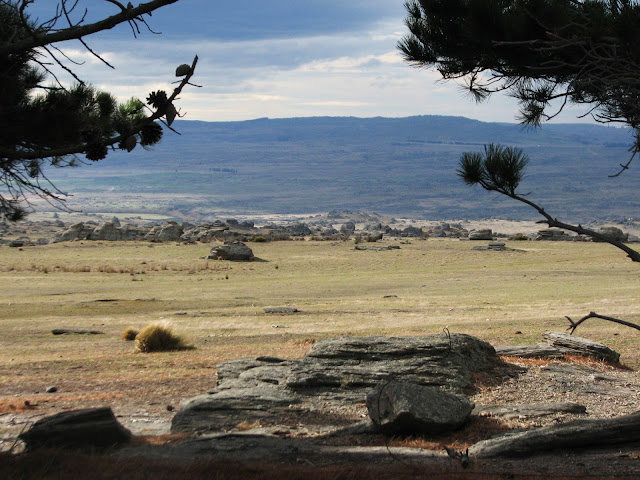 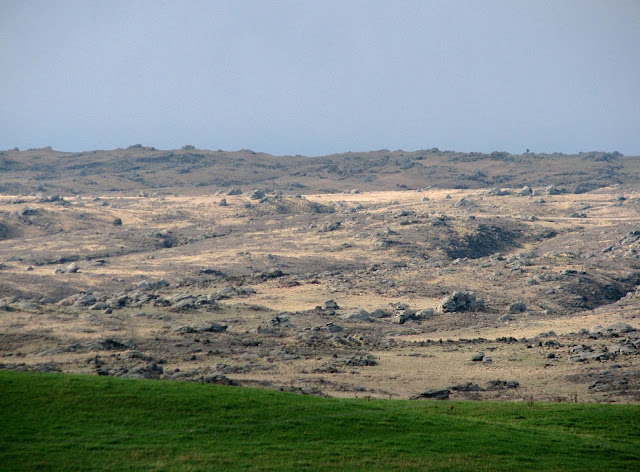 ... the green foreground shows the difference that a little irrigation makes ... 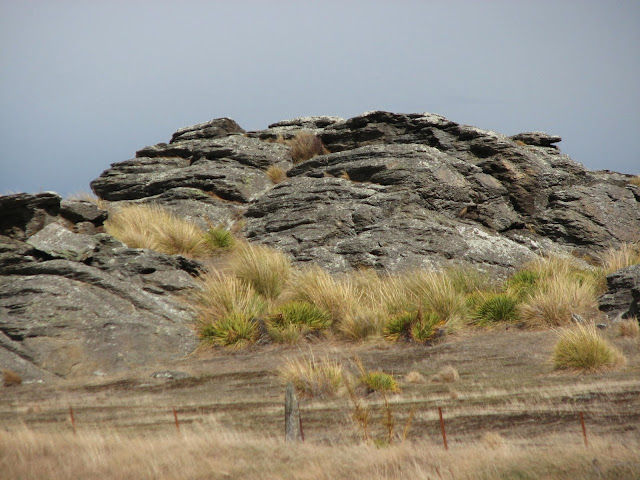 Recently Robert and I celebrated our Ruby Wedding Anniversary. Seeing as the actual anniversary fell on Mother's Day, we decided to leave the breakaway weekend we'd planned to celebrate, until the following weekend. On the day we had a combined Mother's Day and Ruby Anni. dinner out with what family we have here in Dunedin, and skype-d with two sons who are, respectively, overseas in Berlin and in Wellington, New Zealand.

Then this weekend just past, we took off into the interior of the South Island to celebrate our forty years of marriage. (We both can't quite believe it has been that long already!) It was by necessity an inexpensive trip. (My planned trip to Europe in Sept - Oct. has substantially slimmed down our coffers).

We roamed countryside that is familiar, but nevertheless always a treat to re-visit, with its wide expanses of land and sky, broken by stunning borders of supine mountains, gently folding into the special light that is a feature of this unique place. Rocky outcrops and landscapes, are also a feature. The eye always has something to feed on.

A history of gold-mining and rural settlement also adds interest to the area. Comparatively, it is very recent history, dating back only 150 years. We visited a couple of cemeteries and wandered around what few headstones remain of the (also few) that were erected. Notices list the number of miners and families of miners, as well as land-owners, who were actually buried in these places. The names on the lists amounted to a hundred or so, a much larger number than the amount of graves evident. Some of the names referred to Chinese gold-miners whose bodies were shipped back home to China.

At a place called Macraes, a monstrous quarry has been formed where a company (called Oceania Gold) is mining for gold. Probably in an attempt to keep in good with the locals, and with any public concerned at such intrusive and brutish operations; they appear to have a semi-transparent approach, which includes a lookout for the public to drive in and see part of the work for themselves. Massive machinery can be seen plying the face of a tremendously large gravel pit. (Apparently the policy, and requirement, of the mining company, is to leave the land as they found it).

We could see trucks bigger than bungalows, toting loads of gravel on various looping roadways leading to where the gravel will be processed in order to find the gold among the stones and mud. Despite the size of operations, the work is obviously (and possibly by requirement) being carried out methodically, symmetrically and in as neat and tidy a manner that such an enterprise is able to achieve.

After our weekend away, and back home in Dunedin again, we attended an event on Sunday night at the New Edinburgh Music Clubrooms, in an old church on Dundas Street. Local musician, Matt Langley, was performing both his own music, as well as songs he has composed using the words of poet, Brian Turner. Brian Turner, an established and well-known New Zealand poet, lives in the Maniototo, so of course a lot of his work is about this place. Very fitting for Robert and me to have the Maniototo, where we had spent the weekend, reflected back so beautifully, in music and word.

Also at the concert was my buddy, Jenny, who forms the other half of our Outriders poetry-reading duo, J&K Rolling.

We both spoke to Brian Turner afterwards. He said he had just got back from Auckland Writers and Readers Festival, where he was part of an invited panel of South Island writers discussing (among other things I'm sure; and please be aware that this to a degree is my interpretation of what he said) whether or not there was a divide between the South Island and the North Island (literary world?)

I'm not sure how wide the scope of discussion was - or even if 'divide' is a fair description of the discussion topic. The other panelists were Joe Bennett and Fiona Farrell. The topic heading was: 'Another Country?' Taking the title into account, it's safe to assume that there was at least discussion on how separate the two islands are in relation to writers and readers. I would love to have been there to hear the discussion. I've been looking on-line to see if there has been a report of the discussion, but apart from some reference by some North Island joker about part of the South Island falling into the sea (an indication of how much North Islanders care?) I can't find anything.

Whatever, Brian Turner's relief that he was once more safely and comfortably back on home soil, in the South Island, was patently obvious to both Jenny and me.

And speaking of words, writers and such, after all these recent distractions, it is now back to work on my novel, "Craggan Dhu'; interspersed by visits to the gym and / or walks (and being grandmother).

However, if the weather keeps behaving badly and dishing out this warm and settled autumn weather (apart from one or two errant weather-systems - thankfully short and sharp) it might be walks for me, rather than indoor, gym-work.

It is getting so I am longing for decent winter weather. What I call real weather; weather that warrants a chunky jacket, layers, scarf, gloves, hat. Once that kind of weather hits again, I will be  listening out for the collective sigh of happy Dunedin-ites reaching for their winter gear. Such an elongated warm-weather spell as this one, has a lot of us Dunedin-ites feeling discombobulated. Not all, though, some are reveling in it; as seen by the amount of bared, summer-tan work still on show.

The rest of us more pale varieties of Dunedin-dwellers, however, are extremely unsure if we really want summer to last as long as it appears to want to this year.

Enjoyed your images, Kay. Photography is not all about the colourful and beautiful - starkness has its place too.

I'm prone towards the stark.

Yes, the weather has dicombobulated (brilliant word) this Dunedinite too!
Love the potos of the Maniototo - my favourite place on earth! I was interested to see the photo of the Waipiata/Hamiltons library. We spend a bit of time up that way but never knew it existed. Where is it? Have you seen the tiny library at Patearoa?
Enjoy the cold snap over the weekend and good luck with your novel.

I found it difficult to retain NZ place names in my memory - there always seemed to be at least one syllable too many. Since we toured South Island three times I wondered how close we got to Maniototo - it may have been Alexandra. That would square with your reference to gold mining and especially to schist which characterised the crumbly cliffs en route to the town. We left the homestay on a Sunday and the roads were utterly deserted; as a diversion we turned on the car radio and found a station devoted entirely to classical music. My wife approved; the announcements in between the works were boiled down to "Next we'll play symphony X composed by Y and played by the Z orchestra conducted by A." Nothing more. No references to where Y was living at the time, what inspired him and what were his major influences. The aim seemed simply to play the music, admirable.

Incidentally what you call a schist fence we would call a dry-stone wall. The other difference being that such walls are created with whatever shape of stone comes to hand: now a rough sphere, next an even rougher tetrahedron. It's a mystery how they stay up. Dry-stone walls are a feature of the rural part of my home county, Yorkshire. Many have existed for centuries; after a while they cease to be artefacts and become an integral part of the natural geography.

I agree about tussocks: they formed the texture of the countryside as we swung west, aiming for the coast via the Haast Pass. Where the wind blew and blew.

Roderick - Yes, you would have received a taste of the Maniototo near Alexandra. One of my favourite things about that place, is the wild thyme that has spread from goldminers' gardens to grow over whole hillsides and in season, peppers the air with a lovely scent. The radio station you came across would have been our wonderful Concert Programme - we New Zealanders probably don't value this station enough. I enjoy having it on sometimes as background music when I am writing.

Sue - I thought of you when we were there as I remembered it was a favourite place of yours.