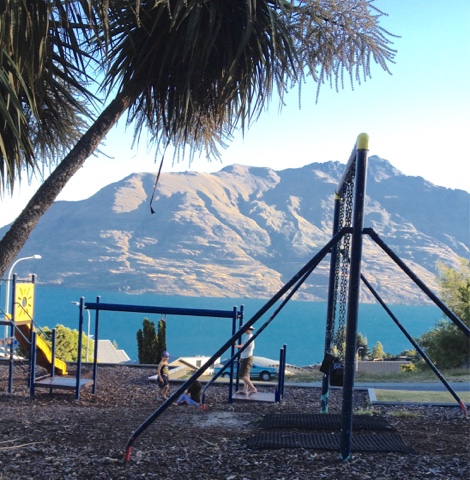 I write this from my husband's birth-place in Queenstown, New Zealand; appropriately enough for the day that I write these words, is his sixty-first birthday. We are celebrating it (as we as a couple have done most years now for the past forty years) with extended family.

This year it is the first birthday without his father, who passed away early spring this year. As his mother has stated a couple of times, we keep expecting any minute to see him appear. It still feels very early days since his death.

I am also missing my mother, who died a year and a half ago. I miss her especially on those occasions when family matters - such as birthdays, anniversaries, Mother's Day, Christmas and New Year.

Thankfully, the strength we have inherited from our parents, stands us in good stead when the time comes to weather the grief of their passing. 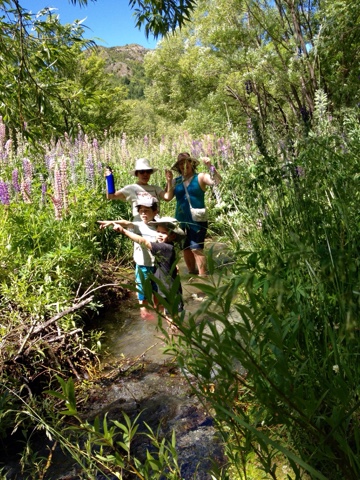 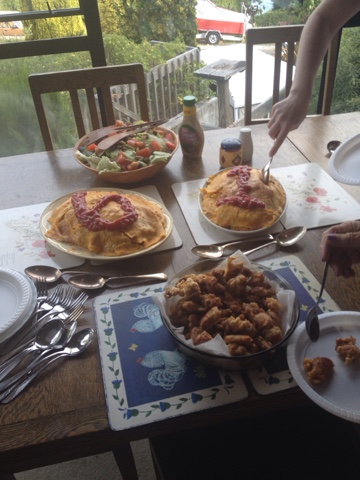 Home again and time to look ahead to a new year. 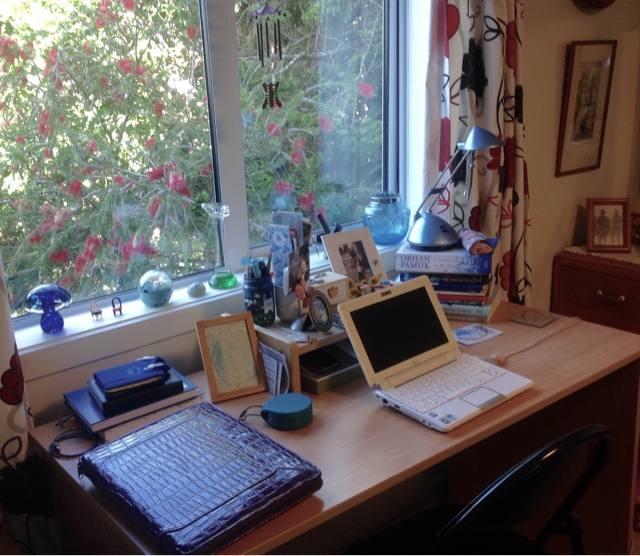 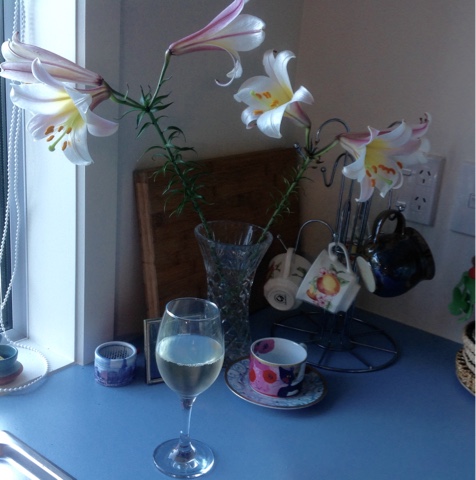 New Year's eve wine and Christmas lilies - for me, the smell of these lilies always announce Christmas - New Year more than anything else does

I have high hopes for this new year. (Maybe it'll be a year of striking gold; metaphorically speaking). 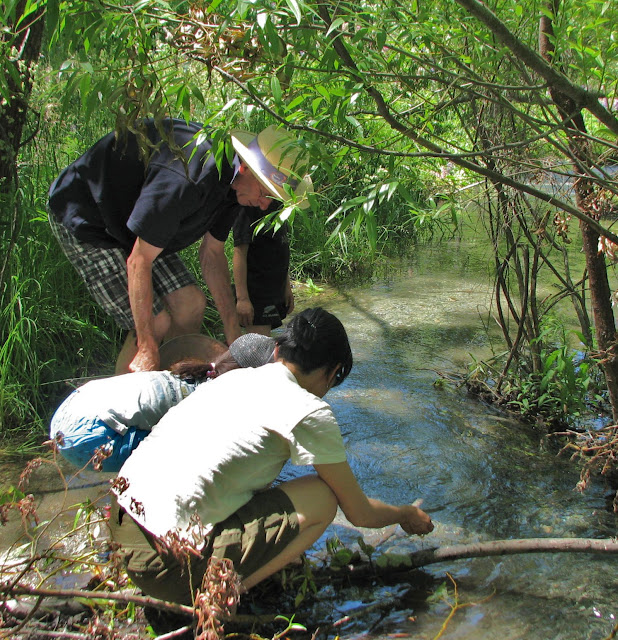 Robert, our daughter-in-law and grandchildren, gold-panning in a creek by the Arrow river - more practice than anything else as the chances of finding gold in a subsidiary flow, is unlikely 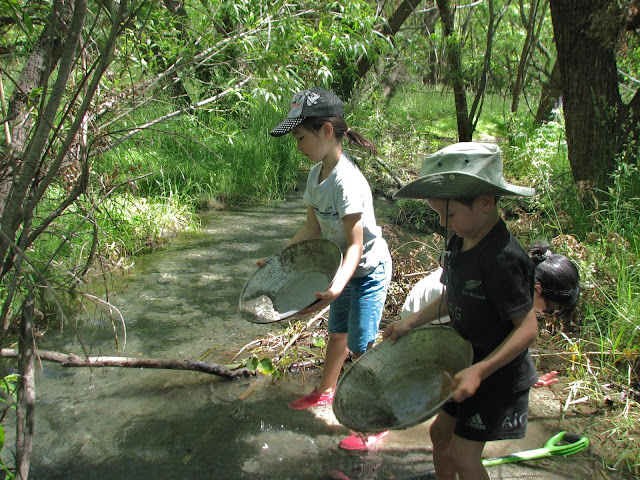 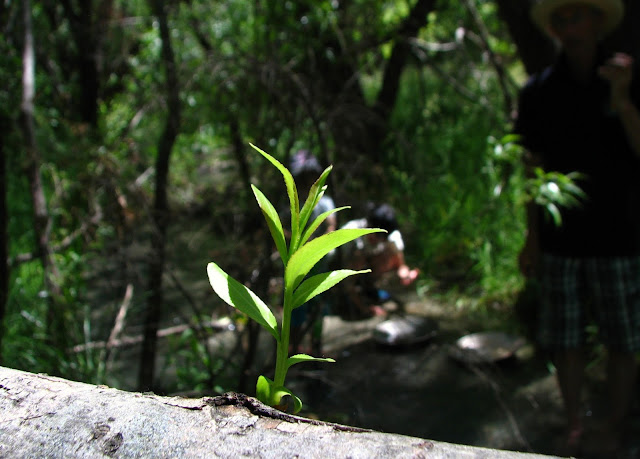 Last year was a year of letting go and farewells. Even our cat, Aggie died! (As she was aged 17, she'd had a good run). 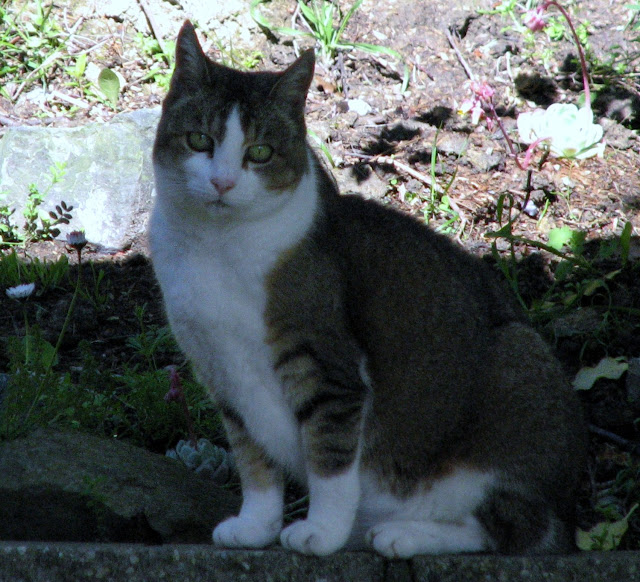 We also had to say good-bye to our car, Ruby. Our new car is a white station-wagon we call Shiro - the Japanese word for 'white'. This time I believe the car is a male and I've dubbed it, 'Shiro my Hero'. Because they were parked for a short time beside each other in the car sales yard, I am trusting that Ruby took the opportunity to pass on to Shiro her mantle of a well-behaved and reliable machine. (Yes, Robert thinks I'm crazy too!) 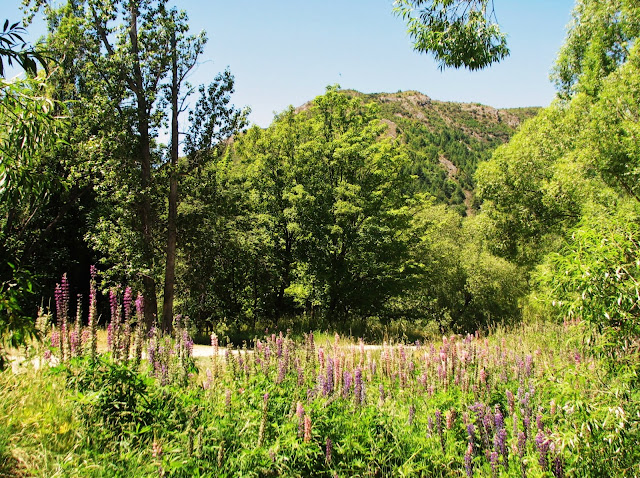 by the Arrow river, Arrowtown, NZ

Another farewell - in June, after they'd spent autumn with us, we bade adieu to our son, his German partner and their baby daughter, when they headed back to Germany. (Thank the good Lord for Skype).

Also that month, we moved out of what has been our home for 20 years, which meant packing away a lot of 'extra stuff' into boxes and storing them in the garage.

We are now happily transplanted into our new apartment downstairs; our son and family living upstairs.

The close proximity of grandchildren has been a novelty and a delight, even if it has meant letting go of what was previously un-interrupted, long lengths of writing time. 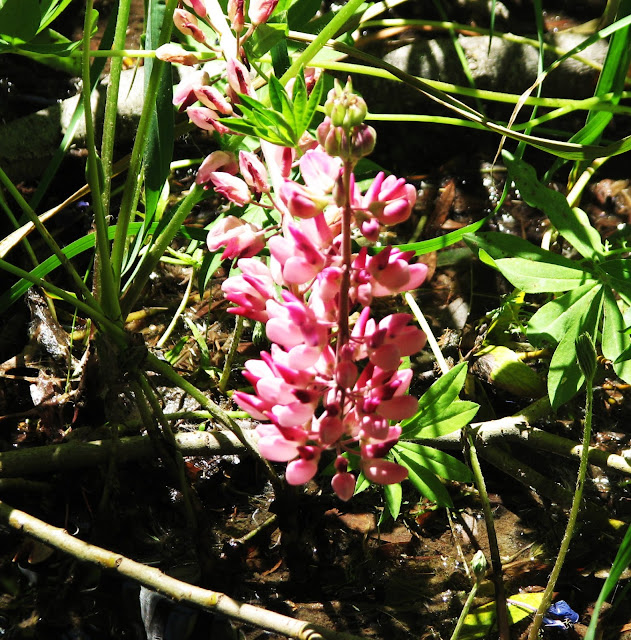 I wonder what the year ahead will bring? I'm hoping for some good writing time, whatever form this takes.

I will keep you posted.

Arrowtown, a glass of what surely must be sauvignon blanc, something by Orhan Pamuk (I've met him, he's a great guy), absorbed kids, sunshine - there are worse concantenations as background to a sixty-first (Which, I might add, is no age at all). Why you might well be on the other side of the world.

A year of letting goes and goodbyes, Kay. Even a change to your domain. Your letter shows a serenity in spite of all that. May 2016 be a healthy and profitable (for the writing)one for you.

Thought I'd drop by and wish you a Happy New Year. I hope it turns out to be fortunate and rewarding.

Hello - I've just been directed to you by Avus, and read your post about the current state of blogging. I do so agree. I keep on doing it, but many of my blogging friends have vanished. Alas.

wow, kay, a lot of happenings!

happy happy new year, my friend. i hope i finish my slippery book by spring and i hope you write sometime that warms your heart, sitting at that lovely desk.

Roderick - Well put observations. Sometimes our summer comes to the party. As I write this reply, however, the day has been smothered by low, grey cloud. Depressing everyone over the age of twelve. (Our grandchildren are irrepressible, cloud-cover matters to them not).

Anne S - Thanks so much - I appreciate your visits - usually silent - as are mine to your wonderful blog. All the best for the coming year for you too.

Pam - Greetings! Thanks for visiting, I appreciate it. I enjoyed visiting your place too.

kj - Thanks so much! The very best the year has to offer for you too, my friend. May we both finish our books! Thanks for all your inspirational posts on your blog over the year and indeed - years! Lots of love. May this year ahead reward both of us for the hard work we've been putting in. May our investments bring some return. xx

I absolutely love your photos of Queenstown and Arrowtown. They bring back some great memories of one of my most fun and picturesque trips ever!

Michelle -Thank you! Glad you enjoyed remembering back.