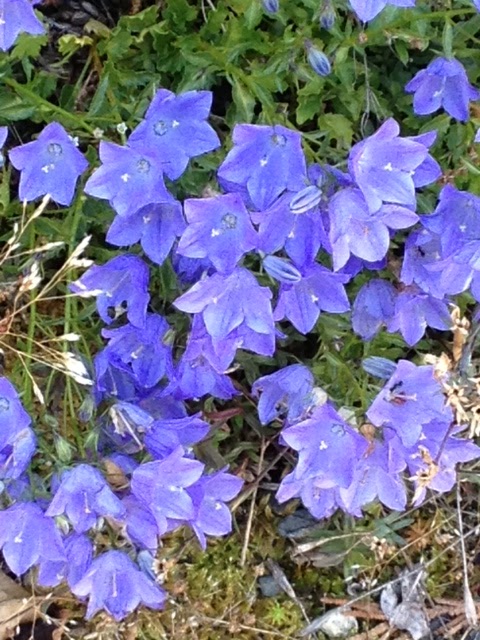 We were treated to Central Otago's warmth again when we travelled through to Queenstown to visit Robert's parents on Waitangi weekend. I left my camera behind there, the photos on it yet to be downloaded, so the gentians from their garden (taken with the Iphone) will have to be the only souvenir of that stay, for now. 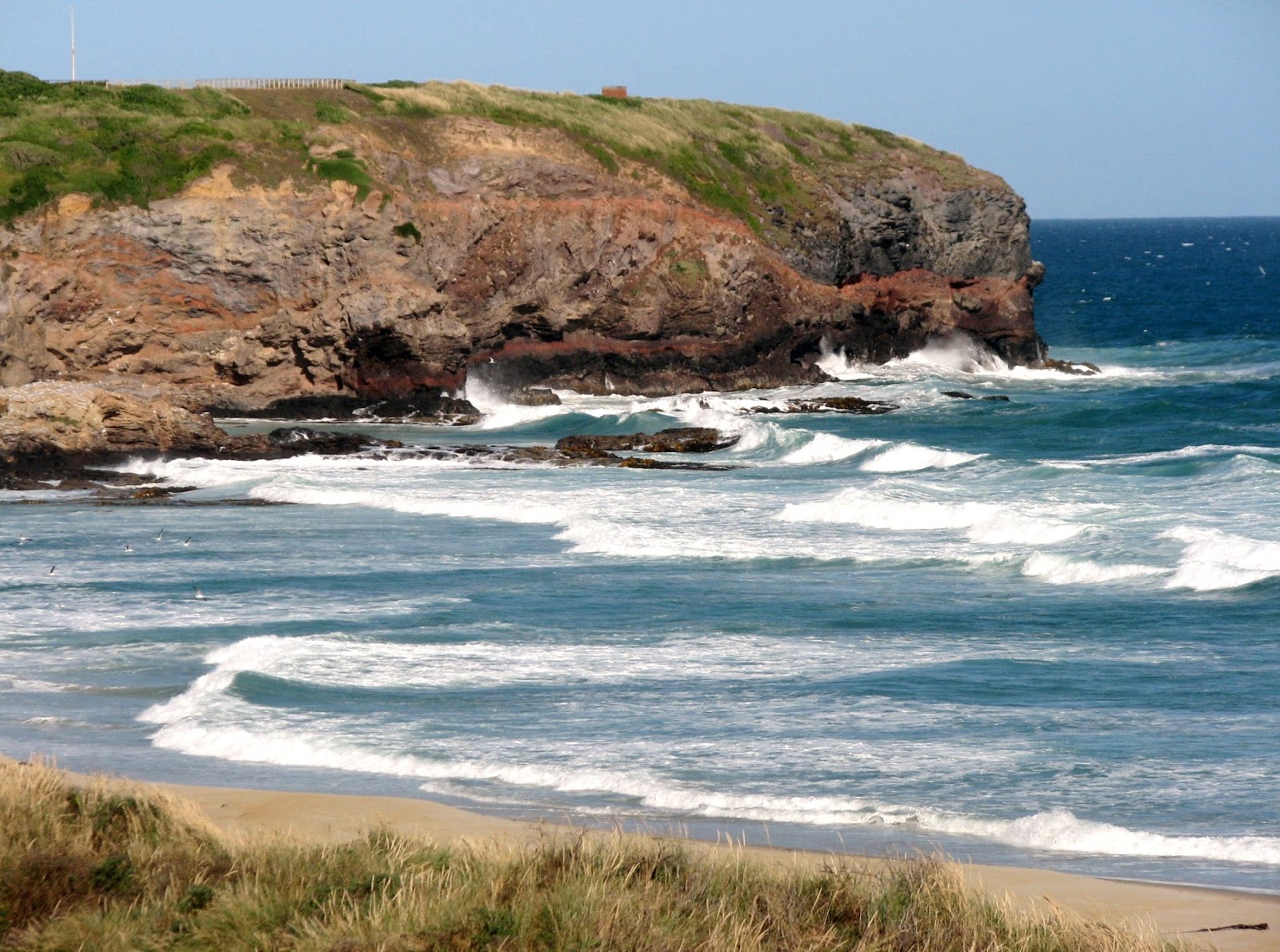 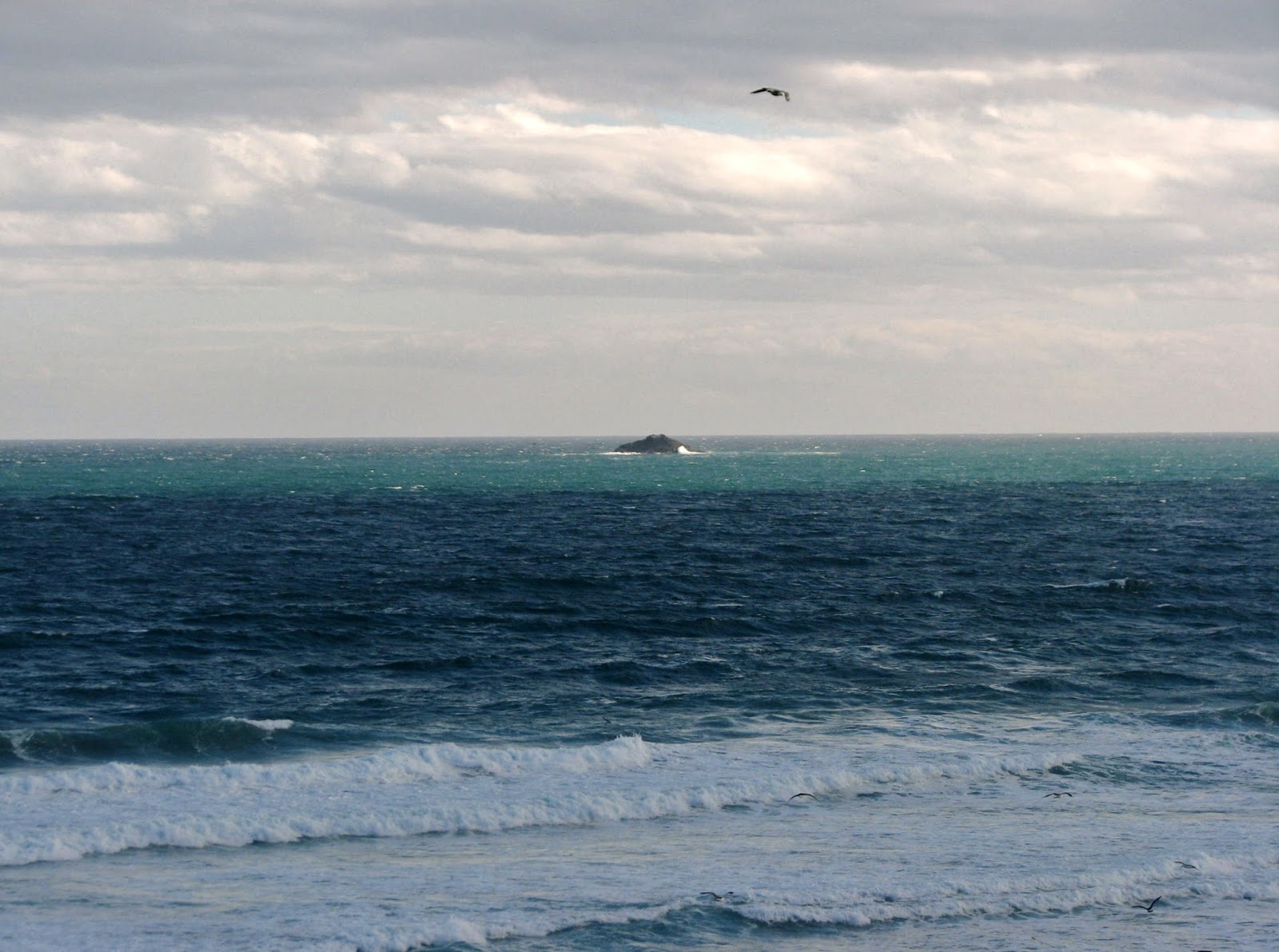 shades of blue - St Kilda looking out to White Island 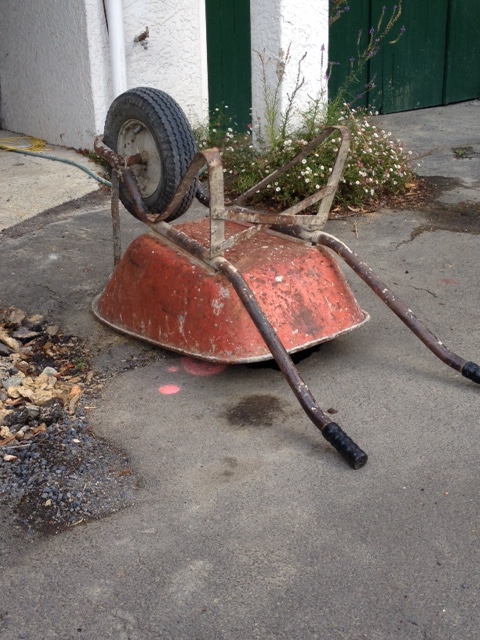 We are getting a self-contained flat built under our house, resulting in an assortment of building paraphernalia - wheelbarrows and gravel, timber, tools, pipes ... When the builder leaves, the gumboots and upside down wheelbarrows are abandoned in situ, looking exhausted. 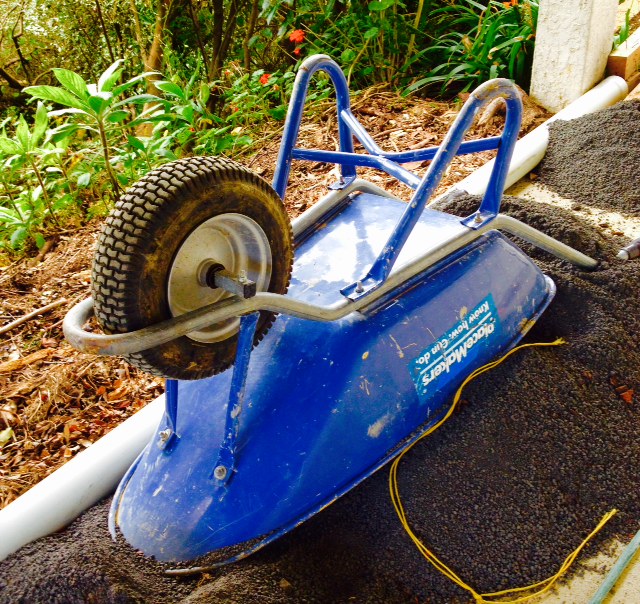 Last week my sister and I went on a roadie south, taking our aunt with us. 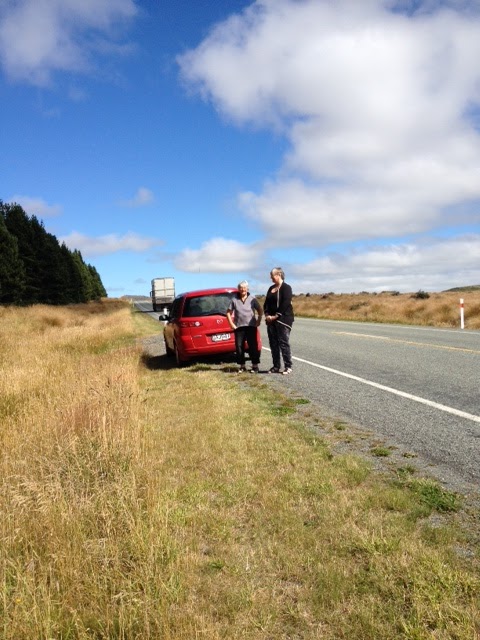 on the road to Te Anau

Once again, Iphone  photos to tell the story rather than the Canon ... but the phone does a pretty good job. I also had an Ipad to take photos with ... so was pretty well-equipped (thanks to another of my sisters, who keeps me equipped with these devices, bless her). 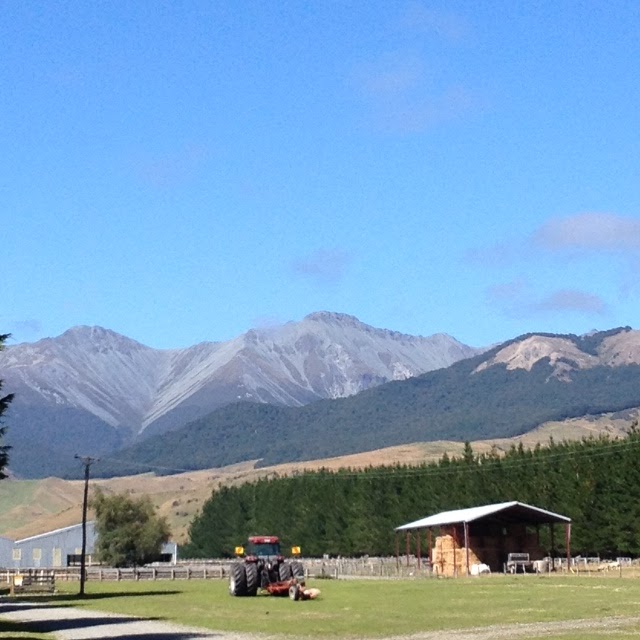 Takitimu mountains - mountains my family (whanau) claim as part of our ancestral story (whakapapa). What looks like snow on the screes is sunlight reflecting off sheer rock. 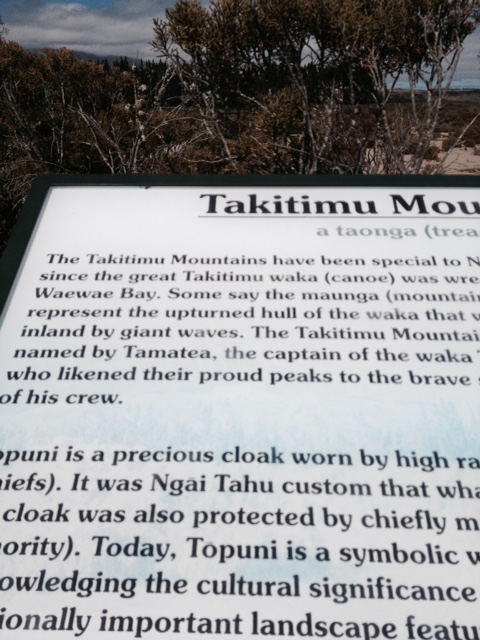 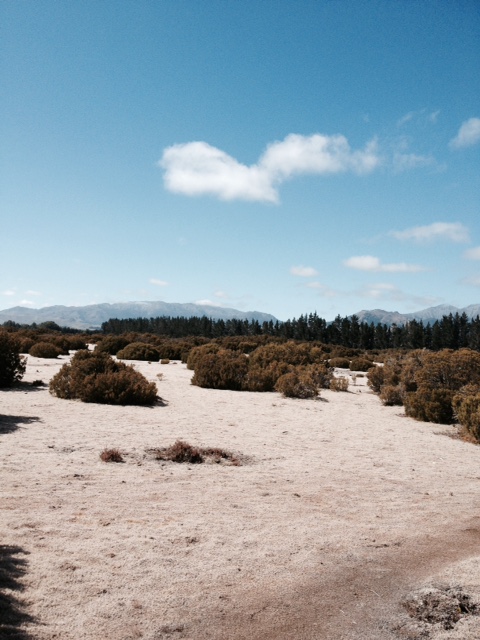 protected scientific research area featuring bog pine and moss (the grey plant carpeting the ground is a spongy, dry species of moss). This area is located down the road a bit from the little town of Mossburn, so it'd be a safe bet that this moss is what Mossburn is named after? 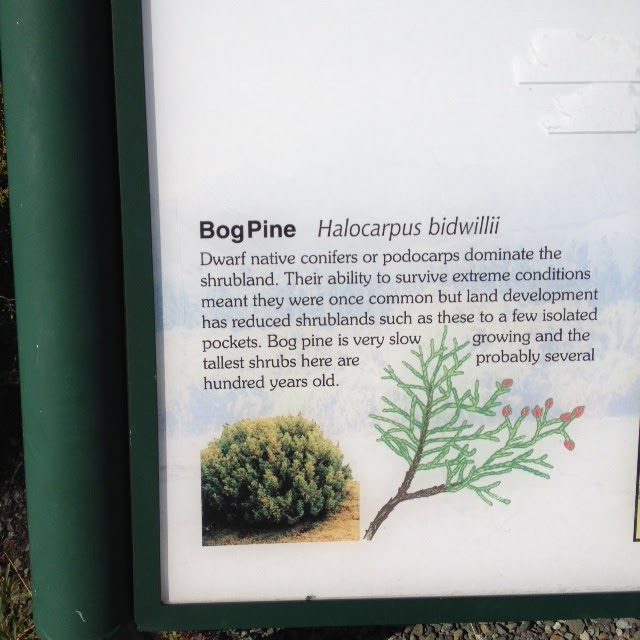 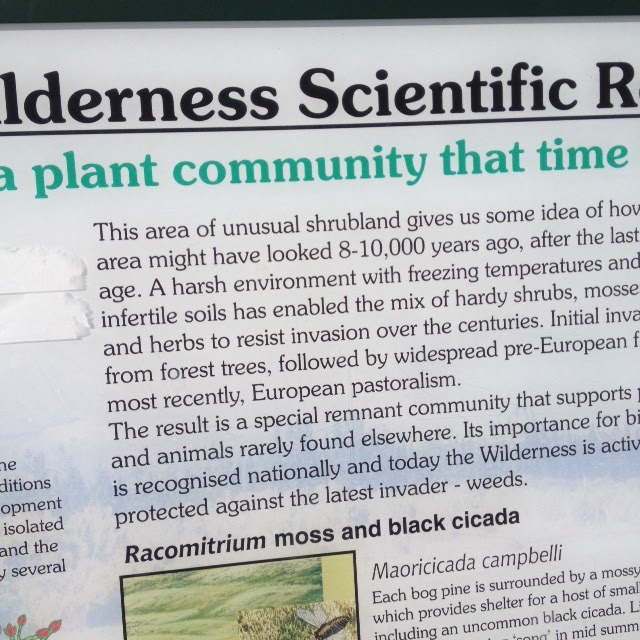 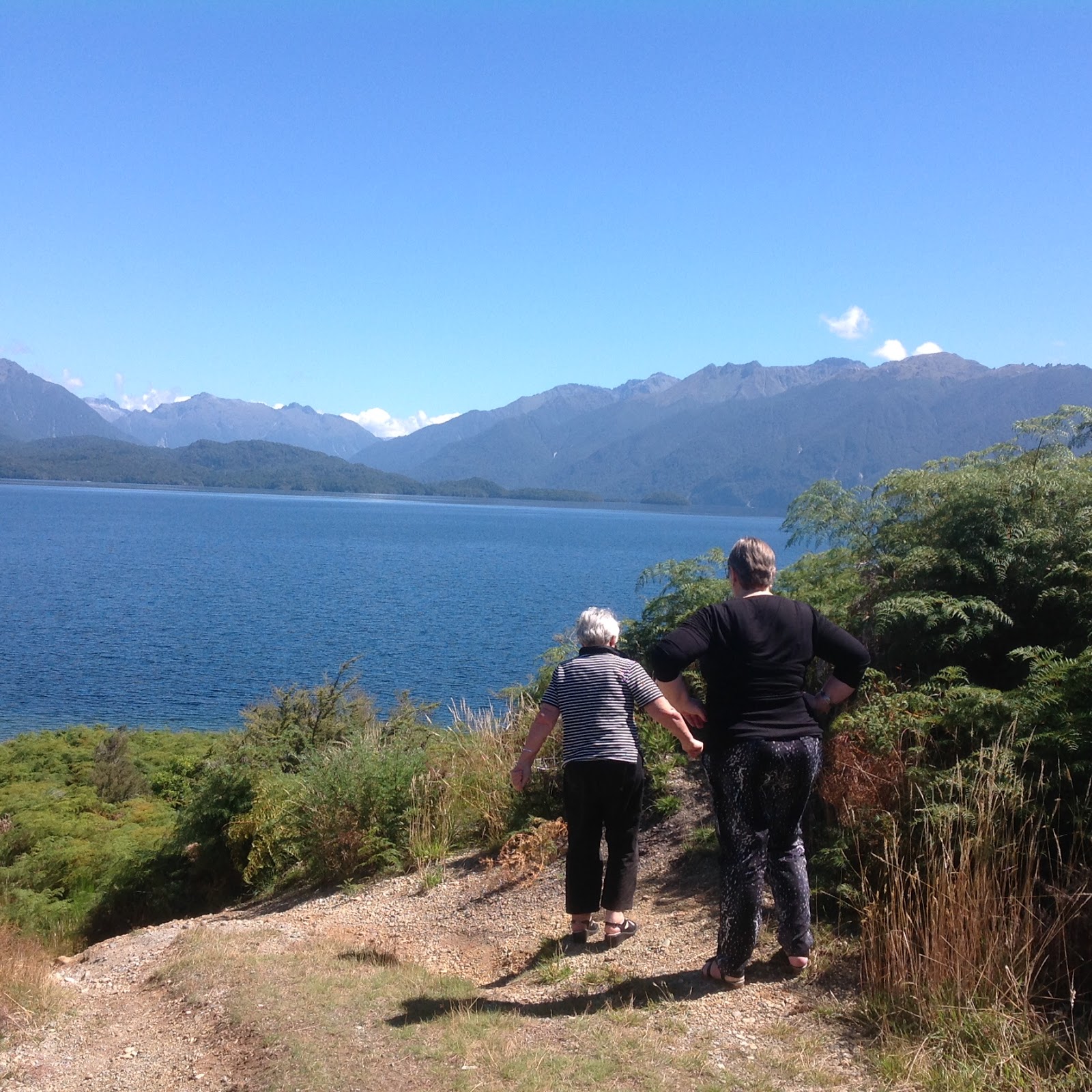 After arriving in Te Anau we quickly settled into our motel (which was a cottage in an attractive setting of trees, but due to misleading information when I'd booked, was short on beds for the three of us. My sister and I were going to have to share a fold-out divan. Our elderly aunty was okay; she had the double bed. Annoying, especially considering what we paid.) Never mind, we couldn't think about that just then, as we were keen to get on the road and travel to Milford Sound and back. 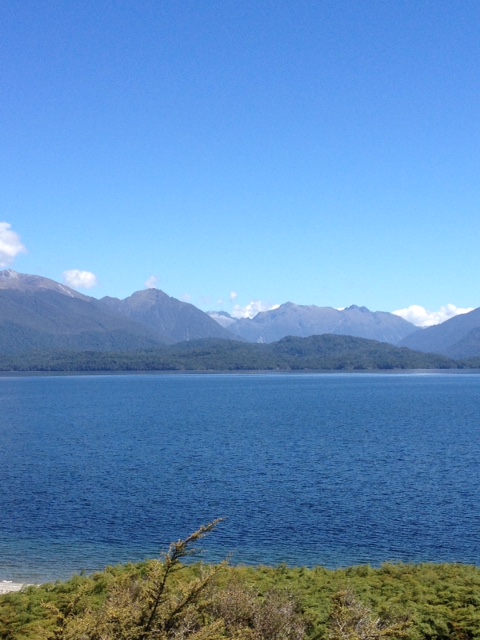 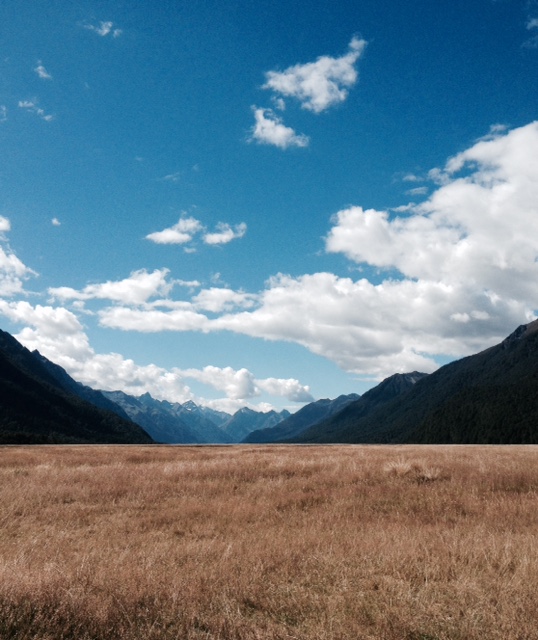 Eglinton Valley - one of my favourite sights on the Milford road. Parts of Lord of the Rings were shot here, but for me, it is land that holds more mana as Aotearoa landscape and home-ground, than as background for a film. 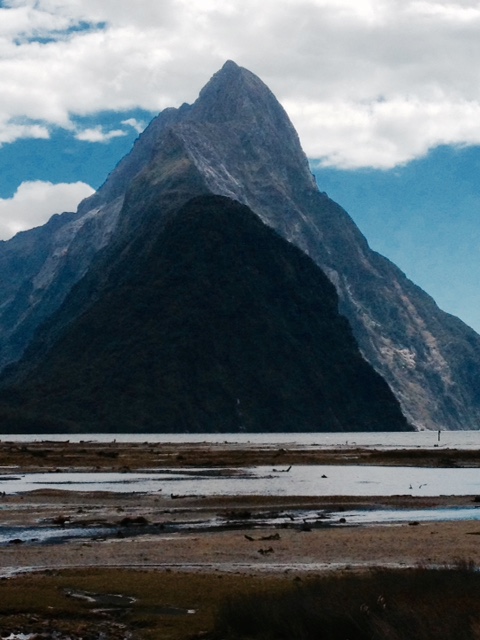 Mitre Peak, Milford Sound - the mountain we came to see

It is always a nerve-wracking drive, the one that takes you through the sheer mountain-face via the rather primitive, rough granite-walled Homer Tunnel, The tunnel was opened in the 1950's. The road through is 1.2 kilometres-long and is one-way.
We were following a nervous tourist who kept putting the brakes on (to add to the anxiety, the road bends and goes downhill) which was frustrating my sister's desire to reach the other end as soon as possible. Because of the bend, it isn't possible to 'see the light at the end of the tunnel' for quite some time into the journey. (At the back of our minds was that we still had the return trip to make).
At least now tunnel traffic is controlled by lights at each end and the road is sealed. When we went through it as kids with our father driving, it was a gravel road with no guarantee that you wouldn't meet a vehicle coming in the opposite direction; you just had to trust that drivers would obey allocated times on the board at each end.
Milford Sound is notorious for sandflies, a tiny biting insect which go for the blood vessels close to the skin - wrists, ankles, hands and faces; causing highly irritating, itchy bites which swell; and turn into sores from being scratched.
There are all sorts of complicated deterrents, such as eating Marmite or Vegemite (a dark yeast-y sandwich spread popular in New Zealand) or taking vitamin B tablets, or mixing dettol with baby oil ... but long-sleeves and trousers are the most effective.
Sandflies really go for the fresh, sweet blood of visitors; probably because over time, residents tend to develop a resistance to sandflies (must be some sort of survival mechanism).
Needless to say we didn't linger, only briefly stopping for a photo and to go to the loo, before we turned tail and set off for the return trip back to Te Anau. 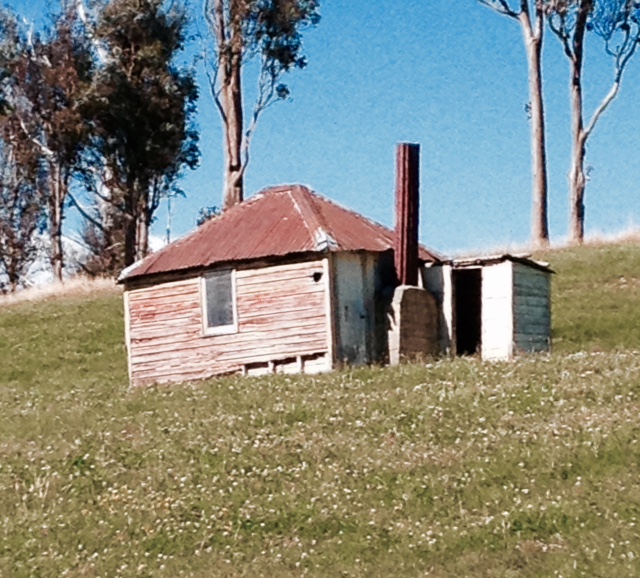 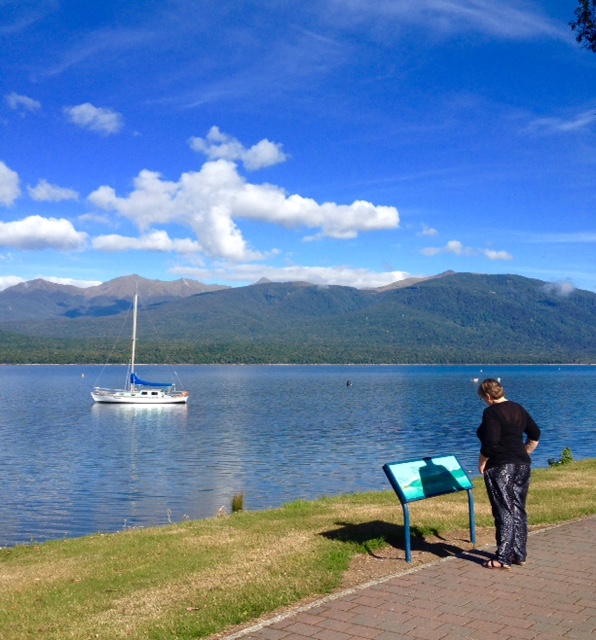 Next day we strolled the shops and waterfront, stopping for morning-tea in a cafe playing lively South American music (we asked what the music was and were told by the Italian waiter that it was Chilean, as the place was owned by Chileans). I just love how cosmopolitan NZ is.
We then set off for Lake Manapouri, which is just down the road from Te Anau, stopping on the way at the bird park. (Peaceful and interesting). 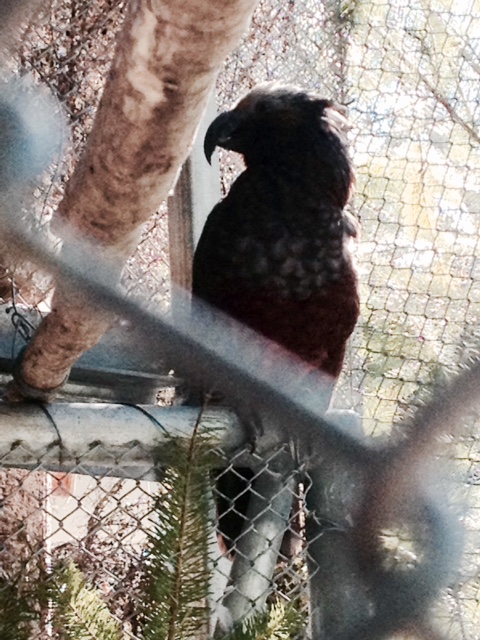 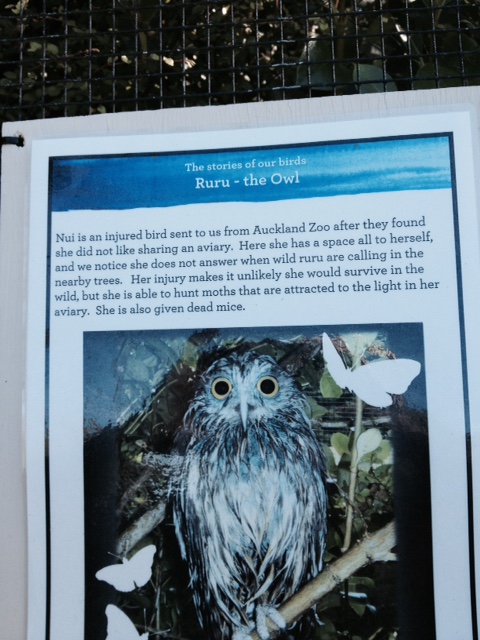 couldn't spot her - probably asleep inside her hollow log - but the info. on New Zealand's little native owl was interesting 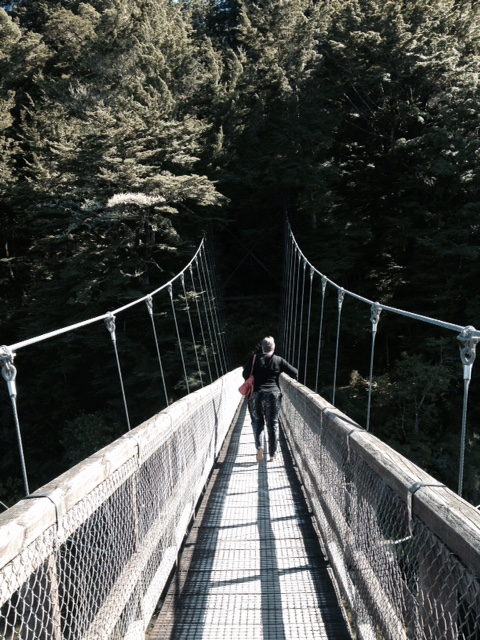 my sister overcoming her fear of bridges ... especially swing bridges ...


No surprise really but this trip was starting to become all about mountains, lakes and rivers. All about our turangawaewae. 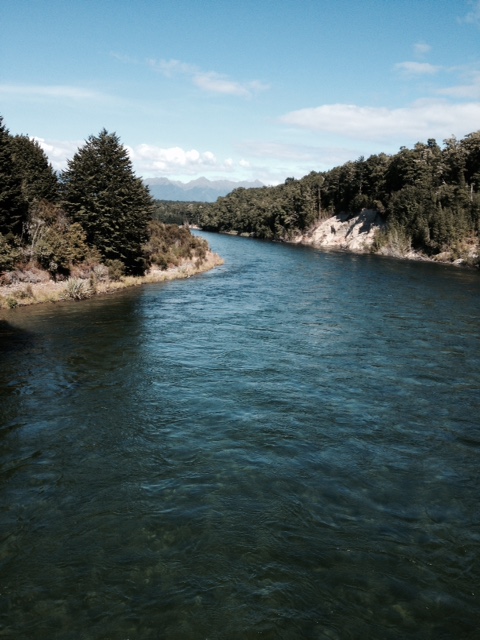 just as the Takitimus are our maunga, the Waiau is our awa (river) Here at Rainbow Reach the Upper Waiau leaves Lake Te Anau and enters Lake Manapouri. Love its strong, deep green. 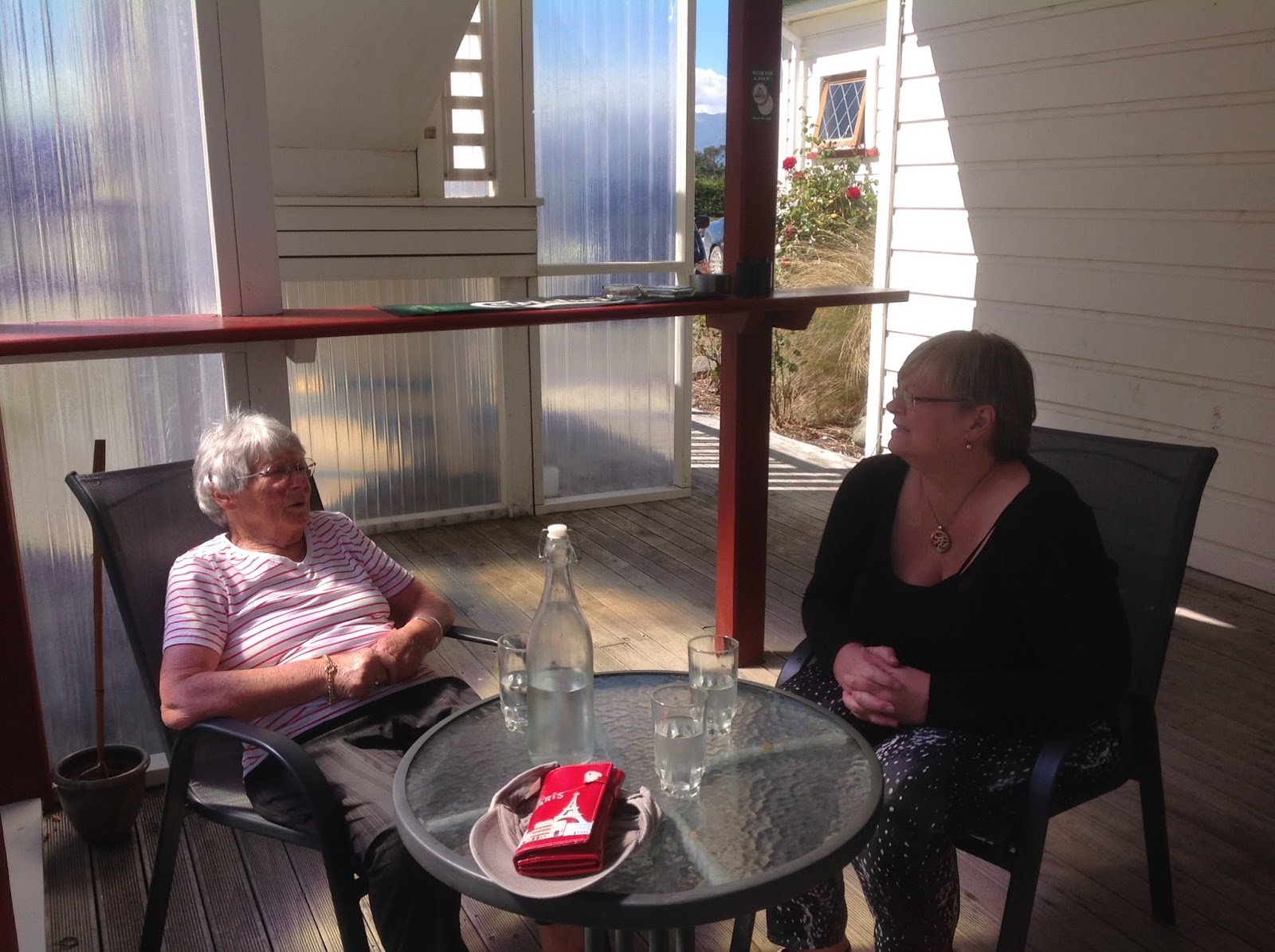 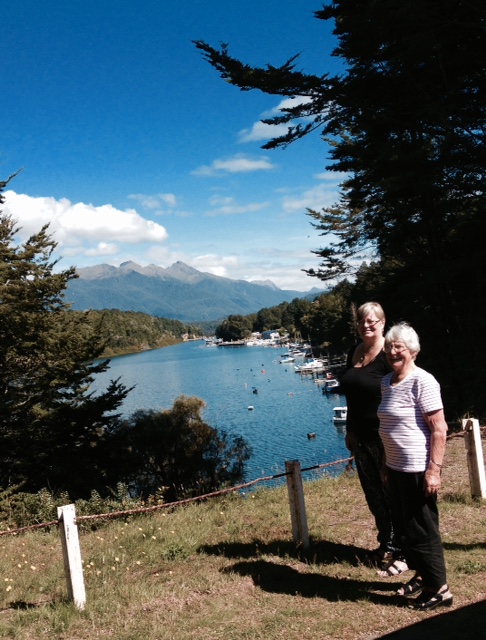 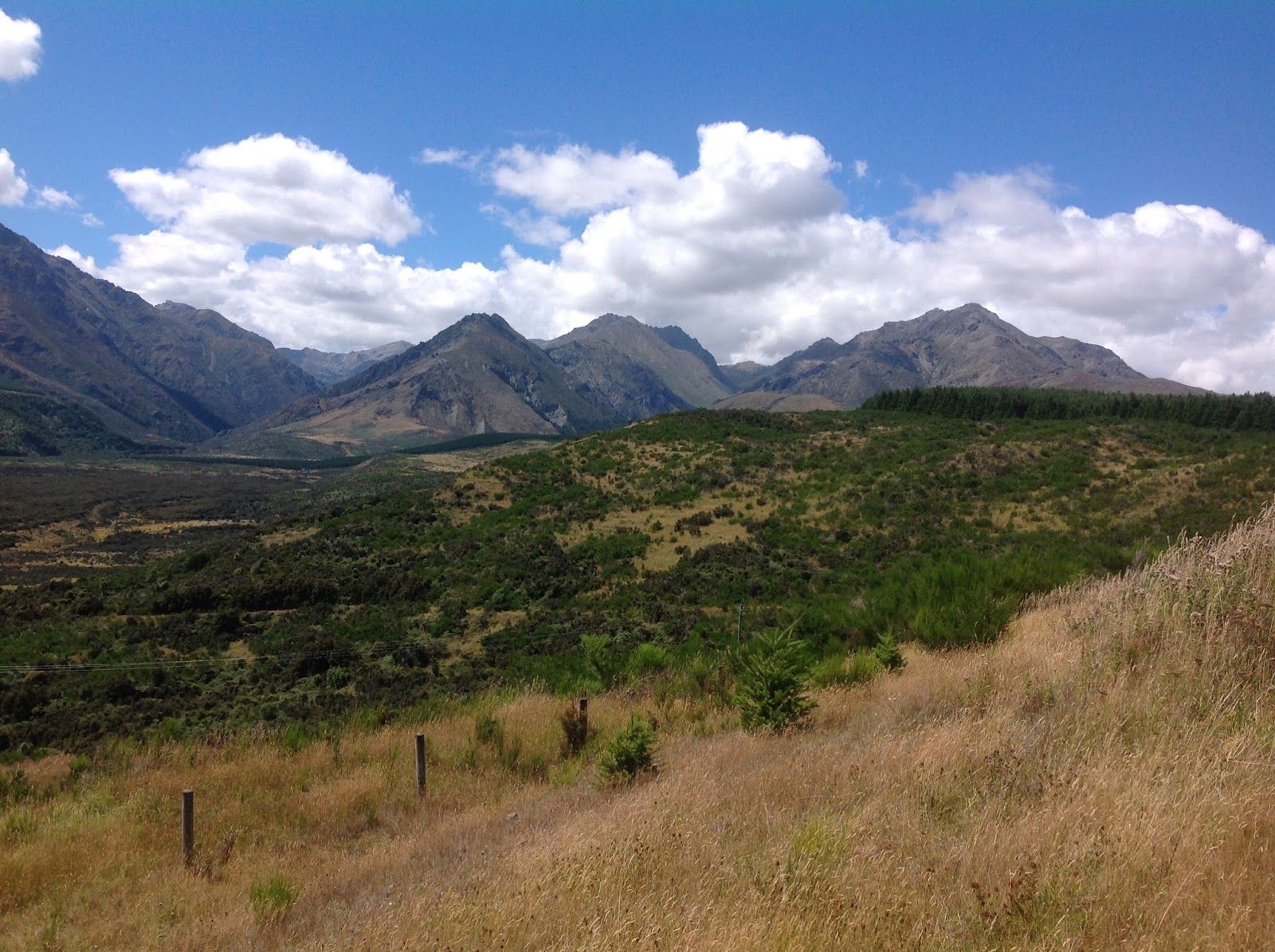 Takitimus, on the Blackmount road

kay, what a breath of fresh air for my snow logged lungs!

the clouds and skies are glorious. the iPhone has in a way ruined the higher quality of my picture taking because it is so easy and the photos are pretty darn fine. i tend not to take my canon with me as i've always done.

sandflies. i know them well, and they hurt!

Thanks kj - it was a indeed a lovely time. Nice to have the photos to remember it by. A special time.

Ah so many memories. A great telling of your trip so far