Last entry re my road trip and then I will stop boring you! 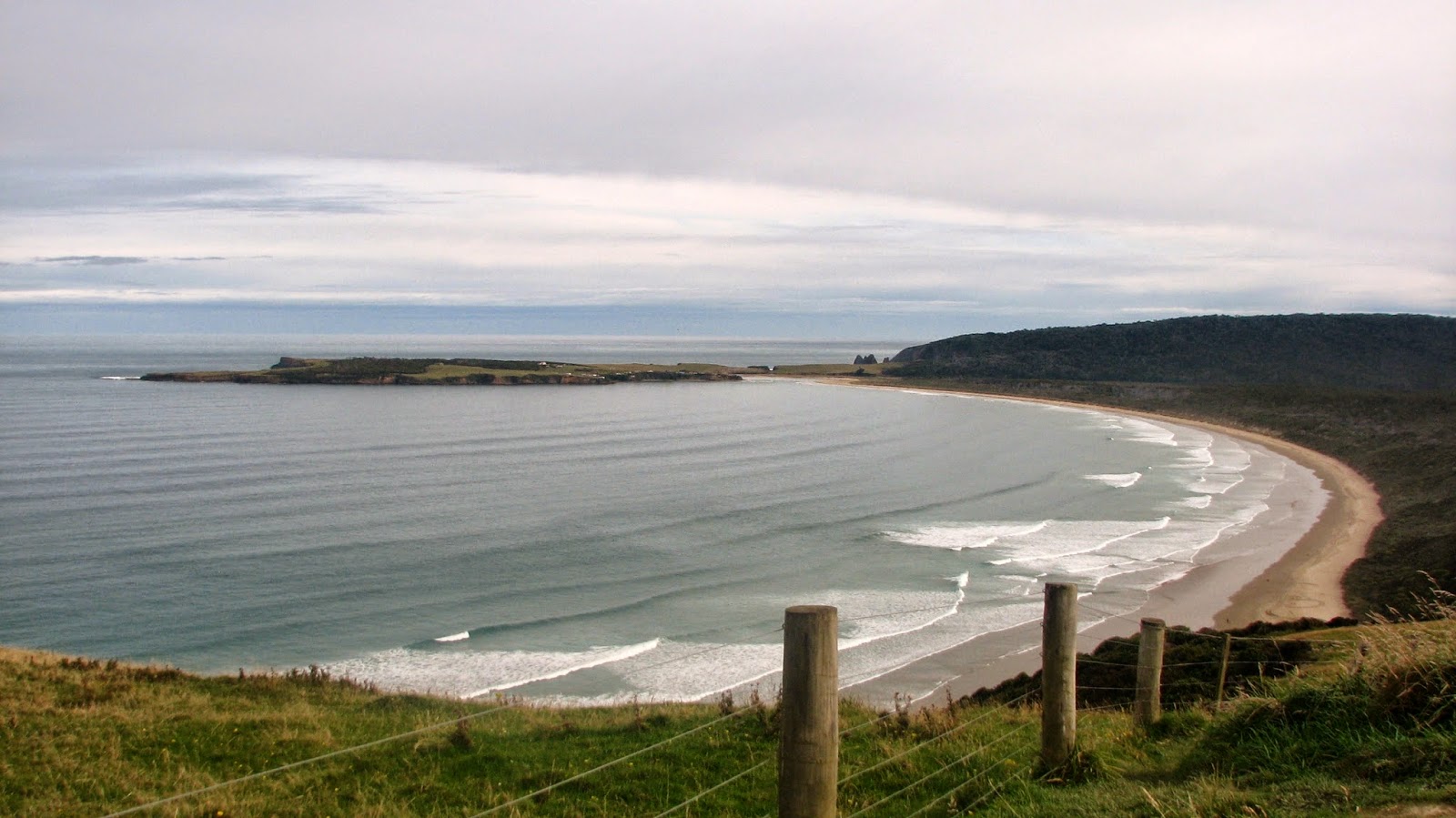 By the time I'd reached my third solo day 'on the road', I was ready to stop somewhere for more than one night. I was looking forward to a two-day spell in the forest with the beach a stone's throw away. I was heading for the Catlins, turning the corner at Invercargill and heading east.

The night in Te Anau had been pleasant enough (great to walk by the lake and acquaint myself again with Te Anau's magic) but the motel's frugal approach didn't really go down too well with me, considering what I was paying. Not top dollar, but enough to expect a little more luxury than it was willing to give. Maybe they thought that having a lake-view makes up for only allowing one hour's internet, no Sky TV and a bathroom dating back to the 70's. It was very clean and tidy and I would normally accept those things, but not when you are paying over one hundred dollars a night. 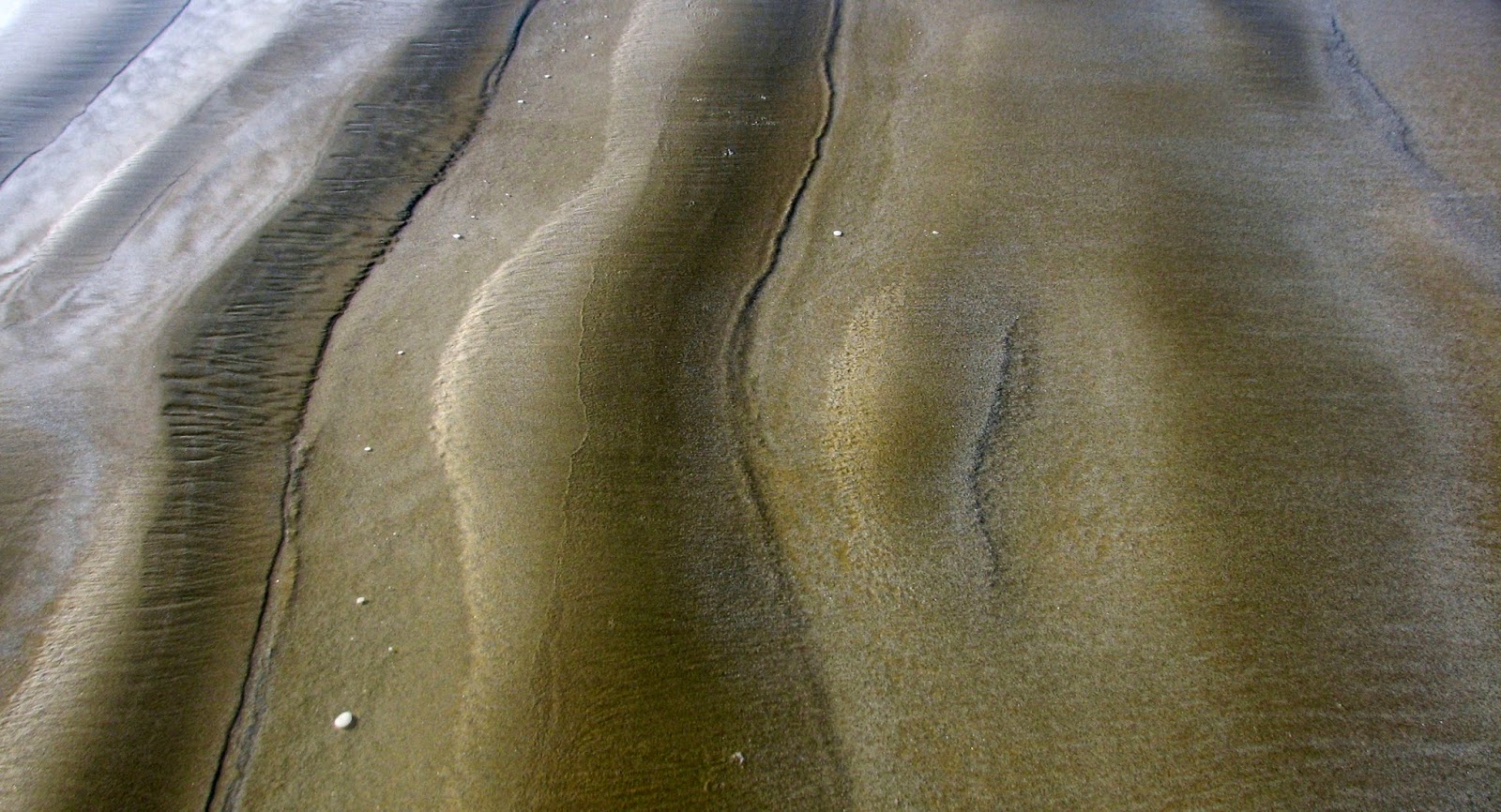 patterns on the sand at Kaka Point beach

My third day on the road started with me struggling with the effects of not getting a good sleep in Riverton. I was staying in a nice little ensuite unit at a small camping ground. No problems there. It had an oustanding shower! I liked the manager too - a chatty, friendly elderly woman who reminded me a bit of my mother. (I guess it's the Southland-flavour some people have). And the price was almost half the price of  Te Anau's motel. It was very comfortable and I was looking forward to settling in for a good long sleep. Until my neighbours in the attached ensuite arrived and I realised how thin the walls were. 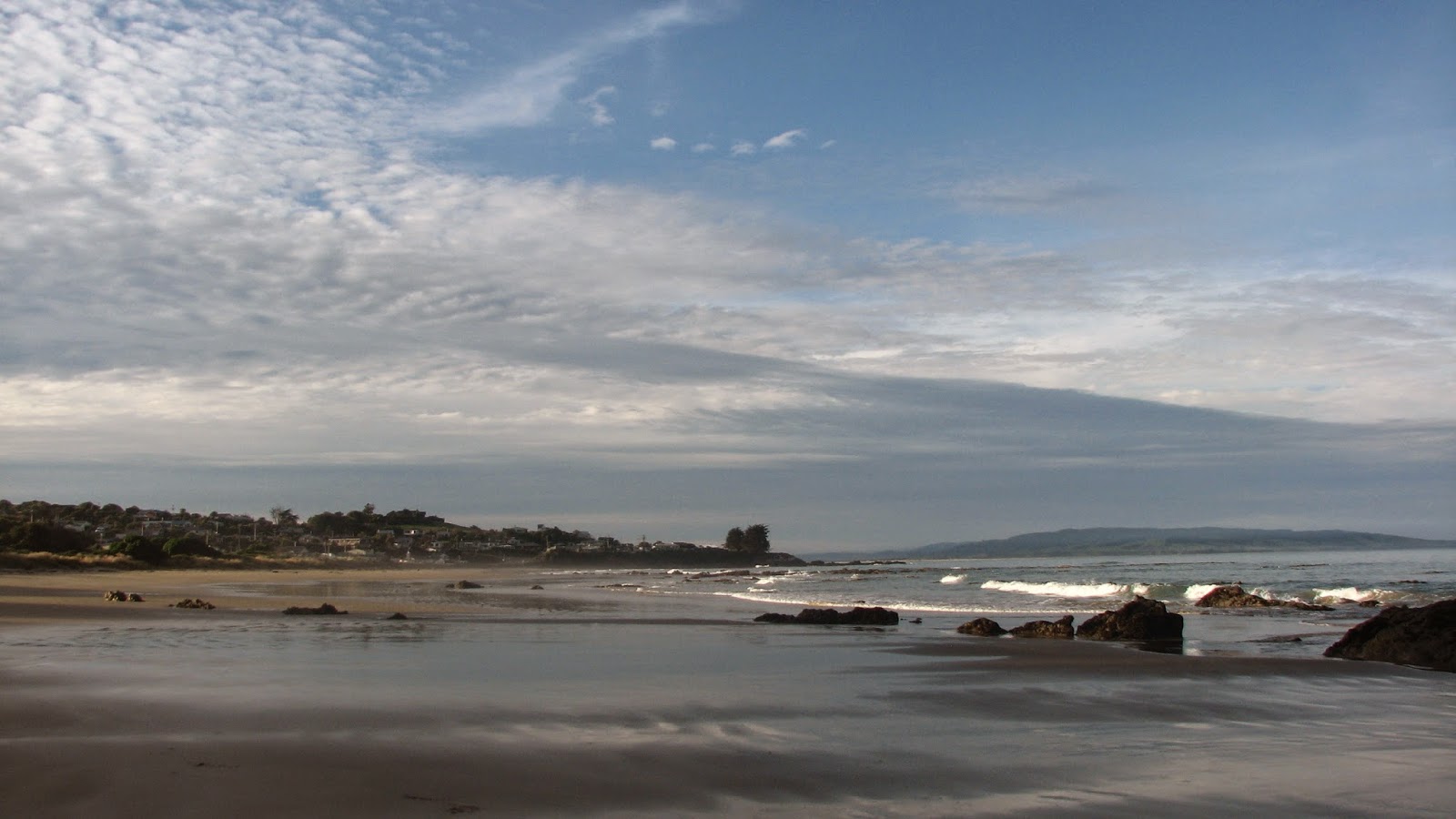 They talked on into the night. There was no laughing; it was all pretty intense. I was on tenterhooks waiting for the outbursts of shouting I thought were going to occur at any moment. His voice in particular was a deadly drone I couldn't stop hearing once I'd turned the TV off to settle down for some sleep. I couldn't hear what they were saying, thank goodness, but there was still the constant, annoying, monotonous grumble for me to try and drown out.

I turned on the little radio that in an inspired move I'd included in my luggage, stuck on the headphones which I'd also thought to pack, and tried to let the late-night radio stations block out my neighbour's voices and soothe me to sleep.

It did succeed in cutting out his persistent bass, interspersed by her whining alto; but didn't send me to sleep.

FINALLY they stopped their into-the-night deep and meaningful.

My planned early start had been kyboshed by the need to sleep late and I woke feeling decidedly out of sorts. It was already 11.00 a.m. when I headed for Invercargill and brunch at Zookeepers, where toasted sandwiches are still called mousetraps. (None of this panini malarky).

However, just as I was about to leave Invercargill, I received a call on my phone from the camping ground manager. I'd left my phone charger behind. Probably the most common mistake of any traveller.(Well, this traveller anyway). There was nothing for it but to turn around and make the 30-min trip back to Riverton. An hour later, charger safely aboard, I looked at the maps we have in the car, trying to work out how to get out to Fortrose from Invercargill. I haven't got the world's best sense of direction, but better signage surely would have lessened the time - it took me nearly an hour. Invercargill; you need more signs pointing to places beyond - especially East. I would have welcomed a clear signpost pointing to Fortrose.

Eventually, a very large, clear, bright sign informed me I had entered the Catlins. Hmmm, yes, all very well, but why did I feel like I'd been put through some sort of intelligence test (at which I'd dismally failed) to get there? I almost expected to see the word, Congratulations! 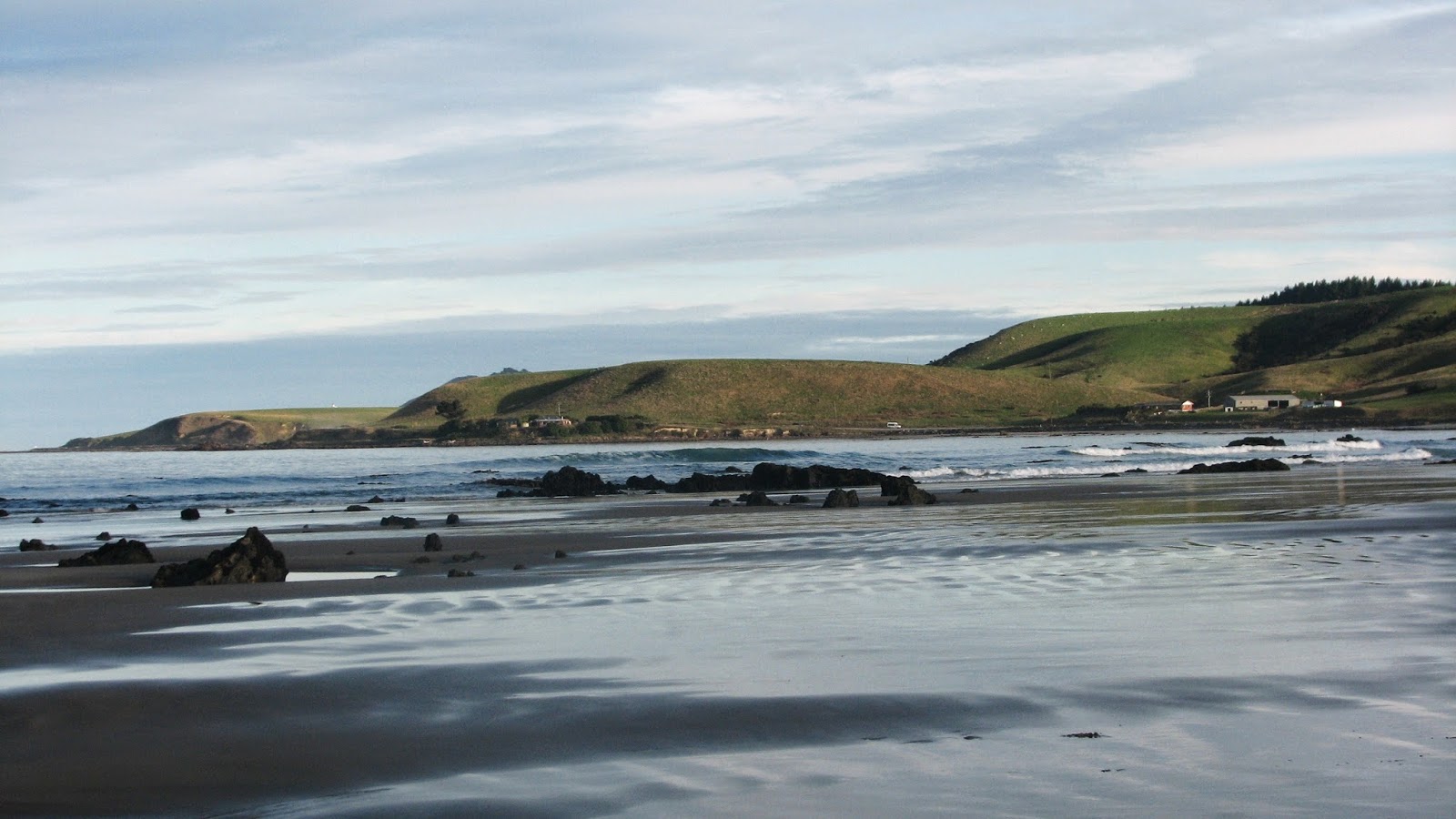 By the time I reached my destination, I was weary. I had no time to take the coast route, so the trip wasn't as interesting as it could've been. I'd not allowed myself enough time. That will have to be another trip.

The weirdness of travelling alone had also increased. Sooo, when I couldn't find the guy who had the key for the Lodge I'd booked into (and no phone coverage to read the instructions for collection that were on my phone) it all became too hard. I decided on the spot to simply head back home to Dunedin. It would mean another 2 hours travelling, but now that my  nose was pointing towards home, there was going to be no turning back.I was too near home and the temptation to flee the scene was too strong. (Proving again that by nature I am a bolter).

Fortunately, Kaka Point was on the way to Dunedin. I stopped off there for a welcome barefoot stroll along the beach. It was a much-needed salve for my jaded nerves and dispelled any feeling of being lost in transit. I felt grounded once again. I stopped at Owaka for dinner where I was served by an earnest young waitress who deserves top marks for her Girl Guide approach to service. However (yes it had been quite a day for the 'howevers') I was served a souless, over-priced beef-burger which consisted of a too-toasted bun soaked in mustard sauce and a couple of pieces of tough beef, all questionably embellished with limp lettuce and too many deep-fried potato chips. The meal was cooked by a cook (again, spectacularly young) who may or may not have been suffering from what the night-before had inflicted upon his person and demeanour. I didn't have the heart to complain to my fresh-faced waitress. When she asked me how my meal was, I choked back the truth and found in me the necesary kindness to muster up a (albeit rather strained) "Good, thanks". 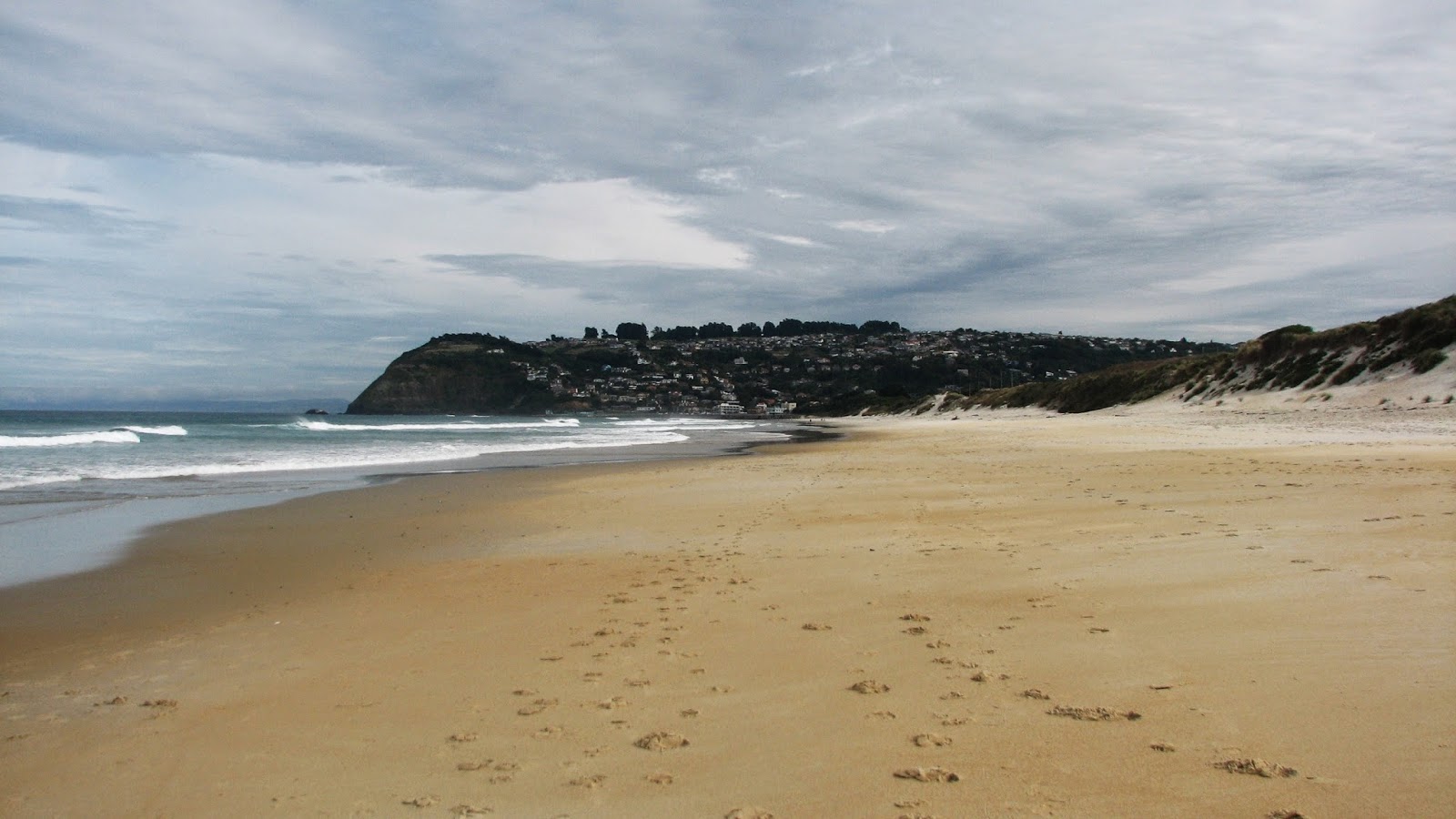 back to the golden sands of St Kilda beach

Aggie-cat was pleased to see me when I got home. I gave Ruby a pat too when I turned off the engine. She did me proud. All told, we'd been on the road for over 8 hours that day.

Over all, the trip away was great. The time with Chris and Jenny in Queenstown, definitely the highlight.
Having a coffee at 'Aunty Mary's', very, very special.

My writer's tank is full. To the brim. Many impressions, much inspiration  ... I'm ready now to use it all up by writing, writing, writing at a hundred miles an hour. (After another walk along the beach. My beach, this time). 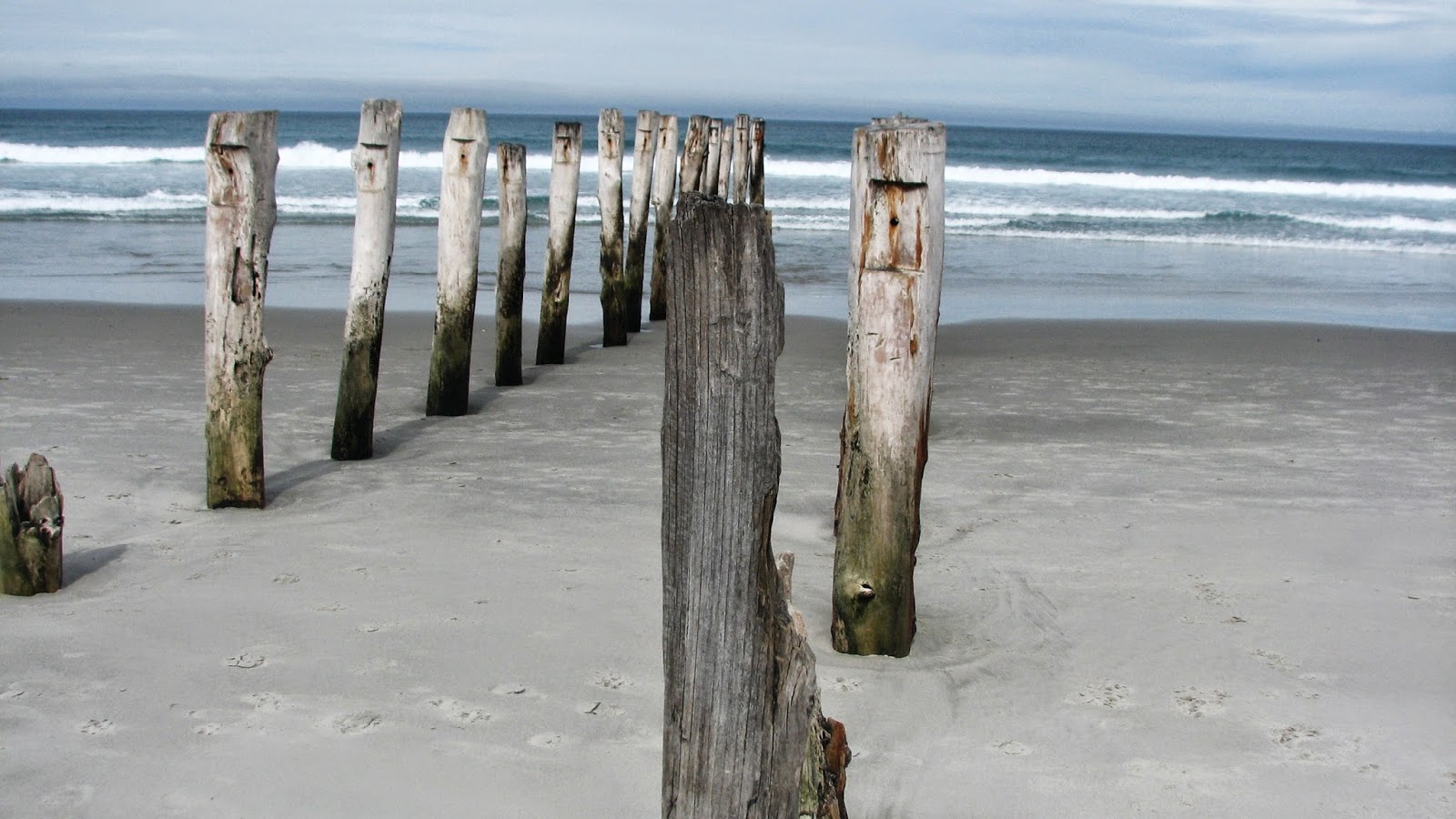 I love your photographs! But next time you're heading Te Anau, let me give you the name of treasured friends at Manapouri. They have the most beautiful little cabin out on their farm and Hunter and Claire are simply magic. You would have loved it. I found myself wishing I could have roadtripped with you. Well done ... and Kaka Point was an inspired stop xx

Di - Thank you! Oh yes, next time I will be getting in touch with you for sure! As with all expereinces, you glean things from them and nothing is wasted. I did have an amazing time after all is said and done - I did do a bit of griping in this post, but I think you have to be honest and not gloss things if there was in fact a thorn in amongst the daisies! Yes, Kaka Point is one of those healing / soothing places. Thanks again, you are a true friend. :)