Some of my favourite things about Munich are the amount of delicious bread and bakery shops, the coffee, the sausages and the beer. The outdoor eating places. The biergartens. (Loving the company of others to drink beer with at outdoor tables, under the shade of chestnut trees, is so Bavarian!) 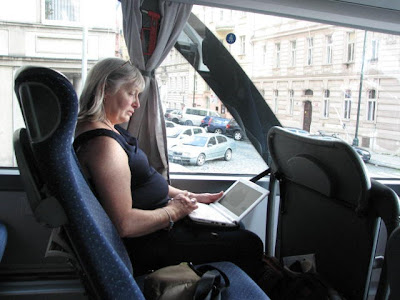 We left Prague for Munich on a bus - express coach on the motorway and in six hours we were there. Such an effective, painless way to travel. 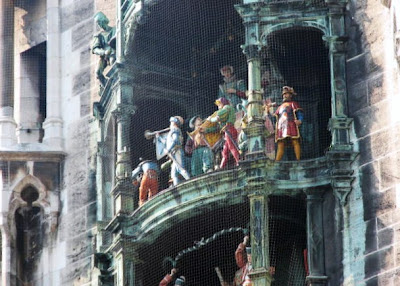 As promised - this is Munich's clock and unlike Prague's astronomical clock it delivers  - music, movement and interest. Because Chris has trained to be a Munich guide, he was able to tell us the story behind the little play we saw the figures performing. Very cool. 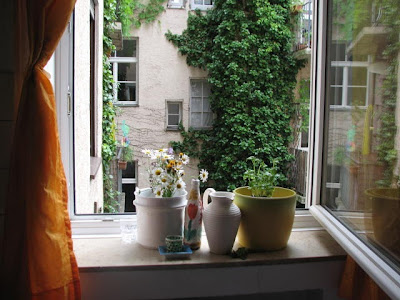 Munich and Kyoto are my favourite overseas cities. 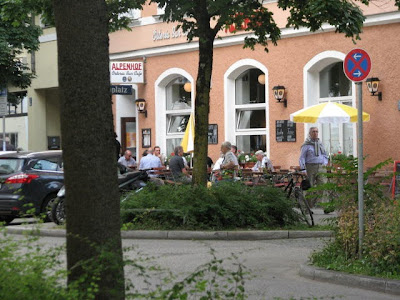 Ok let's take a moment to think why I love both Munich and Kyoto:: Apart from the obvious - the fact that we now have sons and their partners living in these cities - I think the appeal lies in the compactness of the neighbourhoods in both cities; the interest, colour, life and history around every corner. Of course this nearness and abundance of amenities has a lot to do with population. In Dunedin we like space and we can have it because there aren't many people living here. Dunedin felt empty when I got back - there seemed to be too much space. Another thing; my home town (lovely though it is) isn't as conducive to hopping on to a bike (no helmet required) with a basket in the front in order to go buy your bread. Instead we hop into our car. 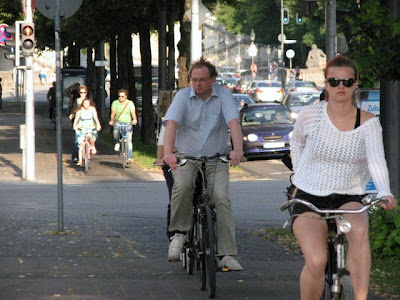 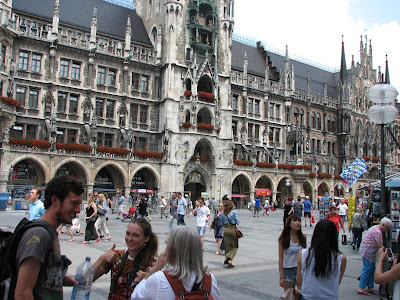 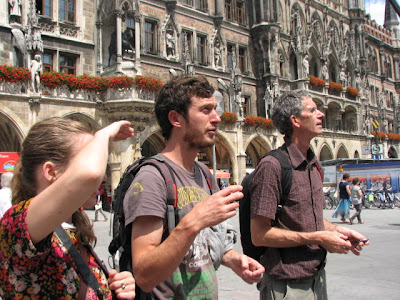 We benefitted from Chris' brand-new knowledge (attained from a lot of reading and swotting up) of Munich and its history. 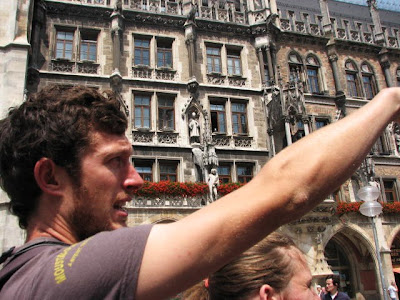 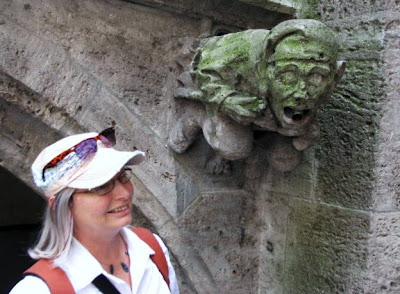 I liked the little jokes Chris slips into his talks ... not too many and not too cheesy - just enough to be a surprise when they arrive. 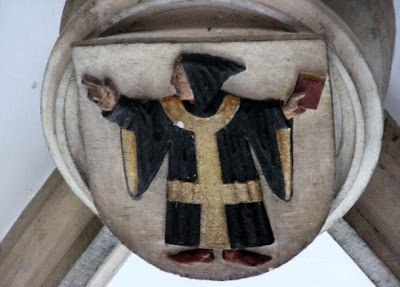 Munich in German is Munchen; which means little monk. The story behind this is too involved for this post, but it is very interesting. (If you are ever in Munich, I can recommend a good guide who will tell you all about it). 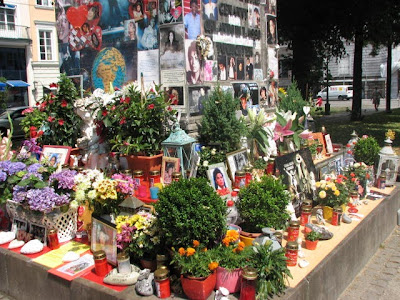 One of the more unexpected sights, was this monument to Michael Jackson ... 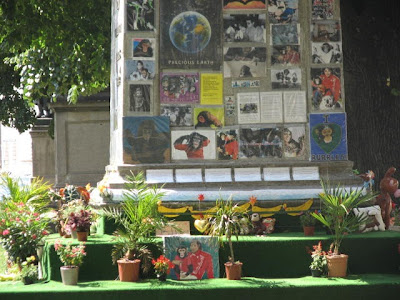 As well as the guided tours through Munich, we spent happy times with CnJ in biergartens, walking through part (a small part) of the huge, huge park (called English Park) where most of Munich seemed to be out enjoying the summer evenings, eating German food bought at markets or small food outlets, shopping a little bit (I bought my birthday-present-leather-jacket there) and going to the ballet. 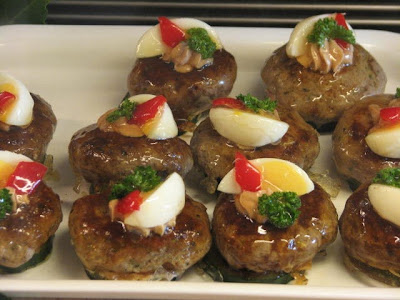 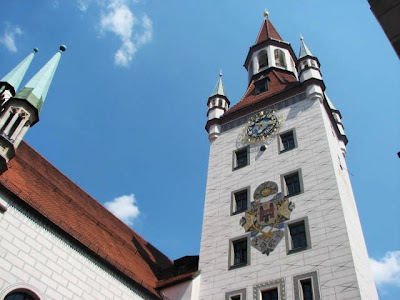 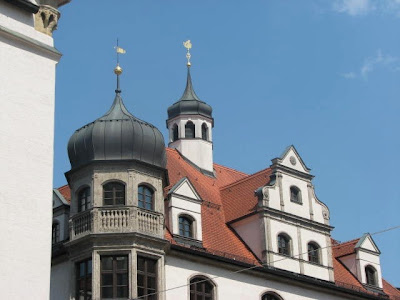 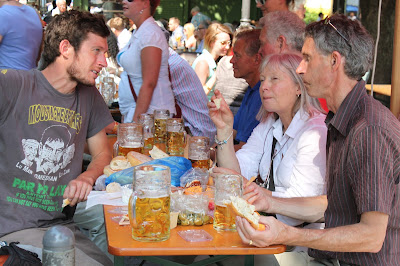 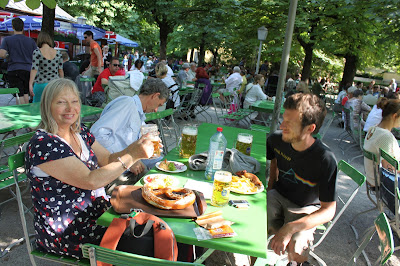 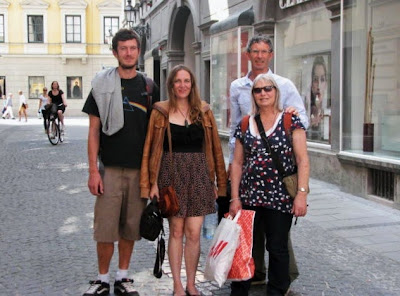 In one of those shopping bags, my new leather jacket.

Here we are standing in an alley that is one of Munich's many quiet reminders of the time of the Nazi rule. The gold-painted bricks you can see on the path behind us, are in memory of local Munich people who were either shot or dispatched to concentration camps, for ducking down this alley in order not to have to 'Heil Hitler' at a sentry post farther up the street. 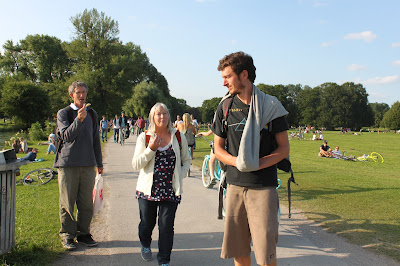 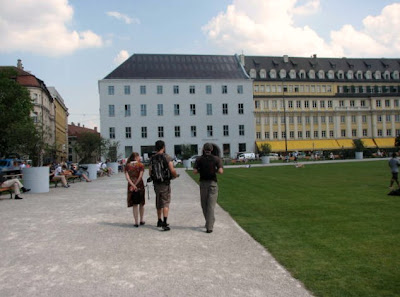 Munich is definitely a city I want to go back to. 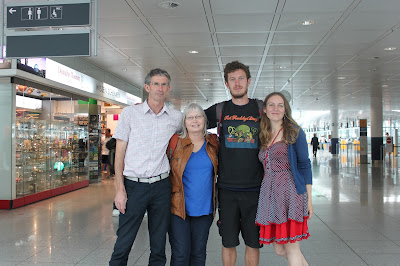 But all too soon it was time to say good-bye (and I didn't even cry!) to Chris and Jenny. We were now off to visit Steve and E. and family in Kyoto, Japan.

Kay, I lived in Germany for two years and Munich was the big city . I enjoyed this passage way with you very much

Very enjoyable mini-holiday, as usual. By the way, Jenny takes wonderful photos of you. Really captures your quiet beauty.

Katherine - Thank you :) You are very kind to say so. Jenny is a born photographer.

eToro is the #1 forex broker for novice and full-time traders.