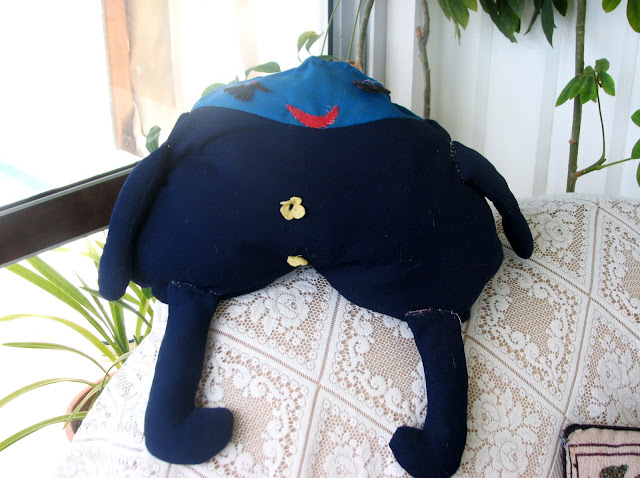 Gonk is happy in a new possie I found for her the other day.  I took her out of the dim corner she's been in and placed her on the back of Nana McLeod's old armchair, in the sun.

She's made from  a scrap of navy-blue crimplene - a very popular material in the 60's & 70's.  [From Wikipedia:  Britain's defunct ICI Fibres Laboratory developed the fibre in the early 1950s and named it after the Crimple Valley in which the company was situated. Crimplene was used in garments that required a permanently pressed look, such as skirts and trousers.]

Crimplene is no longer popular - it has gone the way of knitting machines and preserving.  It wasn't a very nice fabric anyway - kind of scratchy and a bit smelly as it didn't 'breathe'.

I do remember a crimplene dress I had though that I loved. It was made by my penfriend's aunty and sent over from Britain. It was light-green with a white lace peter-pan collar. Very Mary Quant.


I notice Gonk's legs are facing the wrong way and I also see that I didn't match the cottonto the material, so it is possible to see my very rough hand-sewing.

Also from Wikipedia: 'A gonk is an egg-shaped furry novelty toy with googly eyes and small arms and legs that was popular in the 1960s. They were created by Robert Benson and Sheila Stanton. They were associated with Op art, hep and mod culture.  Gund sold Gonks in the US, including inflatable vinyl versions.  Gonks are also homemade.'

Up until about a year ago, Gonk has been with Mum (left behind there by Jill when she left home).  As Jill's partner will not have it in the house, Gonk has now found a home with me.

Which we're both happy about. I think - although as she doesn't speak, I can only really go by her expression.

Gonks totally passed me by. So I've learnt something new today!
Crimplene is permanently associated in my mind with Skodas and the Social Credit political party. :)

Well...I learned about Gonks and Crimplene!!! Love the Gonk, not so sure about Crimplene! A handmade G sounds so much nicer than a blowup one...and yours is quite adorable!!!

Sue - That is hilarious! Skodas and Social Credit, love it. :)

Theanne - I'm so glad I could inform you re crimplene - definitely the material of the 60's and 70's where I live. :)
I love that they named the material after ... what was it ... Crimp Valley? (I should remember that fact because you never know I might get asked that at a Pub Quiz sometime.)

Theanne - I looked back and see it is Crimple Valley - even better! ;)

I remember crimplene, but did not know it was named after the epynomous valley. Thanks for a bit more education Kay