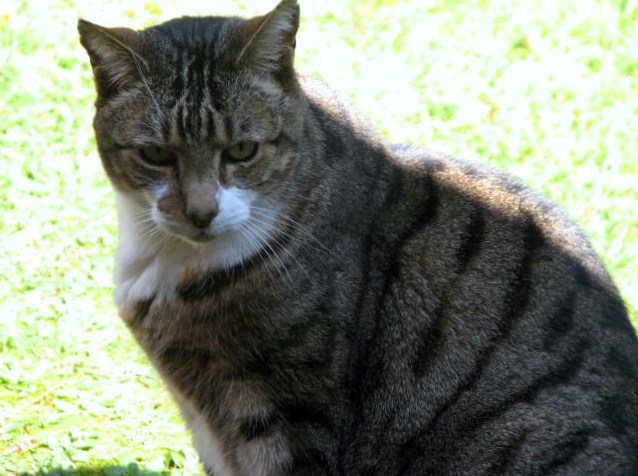 When Grommet (more commonly referred to as Grommy) arrived here as a kitten, he was named by our son Mike, 16 years old at the time.

A  'grommet' is not only the name of a claymation dog, or the small tube inserted into the ears of toddlers with 'glue-ear', but also the nickname for a young surfer.

Mike is a surfer and Grommy right from the start was fearless. Maybe Mike envisioned the kitten riding concrete and ocean with him on his skateboard and surfboard. I'm sure that Grommet would've been up for it.

Grommy is large and fearless, always placing himself in the centre of what is happening. The other day, for example, as we waved off my brother and sister from our balcony, Grommy was there too, his face between the rails watching with interest as their car pulled away. If he could, he'd have waved his paw at them as they disappeared down our drive.

More than once he has been known to happily ride down our driveway on the bonnet of a visitor's car. He has also been found sitting on the seat of a parked motor-bike, ready to roll. 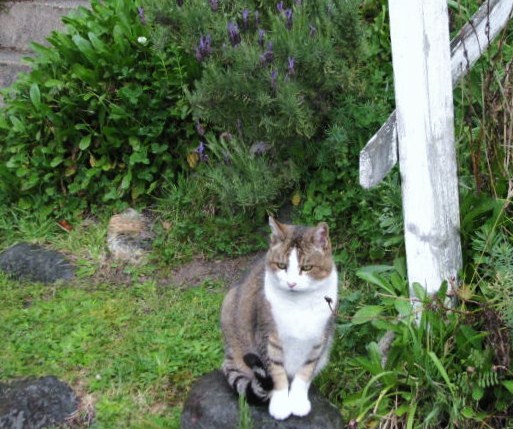 Typical demure Aggie-pose.  Serious, Aggie remains slightly aloof as she quietly considers things, but keeps her thoughts to herself. She is an introvert.

Grommet arrived along with his sister. I named his sister Aggie after great-grandmother Agnes. Both kittens  were from my brother's farm. My sister-in-law and niece brought the whole litter to town and pleaded with me to take a kitten. The kittens, who were sired by a wild tom, were sentenced to die. My animal-loving niece was beside herself. When I said we'd take two, I've never been hugged so hard!

Aggie, demure and ladylike, is a lot less high-maintenance than her more demanding brother. She will
calmly and daintily pat down a cushion from wherever it is placed and mould herself a warm sleeping place for the day. Grommet on the other hand will follow me about, talking and demanding attention and when walking ahead of me down the hall, purposely  set the pace (slow) and force me to keep behind if I don't want to trip over him.

When we have people here, Aggie is more likely to disappear, whereas her brother will lie down in the middle of the room and expect lashings of admiration and attention.

Both cats are 14 years old now  - the same age as granddaughter B. who as a baby, loved to crawl around after the two kittens. 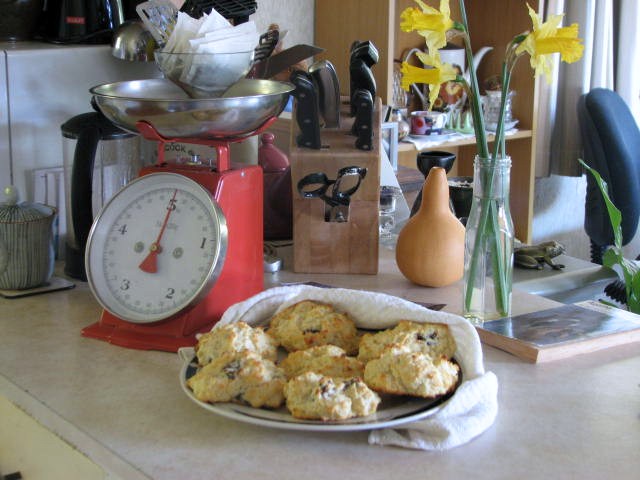 I used the tasty dates given to me from friends over from Saudi Arabia. The dates were wrapped up in their own packet, like a boiled lolly, but much healthier. I had to unwrap each date and remove the stone. 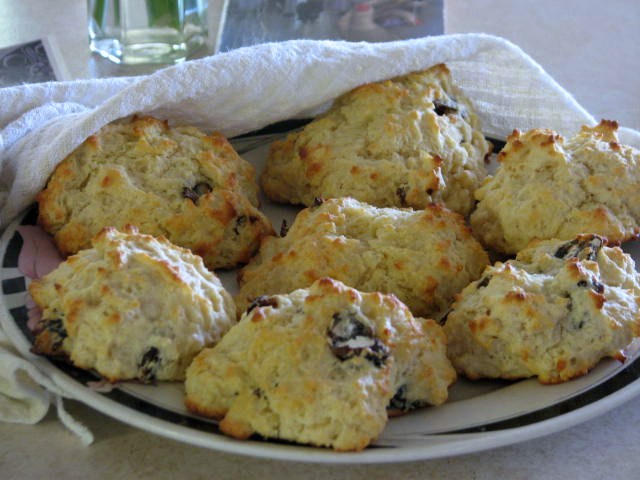 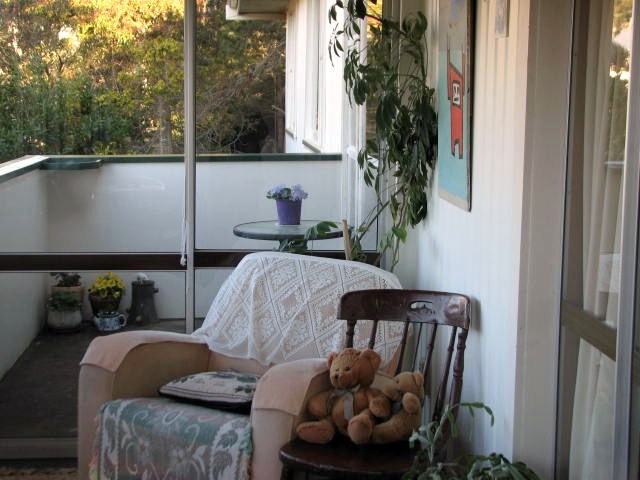 With the longer days and warmer (negligibly) weather, the inside becomes less of a focus and outside more inviting. 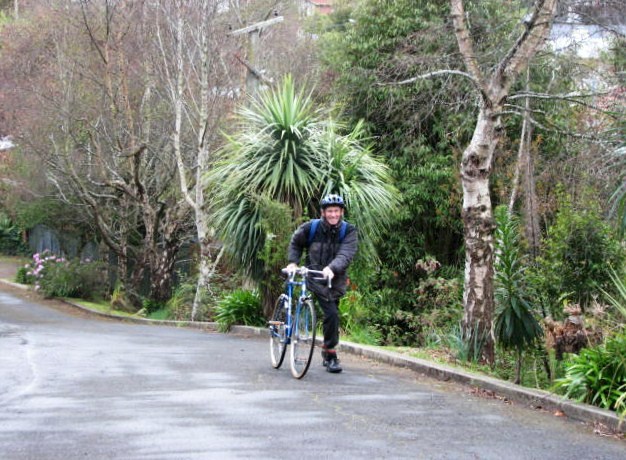 Robert nearing the end of a bike-ride home from work. As he would say, one of us has to work. I guess not  all of us have the luxury of stoning dates and pondering the personalities of cats.
- September 26, 2012

Date scones. Genius! Damascus meets Dunedin. I hadn't even thought of it. They look wonderful.

I think the personality of cats is an entirely valid subject for lengthy rumination.Grommet and Aggie would possibly argue that it is the only subject appropriate for humans.

Enjoyed your post, Kay.
I loved hearing about your cats and those scones look scrummy!

Katherine - I thought of you and John each date! Yes, you're right about the cats, they're notoriously self-involved creatures.

Sue - The scones were gone in an instant!

I miss having a cat; its one of the first things on my list for when we get home to NZ.... after finding a house to live in :)

Those scones look tasty and that armchair, next to the bears, looks like just the spot to sit and enjoy one!

what a fun post! i can just see you trying to walk down your hall, balancing respect with efficiency! grommy is clearly a character. extra hugs for adopting two.

so your weather is warming. i just love knowing that as the falling leaves here warn me to prepare for frost.

i plan to make scones now, kay. you are a good influence :^)

loved your post...kitties and dates...two things I enjoy! thank you for your words of wisdom...don't know what happened... one day I just didn't want to take more photos, didn't want to draw or paint...just didn't want to do much of anything :( I'm such a silly goose...some of the time, well most of the time these days...perhaps if Don and I had not done EVERYTHING together...work, play, travel...from 1983 til 2009 we just weren't apart except when working or he was in the hospital...and when he became bedridden we were only apart a few hours each week when I did things away from home. I have no complaints about that...I wanted to be with him...but it definitely makes it harder now. I'm not a person who lets go easily...never have been, never will be...case in point...I stayed married to my first husband for 17 years before divorcing him. Oh and did I mention that I'm STUBBORN :D maybe you guessed :D anyway the only way I can get through the day is to not think about my Don...but the nights are the stuff of dreams...my doctor would put me back on the "happy" pills...but they take your life away and you feel no emotion. so I take care of Baron and skid through the days

I forgot to mention laughter...I miss it the most

Theanne - It's not easy to lose someone dear and I appreciate the struggle you must be going through to keep interested in life. I hope you can find some laughter in your life; we all need laughter.

I am always finding a personal co-inky-dinky when I read your posts. We have the same color blue glass, our watering cans are the same green and rust, etc. Well, here is another. I had the most marvelous grey striped cat named...ready for it, Mikey. He looked almost just like your Grommet. Mikey was a rounder and liked to wander off on his own then show up for food and cuddles. I wish I had a picture of him to show you the resemblance. Grommit and Aggie seem to be interesting and beautiful friends. Thank you for introducing them to us. Pass me a scone, would ya? I have never had a date scone. Mmmm.

Ooh a cat post. Lovely photos of them, the cats that is. Grommy sounds like a real character.