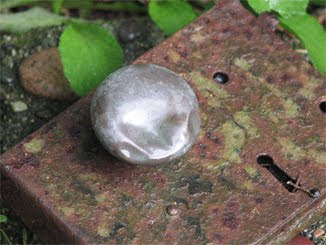 The photo above is of a door handle from my long-gone childhood home. It is off an outside door that led into the front porch outside the kitchen door. How fondly I remember the calm feel of its fit in the circle of my palm. How trustworthy it was, this banged-up doorknob. How gratefully I reached for the entry it allowed me into the familiar from the unpredictable. It's very precious to me this old handle from a door that was never locked.
***

'Spillikins' is another word for the childhood game I knew as 'Pick-Up-Sticks'. (Do children still play that game?) Fellow-writers described Robert Louis Stevenson's ability to write as one who seemed to be able 'to pick the right word on the point of his pen, like a man playing spillikins'. This Friday Dunedin's '24-hour Second-hand Book Sale' opened its doors for the 30th time. I got there mid-afternoon and among other finds, came home with 'Memories and Portraits', a series of essays written by RL Stevenson towards the end of his life.
It's a small, book, easy to hold, with a faded, red cover. The book opens with amusing descriptions of the differences between the Scots and the English (from what I know of the two nationalities, what he has written on the subject may very well still be applicable). Other essays describe Stevenson's memories of being a young student. Although couched in the embroidered tone of the age, he describes much of what faces students of any age - failing papers and missing lectures, the attraction of a charismatic lecturer, the boredom of a dull one, the energy and genius of fellow- students, the sex, the booze and drugs, the exuberance of rebelling against parental expectations and the panic attacks at dawn.
I have picked up one difference though; back in the 19th century there was an expectation that many young people would not live to old age, and it is clear in these writings that as a young man Stevenson, who suffered from fragile health all his life, was haunted by seeing friends die of ill health while still in their twenties and early thirties.
He travelled widely and wrote widely (his most well known books being 'Treasure Island' and 'Kidnapped' as well as 'Dr Jekyll and Mr Hyde'. He also wrote poetry, his 'Child's Garden of Verses' becoming a classic) . Towards the end of the 19th century, he made Samoa his home, building a house and living there with his family. He adopted the Samoan name 'Tusitala' ('Teller of Tales') and became a great favourite of the Samoan people. He died there of a stroke at the age of 44.
This hard-backed book, pre-owned by a 'Frank Denton, 1933' (the name written on the inside cover in tiny, perfect, cursive handwriting making me think that maybe Frank was an ant!) is my door into Stevenson's writing and I'm savouring the writing style of this Scottish writer Henry James described as 'the only man in England who can write a decent English sentence'.
Once inside the door, I've been delighted to discover wonderful writing laced with splendid descriptions, such as the one below of English windmills; an example of Stevenson picking up the right words on the point of his pen, 'like a man playing spillikins':
'There are, indeed, few merrier spectacles than that of many windmills bickering together in a fresh breeze over a woody country; their halting alacrity of movement, their pleasant business, making bread all day with uncouth gesticulations, their air, gigantically human, as of a creature half alive, put a spirit into the tamest of landscapes'. R.L.S. from 'Memories and Portraits' (1887).
***
The fact that I love this description of windmills could be seen as ironic, given that I've written a poem against the farming of them in a specific area. But the wooden, bread-making windmills described here are a far cry from the 21st centuries more excessive ones. (Although, maybe there were some people back in the 18th century who saw the windmills we'd consider now as cute, a grotesque mark on their pleasant outlook ... ) I can't agree with large, electrical corporations plastering landscape worthy of being conserved with a nightmare of super-sonic windmills progressing en masse. (Something I'm sure R.L.S. would never in his wildest dreams have imagined). Ah, progress. Some good. A lot bad.
***
- May 22, 2010

The windmill description throws a new light on modern wind farms today!
A "Child's Garden of Verses" was my favourite childhood book of poetry. I think I still have it somewhere, unless it is at my sister's.

As little girl in the fifties I remember listening to the radio the stories of Tusetala.. Teller of Tales".