We set off for a break-away weekend on Friday night after work. When we went for an early evening stroll from the camping ground where we stayed that night, the soft rain on the warm roads brought back childhood memories of Queenstown for R and summer holidays in Waikaia, Northern Southland, for me. (And playing tennis after tea, in Gore).

As we set off for St Bathans, the wind and rain edged behind us, saying ‘please excuse’ on its way past. The Maniototo landscape was its magnificent self; dry, desert-like land stretching to a distinctive mountain border, the wide sky bursting with blustering clouds fighting a losing battle for their place in the sun.
The small town of St Bathans is a little off the beaten track (and the road we took to get to it was gravel) but it's certainly worth the trip. 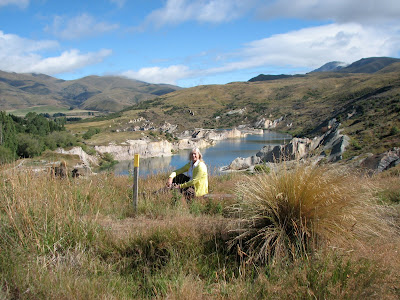 The old gold diggings are testament to the fact that desecration of the land is not always ugly - in this case, nature and weather taking over the remains of brutal, high-pressure sluicing by miners, to form sculptures from the exposed, pale cliffs. 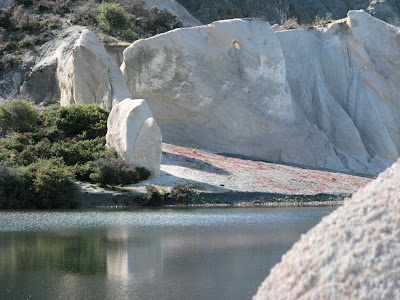 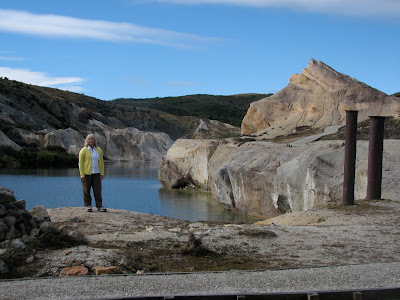 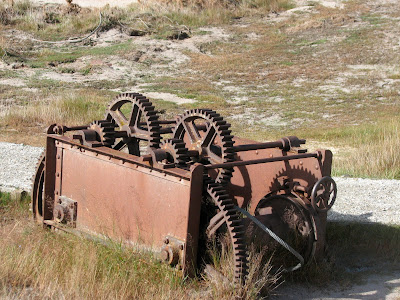 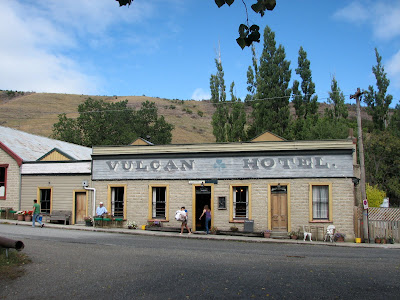 In this photo, Robert is sitting outside the local hotel, known for its ghost. While sitting there drinking his coffee, and as I was taking the photo, a woman went past with the laundry (you can see her in the photo holding a pile of sheets). On her way past the wooden seat farther along the wall, she said, "Hi Joe", to what appeared to be an invisible person. Uh-huh, thinks Robert, she's saying hello to the ghost. Then he noticed that lying in the shade under the seat was a dog (no doubt called Joe).
After leaving St Bathans, we headed deeper into Central Otago, driving past rural settlements newly spruced-up for the tourists and people following the two-or-three-or -four? day long, cycleway along the old railway line. I kept an eye out for Kyeburn* and what I knew was once the country school of a friend of mine, and was rewarded when I spotted the faint, but unmistakable, outline of school-buildings complete with swimming baths. Sadly it now has the glum, run-down appearance that disused buildings take on.
As we drove into the small rural township of Omakau, we saw that their annual A&P* Show was in progress. It didn’t take us long to decide to stop and have a gander. We ended up staying a couple of hours. Long-gone, it seems, are the days of the large A&P shows I remember, ones that lasted for two days with merry-go-rounds, plastic windmills, ferris-wheel and chair-o-plane rides, Miss 'Whatever-Province' competitions, bonniest baby competitions, candy-floss, clowns, ballerina dolls on sticks, highland dancing, wood-chopping, toffee apples, carnies running their suss, evening side-shows and in the Grand Parade, impressively scary bulls and vain roosters, obstinate pet lambs and calves, obstreperous shetland ponies ... However, at the Omakau show, the remnants stalwartly remain. As soon as we got out of the car and smelt horse-dung and heard bagpipes, we knew we couldn’t be anywhere else but at an A&P show. We found pens of woolly sheep, bagpipes, horse jumping, hot chips in a paper cup, and there was even a Grand Parade. As we headed for the car, over the loud speakers came the announcement that the Jack Russell race was about to begin. 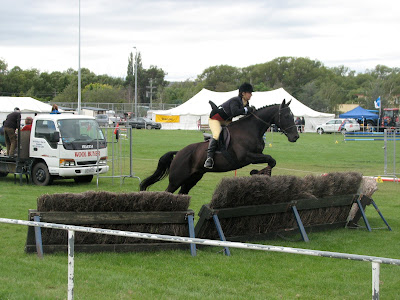 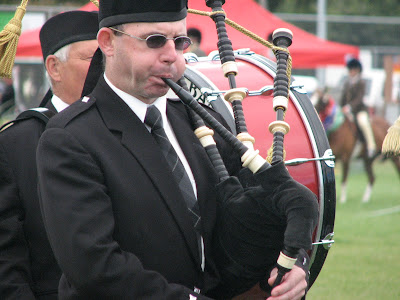 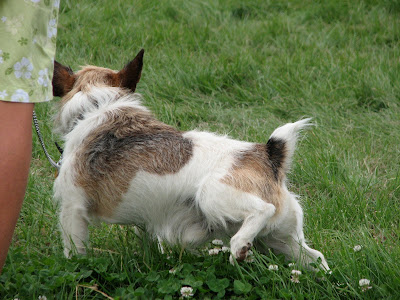 From there we headed for our Saturday night destination, Wanaka's Top Ten camping ground. Past a serious array of business-like vineyards that pooh-pooh any idea of wine-making as a mere cottage industry, we sped, past the long Pisa Range, its trademark, snipped-off tips marking a blue boundary to the west, to sit basking in the last of the sun and eating a tea we made up from what we had left over in the picnic basket and chilli-bin. 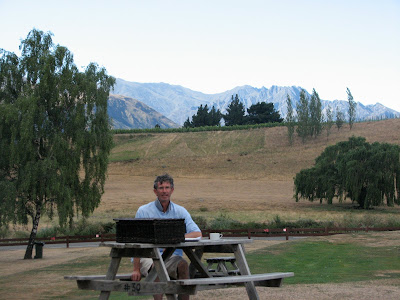 Notes:
*Kyeburn - there is a story (apparently bona fide) that an early settler surveyor (John Turnbull Thomson) under instructions to name the district's creeks, settlements and other notable features, wanted to use Maori names, but his superiors told him that this wouldn't do at all. In a fit of pique, he named them with Gaelic names for common farm animals; hence names such as Kyeburn ('kye' meaning cow) Eweburn, Wedderburn, Hogburn etc ... But the best one of all has to be naming the main road through, Pig Root. To this day Southern Highway 85 is known as The Pig Root. (I just love that!)
*A&P - stands for Agricultural and Pastoral.
- February 13, 2010

It's a great psart of the country ...and a facinating history

You left before the Jack Russel race???? Ballerina dolls on sticks....wow...I had forgotten all about those....I remember the parades with the combine harvester sitting on the back of a large truck..oh those were the days

Wow, such stunning beauty. Love the pic of Vulcan Hotel. No sign of Mr. Spock from Star Trek, I presume. I'm inspired now to buy a yellow sweater. It looks great on you, Kay.

Good to catch up with you again, Kay.
Hope all OK with you.
LOvely story about the dog...or should I say "ghostly" dog??

dinzie - You're right - a real treat to go see (And on our doorstep - we must take advantage more often.)

McD - I know we had no return ticket ... :) There was something about those old A&P shows

Becky - It sure is a funny name for a hotel in heartland NZ! Thanks for compliment! Yes, go buy!

Jan- Thanks! Yes always good to catch up with you too!

Ah, Kay - what a wonderful post. Is it possible to feel "homesick" for somewhere only visited on the other side of the earth? We, too, have traversed that a way and stayed at "Top Tens". I shall always hold dear my recollections of our two holidays in NZ (if I had been a younger man I would have emigrated there on the spot!)
I doubt we shall ever get there again, but the photo disks hold some wonderful memories.

Thankyou for taking me with you on your trip.

Avus - I do understand that feeling (wrench) after having been somewhere you loved and then leaving ... you leave a part of yourself behind. I feel a little like that about the UK as we spent two years there (a long time ago, admittedly). We certainly feel like that about Japan too now - but we will definitely be going back there; having family there makes that a priority of sorts.

herhimnbryn - Thanks - glad you could make it along! ;)