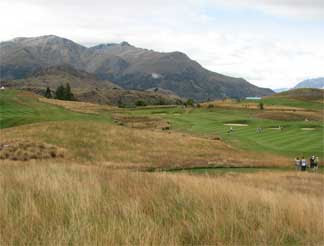 This land is now part of the Michael Hill golf course, but back in the 50's, it used to be Robert's aunt and uncle's farm. Robert's mother remembers walking across these paddocks from the small cottage they lived in for a short time, to visit her sister in the farm house, clambering through barbed wire fences to get there. Robert would have been only about 18 months old at the time. His father recalls that the cottage just had a rain-water tank and when that ran dry, they'd have to fetch water from the water race up the hill at the back of the house. There's a photo taken during their time there of Robert as a one year old playing 'dolf' with a wooden spoon. Quite prophetic really, come to think of it. 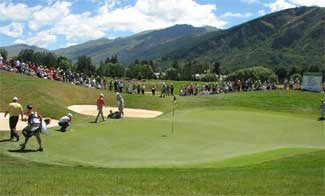 While watching the golf, I noticed the grasshoppers, daddy-long-legs, dragonflies and skylarks. (Skylarks appear to like golf courses). I kept picturing the place as it used to be; peaceful and lonely ...
Of course, to the insects and birds, nothing has changed. They still go about their business, despite the crowds following swinging golf clubs, temporary tents selling gold watches and BMWs encroaching on terrain they inhabit and feed off. It put me in mind of accounts of birds singing in the middle of war - of how soldiers on the battlefields could hear them still singing above the tumult of gunfire. 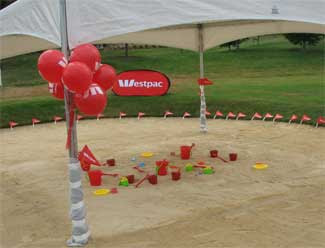 A bunker-like sandpit for the children. Not that were many children there. Pretty boring place for children, a golf course, I'd imagine. Especially when they hold up the 'Quiet Please' sign. 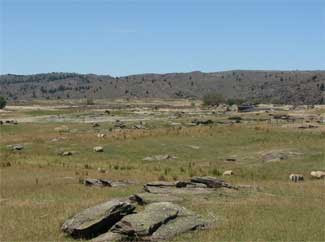 Near Alexandra on our way home. New Zealand's equivalent of a desert (rocks and sheep). I find this bare, rocky aspect very appealing. There is a poem in 'made for weather' in which I try to capture something of this.
near Alexandra
A western sky suggests
the promise of air loosely tethered
and space and light. Of breath
blowing through
the pleat of mountains.
Warm wind through wire.
Of opening out
an accordion of sun.
Kay McKenzie Cooke
- February 03, 2010

Lovely to see some of your poems appearing here again.
When the US President visited - was it Clinton? - I hear they had scuba divers in every pond on that golf course in case of assassination attempts :)

Thanks Catherine - I am going to have a poetry year, I can sense it in my bones!
Bizarre to think of frog-men in the ponds contrasted to what it was in the past - peace exemplified and with real frogs. :)

I like that 'pleat of mountain' that and the line break, v. clever.

Beautiful, both the poem and the former farm. I hope they got a good price for it!

Bah. I hate golf courses. A pestilence on the land.

Loosely tethered is wonderful Kay. And golf courses -don't get me started, we have the Trump scandal here, ancient dune systems being co-opted into another rufddy golf course!

Air loosely tethered exemplies so very beautifully the transience of all things beautiful. And yes, through the pleat of mountains, now reflecting the silence of the chattering.

It might have been even more difficult to have them fetch water from downhill. Did the rainwater last long?

Birds in a battlefield is surreal as well as melancholy.

Becky - So do I! (But it was years ago before large land sales etc - worth a mint now! sigh.

hemulen - Yes, BAh (in some cases) Thanks for visit!

Anna - I've heard about the Trump saga ... money stinks places up doesn't it?

Anil - I love all your comments - thanks so much!