Has the Weather Really Changed All That Much? According to Early '80s Entries, Apparently Not. 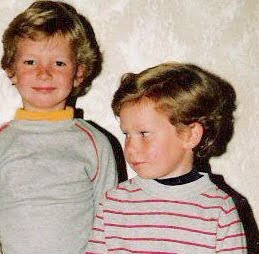 On this day (Dec. 4th.) in 1978 we were in Scotland and it was Monday. In my Five-Year Diary (one entry per page per year for five years) I wrote: 'Tricks of light today with a huge black cloud hanging over Aviemore and where the sun could get through or under, pools of light have lit upon a hill or part of the village. On our way back from the shops the light was golden and quite beautiful.'
Then down the page to 1979: (Tuesday) when we were back working in Dunedin, New Zealand, living in a flat in Duncan Street: 'Fine day today with a bit of wind. On Sunday we had terrible strong winds and the pot plants on the verandah blew over. Tonight we went for a run ... full moon above the town ... '
Then in 1980: (Thursday) when we had moved to Manor Park, Lower Hutt, Wellington and had just had our first baby son: 'Gusty weather. Had a long sleep this afternoon and felt better for it. Robert's very tired these days! He always goes and gets Steven when he wakes up through the night, and that's a great help. We're gradually learning all about what being a parent means'.
1981: (Friday) when Steven was just over a year old: 'A nice day outside, but I was stuck inside with a dreadful tummy bug. Stevie was excellent and played around in the bedroom, hardly grizzling at all. Robert arrived home at last!'
1982: (Saturday) when I wonder why I thought American basketballers wouldn't be nice? 'A lovely sunny day. Robert was playing basketball for St. Pats on an outside court. A lot of Americans there but they're nice!! It was nice in the sun. We all got sunburnt.'
And note the comment re all of us (that would include the babies) getting sunburnt - a major disaster these days! but back in 1982, just an indication of how hot it was.
However, by 1988 in another diary I note that my attitudes had changed - along with society's no doubt - when we were back in Dunedin and with three sons: Monday, December 5th: 'Today dawns bright, still and sunny. Perfect for the school picnic at Brighton beach. The water was so gentle and light, I could easily have gone for a swim. But there was seaweed and seagull feathers to find! I got sunburnt but the boys didn't as I'd covered them well.'
In 1989 I read an entry about how I was no longer going for walks (or jogs) on my own after an English tourist was murdered on Mount Maunganui ... A fear of walking alone in lonely spots that is still with me. New Zealand had lost its innocence; no longer was it safe for women to go jogging or walking alone, especially in isolated places.
I stopped writing in diaries in the early 1990s. Looking (and reading) back, the days when the children were little seem to be the happiest and most fulfilling times. As they got older and more independent and I began to forge a career for myself in Early Childhood, things began to become a lot harder. More angst-ridden. More complicated.
I still look back on those early days (when I was in my early thirties) as my best years, the happiest years.
Not that the present time is horrible. I have the time and space now to write, which I didn't have back then. I can sit back and chill with a glass of wine. Like I'm doing now, in a silent house and only the cat wanting to talk. (He's a tabby and tabbies are known for their cat-chat.) Robert will be back soon from having a 'few hits' out on the golf course. Just like back in 1979 and 1980, it is a day of gusty winds so it will no doubt be a battle for him out on the links course he frequents. And when he gets back we'll have a light tea and the night will quietly unfold and dissolve. Not a bad life. I should write an entry in the diary. Oh, that's right. No need. Now there's blogging.
- December 04, 2009

I lived in Manor Park for a while in the 1980s! More parallels. I should enjoy this time more too perhaps when my littles are still little

it must be wonderful to read on your past life...it fascinates me :-)

yeah no need for physical paper and pen...there is blogging

Kay, you were a poet, even at five! This is a wonderful accumulation of memories.

And, oh, a sweet picture!

Aren't old diaries great - and weird to look at too. I have some from around when I was expecting my first and second... was I ever that young/innocent/naive...?

But I feel that blogging will never take the place of a written diary (even though I have not kept one since my teenage). There is something about holding the book in your hands and reading your previous life's calligraphy.
"The Blog of Samuel Pepys" does not have quite the same ring about it. (I have his Diary and very enjoyable reading it is)

Are you able to see the iceberg from your part of the country? I saw that it is visible from one part of New Zealand but was uncertain of where-and cannot now remember where that was.
I miss the physical paper and pen at times as well--and then my hand cramps up while I write and I remember why I prefer typing! :)
Trying to get back into the writing process again. Enjoy your spring-into-summer!
Be well, Kay.