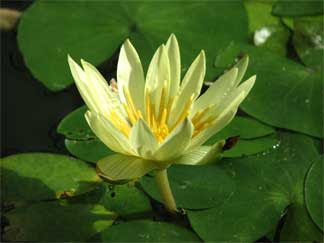 In a week we will be on our way to Japan. When I was a teenager I dreamed of travelling overseas. But Japan was not on my list. I was more interested in Europe and the United Kingdom. I got my wish to travel when Robert and I spent two years on a working holiday in the UK, working in hotels in England and in Scotland. In the summer of '78 we travelled through Europe in a VW combi van (called Herbert by previous owners.) Looking back it seems that we were young and fearless making our quiet way through Scandinavia, Germany, France, Spain ... freedom camping wherever and whenever possible and existing on a meagre diet of bread, cheese, salami, pate with some fruit and vegetables so as not to get scurvy. (We did try sausage in Germany - wurst - but being kiwis brought up on farm meat and three veges. followed by milk pudding, we weren't impressed by their so-called 'sausages'. Neither were we impressed by their heavy, black bread! It's different now that we have, along with other kiwis, been educated in European fare.)
So it is with some surprise that we find ourselves now, some thirty years later, off on another overseas 'adventure'. Very different this time though because it's only for three weeks, not two years. 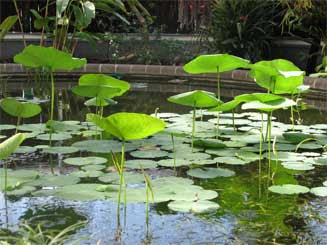 We always meant to travel again, but family and life got in the way, as it does, and the money was never there for overseas adventures. Little did we know that our oldest would travel to Japan to teach English (his famous, comforting words to me crying at the airport, "It's only for a year, Mum," still ringing in my ears!) After that year was up, he managed to get work for another year and then another. Then he fell in love with a young lady. In no time at all, the year had turned into four. His wife E is adorable, and so is their daughter, our awesome granddaughter, so we couldn't be happier for him. S loves living in Japan, with its safe and considerate society and we are over the moon to be taking the opportunity to go over and visit them and see Japan for ourselves. 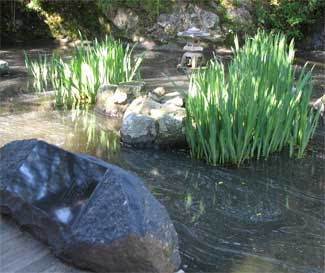 We do look back at the young travellers we were back in the '70s though and realise how fearless we were. This time we find ourselves fretting a little more. We seem to be a lot more nervous (and this is only for three weeks - not two years!) We didn't have to worry about liquids in our on-flight luggage back then. We didn't have to think about whether or not to take laptops. Mind you, taking photos will be a lot easier this time round. No film to worry about. Or expensive one-day developing. 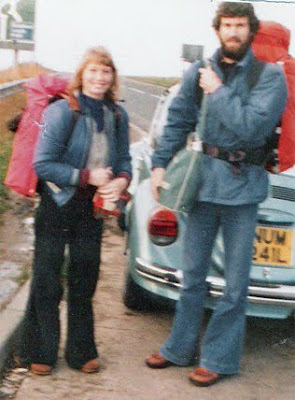 A faded, blurry photo of us taken by a lovely, kind, middle-aged couple (our age now!) from Huddersfield, who picked us up hitchhiking. We still send Dot a Christmas card each year. (I'm sure these days with that beard, Robert would be in danger of being arrested as a suspected terrorist!)

This time we have expensive, new suitcases, rather than two red rucksacks with the NZ flag sewn on the front flap. We are much older and no doubt sleep will overtake us much more quickly than it did when we were twenty-three. I hope our snoring doesn't keep our travelling companions awake!
- September 11, 2009

What fun you will have :O) I've always wanted to visit Japan :O)

Loved the photos, esp. the one of you and Robert! I am envious, and so excited for you!

I didn't know you had traveled so adventurously thru Europe. I'm sure you will LOVE Japan. Maybe your 3 weeks will turn into 3 years...? Say a quiet hello to my Shimi-chan's family as you pass by Kobe and Osaka!

That's a fantastic photograph of the two of ye. Both with huge grins, looking as though you're on the adventure of your life - and you are!

Enjoy yourselves in Japan. I expect to be reading some poems about that in the not too distant... :)

Wonderful past/present musings, Kay - like others who've commented, I esp. love the pic of you and Robert (and the fact you had an NZ flag stitched onto the cover flap of your backpack!).

I'm not long home after my weeks away and have been enjoying catching up on my blog reading - huge thanks to you for writing so generously about my exhibition in Chch. I went to see Cloud 9 on my trip back down from M. Sounds and thought Mike's work was the best in the show - you must be so proud. Lovely, too, that this happened before you & R head off to Japan - so many excitements for you! Looking forward to hearing your stories as they come to us from another side of the world...

Safe, rich travels to you both. xx

I missed out on the "big OE" as I was married at 20 to a man who had ample opportunity to travel on someone else's money (even if much of his time was taken up with work). I long for more than the month we spent in the UK in 2007. Not Japan though, when I was younger it was very much on my radar as a possible destination, however at the moment I am dreaming of the UK again, Peru, China, Egypt and African wildlife - most of which will no doubt remain a dream.

I'm sure you will have a lovely time and there will be many great photos of both the country and the granddaughter.

dinzie - well I guess we are in for a long time of Steve being away then!

Joyce - Will definitely say a quiet hello to your Shimi-chan's family as we pass thru!

Barabara Yes indeed, I trust there will be poetry fodder for me in Japan!

Claire - Thanks so much for your good wishes and your kind comments about mike's work - yes we are very proud.

Catherine - I do hope you get the opportunity of getting back to the UK and the other places you'd like to visit. We would love to get back to the UK too ... maybe one day ...

Japan is a place that held no interest when I was younger, but keeps 'coming up' these days as somewhere pretty special. Raymond's set his latest bee story there. And you're setting your own story there ... Have a wonderful time.

Pen - Thanks so much. That's interesting about the bee story set in Japan ... We are taking honey over to our d-i-l who loves our manuka honey.

Oh, I can hardly wait to read about your trip! Are you "boning up" for it--reading books, etc.? The only thing I've read is Memoirs of a Geisha and I'm sure that's not relevant. Love your pic with Robert. He's so tall!

Looking forward to hearing about Japan. We will go there one day. The culture and arts and crafts have always beguiled me.
Happy travelling ( even without a 'combi' this time).