Crickets the Size of Birds

Today (Saturday) I hit the wall and needed just to sleep. So I stayed behind with my d~i~l and granddaughter at home (S was working) while Robert went off on his tod to explore Kyoto a bit more, as well as catch a Louvre exhibition at the Kyoto Museum.
He took the camera and some of the shots featured came back with him. I looked at them a little woozily as I was still in recovery from a nightmare about being on board a jet that because of some runway emergency situation, had to take off suddenly just after landing. I think the dream was telling me that today my exhaustion was a form of jet lag ( a little latent, but real enough for all that.) 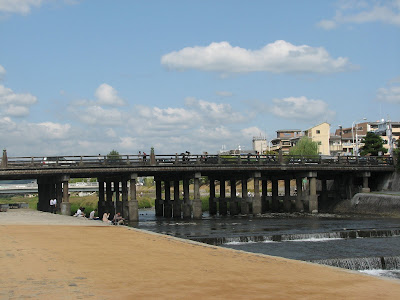 One of several Kyoto bridges that span the river ~ this is the most famous one (the name of which I haven't remembered, and as everyone else in the house is asleep, I can't ask them.) It's where people (usually couples) sit quietly together on the bank at night and reflect on things (or whatever it is couples do quietly murmuring together on a riverbank) as the water wanders past. We first experienced this area on our first night here (a public holiday night) when it was a lot busier, with an atmosphere of history, anticipation and peace all rolled into one.
At the moment here, the autumn weather is warm and mild and the air at night velvet-soft. On holidays and weekends, the calm, mild weather is conducive to strolling along the bank, eating out at the many restaurants that line this part of the river, and generally meandering, or sitting and watching the water. 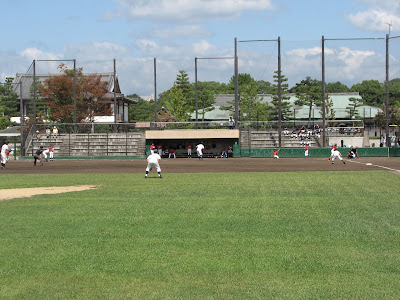 Being Saturday, there were kids playing Saturday sports - in this case, baseball. Steve told us that grassed playing fields are very rare. He made the wry comment that playing rugby on gravel is a little painful. 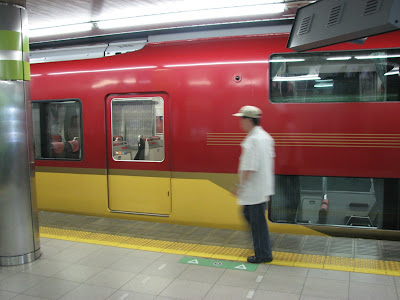 We are going everywhere by train - Robert was taken by this one; a double-decker train if you please. The train service is immaculate and precise. 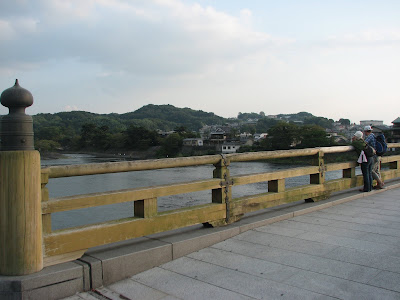 This photo is from Friday when we visited Uji, the place where the classic story 'Tales of Genji' was partly set (the last ten chapters.) This is the Uji Bridge which features in the story. This story was written by a woman in the 11th century and is about a 'playboy character' as E described him ... which isn't far from the truth. I couldn't begin to try and explain the very convoluted plot (even the potted version is extremely complicated). It features beautiful illustrations that are typical of classical Japanese art. 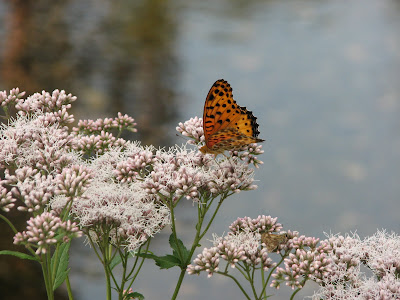 And this is why Japan is the origin of haiku - everywhere, nature's small moments are there for the capturing among the hustle and bustle and everyday cares of the world, there are butterflies ... 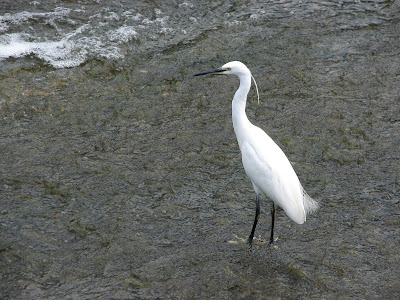 and herons (on Kyoto city river). 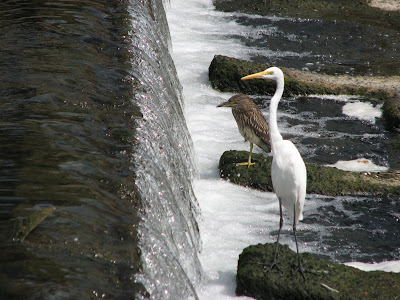 Look closely - there's a brown bird sitting beside this heron - yet to be identified by me (anyone know what it is?) 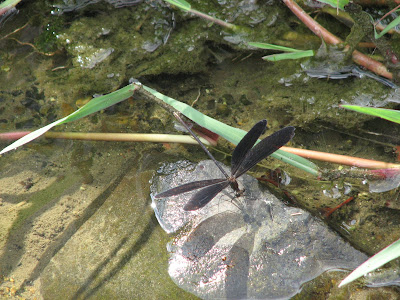 ... and dragonflies ...
And today on a walk, E and I saw a HUGE green grasshopper - unfortunately I didn't have the camera with me (smack hand.) The crickets here chirp like birds, and apparently are the size of birds too. 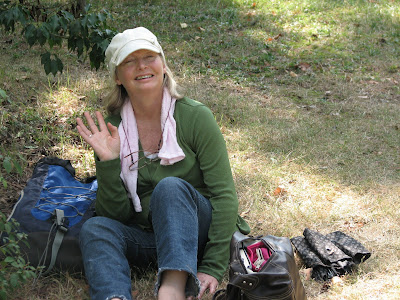 As well as Uji museum on Friday, we went to the golf tourni. Well, I actually spent most of the time sleeping under a pine tree, listening to the crows go 'Cor!' after every good shot I was missing.
Note the towel around my neck - a great Japanese trick for humid days. A small, soft towel is SO good for keeping the neck and face dry. (You also discover that paper fans are more than just pretty souvenirs.) 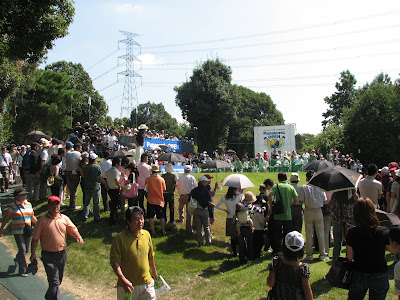 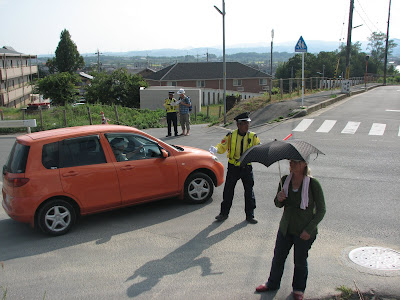 Note our son Steve asking a traffic director for directions. We were put wrong in which shuttle bus to catch in order to go to the museum from the golf, and ended up walking for twenty minutes out of our way in the humidity. I was very grateful for the umbrella E had sent me off with. "It's for both rain and sun," she told me. I didn't feel odd because every other woman seemed to have a black umbrella too. Back home in NZ it would be considered strange having an umbrella up on a sunny day (but I don't know why as it is extremely practical and effective.) 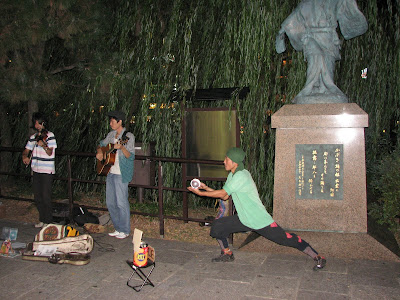 Tonight we went into Kyoto city again for dinner and to visit the Gion district where there is a famous shinto shrine. At the station these buskers were playing Irish jigs. Very surreal. With supple hand movements, the guy in the green t-shirt was making a see-through sphere appear as if suspended in mid-air. You could get your palm read - if you understood Japanese.
Another great day in Kyoto. Tomorrow I plan to have coffee with a friend (yes! even over here it's become possible!) and shop and take in some more of Kyoto's rich classical beauty, small moments of nature, its quirkiness, its craft, its history ...
- September 27, 2009

Oh my...what strong memories these photos and your descriptions bring back to me. I'm very nostalgic, almost to tears. Japan was my second home--and I do still miss it sometimes.

I am so glad you are having such a wonderful experience. Thank you for gracing us with the photos and the memories.

Wow. You are REALLY there! In JAPAN! Thanks for sharing!

Great reading :-) so easy for the jet lag to catch up if your on the go go go from the moment you land :-)

In Hong Kong we carried umbrella's due to the sun too....absolutely normal...and I too wonder why we dont do it over here.

but the towel around the neck....never did that one :-)

It's very hard to stop when in such a place eh ... Jet lag is a terrible thing... I fall asleep mid sentance :O)

The brown bird is probably a striated heron - called mangrove herons in Ozz..Looks like he may be a juvenile

We hope to go to japan in a couple of years, so our posts are making for great reading.

Good idea about the towel!

We saw lots of people carrying umbrellas in Singapore - not always black though, some of them were quite colourful.
I'm really enjoying reading about your travels.

It has been a long time. I like the new site. I just heard a Tsunami might be headed your way and I am concerned. I hope you are safe!

Shani ~ Thanks so much for that ~ I have been thinking of you and your connection to this country. Glad I am reporting back responsibly!

Joyce - I know = it still seems a little surreal!

McD ~ I wil keep posting ~ the encouragement to do so comes from the comments and feedback ~ like yours.

DInzie ~ Thanks for bird ID! We thought it might be a young heron, so weren't far off the mark. Jet lag has abated somewhat. Still got my watch on NZ time tho!

herhimnbryn ~ I hope you have as great a time as we are having ... it's a truly amazing country and society.

DOna ~ Lovely to haer from you! I sent you a reply by email ~ hope you got it. Will pop your blog on my blogroll ...

Great photo of you! Love the herons and the butterfly - yes, I can see why haiku thrives there.

I think the wee bird might be a bittern?